Born on December 13, 1887, Alvin York was an impoverished farmer’s boy, who was accustomed to the violence of Tennessee – a place where people would take out their frustration by drinking, gambling and brawling. York was no exception, but in 1915, he abandoned his past of violence and dedicated his life to the Church of Christ.

Two years later, news of America’s entry into the World War reached the little Smoky Mountain communities, and it was not until early June 1917 that the call came to register for the draft.
York sent his draft card back, having written on it: “I don’t want to fight”. He even wrote a letter explaining his religious beliefs – beliefs that wouldn’t allow him to join the war. But the draft board rejected his letter, arguing that the Bible was open to interpretation and war was a big part of it anyhow. York was left with no choice and was sent to join the 82nd Division for basic training in February 1918.
Today, the 82nd is renowned for its accomplishments as an Airborne Division in the Second World War, but back in 1918 they called it the “All-American Division”, made up of men from all over the states. At first it had been southerners like York, but soon the division was filled with men who were considered too troublesome or unruly for other divisions, many of them recent immigrants from Europe, who hadn’t been in the country long enough to speak fluent English. York wasn’t very popular with the others because of his rigid religious beliefs, especially not with his superiors, but he did what he was told. He was a natural soldier and a remarkable marksman.

By September 1918, York and the 82nd were in France and had taken part in the Saint-Mihiel offensive. They now prepared to join the great allied counteroffensive that was to break the German positions in the Argonne Forest. On October 3rd, near the ruins of the village of Varennes-en-Argonne, they marched out. French artillery batteries were shelling the forest though, and were unknowingly hitting their own troops trapped there. There were even rumours of a lost battalion of men that was surrounded and about to be wiped out in those woods. 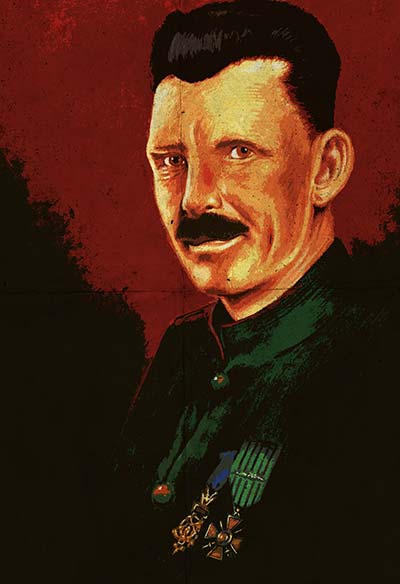 The American public was waiting for such a story. The big press agencies wanted eyewitness stories from the reporters, and there was a lust for sensation among the public back home, which knew little of the war in Europe and hungered for news and first-hand accounts. For the reporters, it mattered little whether the story was about a hero or a tragedy. Either made good headlines. No-one could have guessed that they were so close to the two biggest American stories of the war.

It didn’t take long for York’s battalion to find the enemy. As the doughboys surged forward, they were hit by heavy fire from machine guns and mortars from a place identified as Hill 223. This was a major German position, and York’s men were to cover the flank as the hill was taken. But as they were about to mop up resistance in the woods, a German counterattack struck, driving them back up the hill, where a ferocious battle for the crest was fought. The Americans prevailed but York found himself standing at the top of a hill, surrounded by the dead and wounded. Sleep did not come easy after that, but York sought refuge in the bible.

The night of October 8th, as the Lost Battalion had finally been found and the survivors were leaving the forest. It was York’s turn to move back in. It was not until the early morning that they were back at Hill 223 and the German shells were falling again. Under heavy gas attacks and mortar fire, panic began to surge, but panic is best fought off by action, and bayonets first, they rushed into the woods.

York’s platoon was cut in half by a German machine gun and the survivors broke off the attack. Despite the terror, York rallied his squad and moved through the thick undergrowth and thorny bushes in an attempt to outflank the enemy position. But the forest was a maze and the squad soon lost all sense of direction. As they emerged from the next line of bushes, they encountered two German medical orderlies. After a shared moment of disbelief, the Germans bolted. York’s men, cursing and firing, gave chase.

Running through the woods and thick bushes, they unknowingly went deep into German territory. Having lost the German medics, they emerged in a small clearing with dozens of German soldiers in front of them chatting or having a meal. A lot of them were shirtless. But as they noticed the Americans with their menacing rifles and bayonets, they threw everything to the ground and their hands in the air.

York and his men, greatly outnumbered by their new prisoners, were about to search them when they were spotted by a German machine gun nest which began firing into the crowd, hitting friend and foe alike. In the chaos of bullets and screams, York’s best friend in the battalion was hit and went down in a pool of blood. 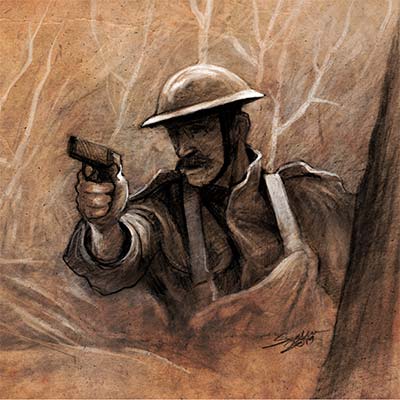 And then he snapped

The mild-mannered, god-fearing Alvin York simply snapped. Anger and fury took over. As everyone else scrambled for their lives, York dashed forward, rifle in hand. He pushed up the hill, circling around the machine-gun nest until he was atop a ridge overlooking the German position. York raised his rifle and pulled the trigger. One by one the Germans went down. He killed them without mercy but with extraordinary precision, until the machine gun was silenced and 19 dead Germans lay dead.

As York took a moment to survey his work, another group of Germans burst from the bushes, bayonets first. Caught off guard, York dropped his rifle and drew his .45 pistol. After shooting the leader from just a few feet away, he kept on killing and killing. Dead Germans lay all around him, and all went silent. A German Lieutenant slowly got up, his hands raised. York kept his pistol aimed at the man’s head. In a strong German accent, the German officer’s voice trembled: “If you stop shooting, I will make them give up.”

York kept his finger on the trigger, staring like death himself into the eyes of the German, ready to end his existence at any moment. Slowly the German officer took a whistle out of his pocket, blew into it and then yelled an order towards the bushes behind him. One after the other, German soldiers began appearing from behind the trees and bushes. So did the remaining Americans, who had finally caught up with York. Seeing his men, York calmed down for a moment, but then a German soldier threw a hand grenade into the crowd. He missed York, but York did not miss him, shooting the man dead on the spot. The other Germans offered no resistance.

They began leading the column of prisoners back down the way they came, guarding them warily, as they were clearly outnumbered. They made their way through the maze of woods, and another German platoon crossed their paths, but they were exhausted, and, astonished by the situation, they gave up. A short walk after that they encountered yet another group of Germans who raised their weapons, ready to shoot. Only York, pressing his pistol into the back of the German lieutenant, convinced them to think again, and all of them except for one young German soldier clinging to his rifle, dropped their weapons. York shot the boy dead without hesitation.

Finally out of the woods, they marched to Hill 223, where perplexed American soldiers stood and watched the spectacle of 132 arriving German prisoners, captured by York and a handful of doughboys. The story spread among the men, but the American journalists were, for the most part, busy copying the reports coming from the Lost Battalion. The newly promoted Sergeant York remained unknown to the American public for quite some time.

Mere chance or God’s will?

York was proud of his deeds. He did, in fact, do what he was told and he did it well. The war itself however remained a mystery to him, and he could not make sense of all the carnage and destruction. In the days after the battle, he walked the forest, accompanying medics and stretcher bearers looking for survivors among the dead. Where did God fit into all of this? Who was to live and who was to die? Mere chance or God’s will? Did someone guide his hands in this? 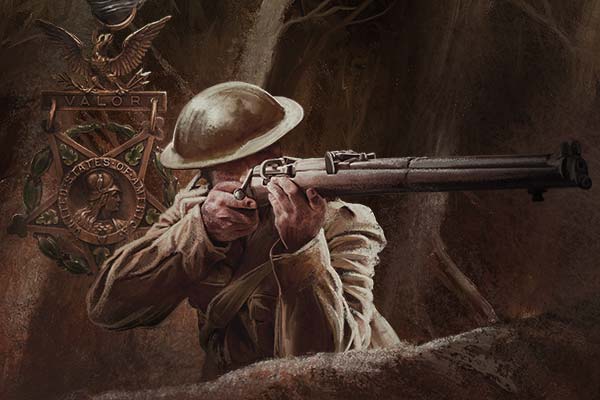 It was not until April 26, 1919, over half a year later, when the Saturday Evening Post published his story. Overnight, Alvin York became one of the biggest American heroes. He was seen as All-American; as a warrior-monk who answered the call to come to America’s aid.

When York arrived back in the States on May 22, he, like the men of the Lost Battalion before him, was greeted with a hero’s welcome and was paraded through the streets. Newspapers, magazines and newsreels spread his story far and wide, and he agreed to paid speaking engagements, telling his story wherever he went. He received dozens of medals, some from France and Italy, and even the Congressional Medal of Honor.

Money wasn’t an issue anymore, at least for the moment, but York refused many offers from businesses that tried to profit from his fame through advertising. Instead, he would return to rural Tennessee, buy a farm and open up a Bible School to educate the local youth.

Still, the thoughts of that fateful day would keep him awake at night. Once, he had forsworn violence and given his life to God and the peaceful teachings of Christianity. He never wanted to go to war. And once he was there, among all the death and destruction, the war had brought back a side of him that he very much wanted to forget.

Alvin York died of a cerebral haemorrhage at the Veterans Hospital in Nashville at the age of 76.

Alvin York’s incredible story heavily inspired our song ‘82nd All The Way‘. Take a look at the lyrics we wrote here.

If you prefer a visual representation of this story, watch our Sabaton History episode on Alvin York and the 82nd: