The Scots fought for their independence from the English invaders for over 30 years before their final victory, and a major step on that road to victory was the Battle of Bannockburn.

The Scottish defeat in the Battle of Falkirk in 1289 at the hands English had seemingly destroyed the Scottish Independence movement once and for all. William Wallace had abandoned his title as the Guardian of Scotland, embittered by the Scottish nobles who had betrayed him during the battle. On the run, he was again betrayed and handed over to the English, who emasculated, strangled and quartered him in 1305.

The Scottish earls surrendered and swore their fealty to Edward I of England, the one they called Longshanks, but there was a still a strong anti-English feeling throughout the country, with nobles still plotting an insurgency.

Such a noble was Robert Bruce, also known as The Bruce. He was the formal Earl of Carrick and the 7th Lord of Annandale, and had a strong claim to the Scottish throne, but also many enemies among his fellow Scots.

In 1306 Bruce made his move and secured the throne, and once crowned King of Scotland, rallied the Scottish earls for war on England.

With high hopes, he led his forces into the field. His army got absolutely destroyed during the Battle of Methven. In fact, Bruce barely escaped with a small band of loyal followers. His army was gone, his lands were confiscated and distributed among his Scottish enemies, his wife, sisters and daughters were captured and imprisoned, and his brother was tortured and executed.

But from Bruce’s darkest hour emerged one of the greatest comebacks in history. Robert Bruce returned from his hiding place in the Western Isles where he recruited new warriors to his cause, and began a relentless guerrilla war against his enemies, raiding English camps or ambushing their supply lines. They hid among the locals, who also hated the English oppressors. Robert Bruce became a tactician, finding the weak points of his enemies and using the terrain to his advantage. He took back his castles and gathered ever more supporters for his cause. One by one, he destroyed his internal enemies on the battlefield and took their strongholds, making him an actual King of Scotland once again.

Of course, this war did not escape the attention of the English throne. By this point, Longshanks had died, and his son Edward II was king, but until 1314 he was distracted by his own internal enemies and his affairs in France.

He understood that the new King in the North was a serious threat to England’s frontier, so Edward assembled an army of over 18,000 men, among them heavy cavalry and Welsh longbowmen, and led them to crush the Scottish rebellion once again. 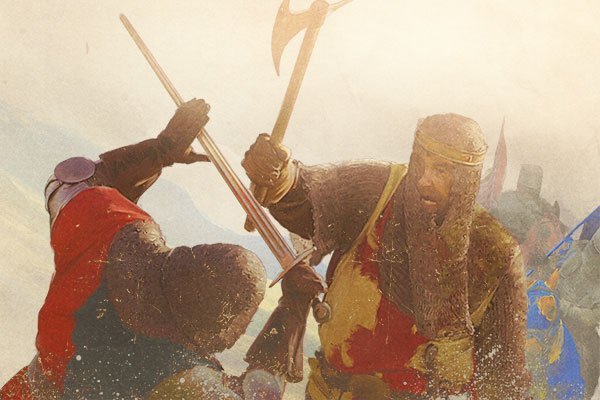 At this time, Bruce had Stirling Castle, the old residence of Scottish kings, under siege. It not only had strong symbolic significance, the position of the castle, between the streams Bannock Burn and the River Forth, was also of strategic importance. Philip de Mowbray, the castle governor, was loyal to the English crown. The legend has it that he said he would surrender the castle to Bruce if the English did not relieve him by the end of June. Well, on June 23 the English army – led personally by Edward II – arrived outside of the village of Bannockburn on the other side of the stream.

Robert Bruce was now determined to fight a decisive battle. His army was probably around 8,000-10,000 men strong, and consisted mostly of infantry, some crossbowmen and a few cavalrymen. He was outnumbered at least 2:1 (historians disagree on how much of the English army had arrived by the battle) so Bruce would have to rely on the tactical experience he had gained during his guerrilla campaign.

The story of the Battle of Bannockburn goes that the vanguard of the English army crossed the stream and encountered Robert Bruce and his bodyguard.

The Scots had made defensive earthworks that formed a bottleneck on the road to and through the woods, so the English could only launch a narrow frontal attack. These earthworks also neutralised the English advantage in heavy cavalry. The English nobleman Henry de Bohun, whose father was joint commander of the vanguard, spotted The Bruce and charged him with a lance. The Bruce turned at the last moment, and won the duel by way of ‘battleaxe-to-the-face’. The Scots then routed the Vanguard infantry.

Bannockburn is not a large river by any means, but it is lined with swamps, marshland and dense woods, through which the armoured English had to struggle. The Scots, on their side, were hidden in the woods. When the English attempted to cross the stream, the Scottish infantry would advance as well, in tightly packed formations, known as ‘shieldtrons’ (or ‘Schildthrons’). They carried spears and pikes, and as long as they maintained formation, the English heavy cavalry, also limited by space from getting up speed, could not hope to charge them and live through it. Nor could they outflank them. As night fell, the English camped in a deep marsh and remained awake for the most part, fearing an ambush that never came.

The following day, June 24, Edward II drove the rest of his army across the stream.

Bruce moved his whole force out of the wood in three formations. The English now realised that the field was too small for them to fully deploy, so the archers who would normally have been on the flanks, were now placed in the front rank. They opened fire as the Scottish advanced. Bruce ordered his cavalry to charge them, which prompted Edward to order a counter charge with his own cavalry. This blocked any possible storm of arrows. The Scottish formations did not break, and the English charge went horribly wrong.

The Scots infantry advanced, pushing their enemy back into the steep-banked ditch of the Bannockburn, where the English soldiers were trapped by the weight of their armour and slaughtered. Edward’s bodyguards barely got their lord away from the fray, and many famous English knights fell prey to Scottish pikes or were captured for ransom.

Seeing their king flee the battle, the rest of the English army turned their backs and ran as well. Stirling Castle surrendered, and much of the fleeing army was killed making its way back to the English border, either by Bruce’s pursuing army or by the local inhabitants.

It is estimated that the English lost over 10,000 men, perhaps many more, and the financial strain of the ransom of over 150 nobles weakened Edward’s rule. The battle destroyed England’s ability to fight the Scottish for years, leaving Northern England vulnerable. Robert was really THE Bruce at this point, as his name became legend. His authority after the battle was unchallenged. This was the main turning point on the road to Scottish independence, which was signed by treaty with King Edward III, Edward II’s son and successor, after Robert the Bruce invaded Northern England in 1328.

The story of The Battle of Bannockburn heavily inspired our song ‘Blood of Bannockburn‘, which is featured on our album, The Last Stand. Take a look at the lyrics we wrote here.

If you’re interested in a more visual interpretation of this story, watch our Sabaton History episode, Blood of Bannockburn – War of Scottish Independence: