Six months after the attack on Pearl Harbor, the US Navy delivered a decisive defeat to Japan in a four-day battle near Midway Atol in the Pacific. The battle severely weakened Japan’s navy and is considered a turning point in WWII in the Pacific.
JANFEBMARAPRMAYJUNJULAUGSEPOCTNOVDEC
4 Jun6 Jun23 Jun

The Battle of Midway is a famous naval engagement that marked a significant turning point in the Pacific Theatre of World War II. The battle, fought almost entirely by aircraft and often described as one of the most decisive naval battles of all time, saw the United States of America destroy most of Japan’s aircraft carriers and best trained naval pilots. This highly tactical battle effectively ended the threat of Japanese invasion in the Pacific and inspired the Sabaton song Midway, from 2010’s Coat of Arms.

Six months after the attack on Pearl Harbor, which brought the United States into World War II, Japan had designs on capturing Midway Atoll and bases in the Aleutians to provide a strong foothold in the Pacific and to eliminate the US as a strategic power in that area. Japan – who was by that time the dominant power in the Pacific after capturing territories including the Phillipines, Malaysia and Singapore – had the stronger fleet in that area, and the Imperial Japanese naval commander Admiral Yamamoto Isoroku ordered the majority of the force, including four heavy and three light aircraft carriers, to invade Midway. As well as being an important US submarine and seaplane base, it was considered an easy target as it was out of range of the majority of the US fleet that was stationed at Pearl Harbor and the Hawaiian Islands, and the Japanese felt that a total defeat at Midway could demoralise the Americans enough to withdraw from further engagement in the Pacific. 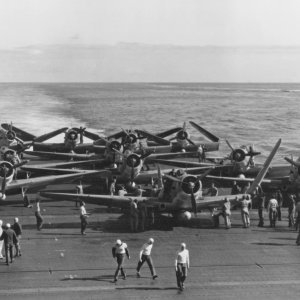 Yamamoto’s plan was meticulous and well-coordinated, but US codebreakers had broken the Japanese JN-25 naval code and provided intelligence of both the date and location of the attack, so the US was able to muster ships and prepare an ambush, with three heavy aircraft carriers – including the Yorktown, which was hastily patched up after sustaining damage in the Battle of the Coral Sea a few weeks earlier – stationed 350 miles northeast of Midway to await the arrival of the Japanese, plus 115 land-based planes ready to fly from Midway and the closest Hawaiian islands.

The battle did not begin well for the Americans. The land-based bombers from Midway made an unsuccessful attack on the Japanese, which failed to damage the fleet and prompted heavy bombardment of Midway by the Japanese. However, the Japanese fleet was organised for attack, not defense, as it had believed its attack on Midway would be a surprise. Its aircraft carriers were only able to send one wave of planes at a time and was unable to disable the runways on Midway, which remained operable and continued sending more planes into the fray alongside planes from the US carriers, with a new wave of planes every few minutes throughout the morning of 4 June. For the Japanese attackers, the logistics of bombing the island that was their target, avoiding the US planes that were defending it, and launching yet more planes to try to sink the approaching US ships that were now in sight, were overwhelmingly complicated.

Despite one wave of US torpedo bombers being completely destroyed during an attack at 9.20am on 4 June, a second wave of US planes just over an hour later caught the Japanese carriers while they were preparing another wave of aircraft, and three heavy carriers and one heavy cruiser were sunk in a devastating attack. The fourth and final heavy carrier, the Hiryū, would be disabled that afternoon, leaving the Japanese fleet devastated. 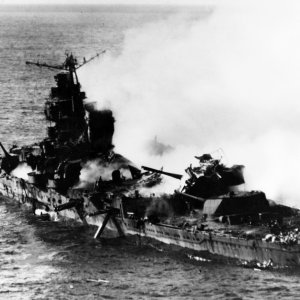 The only US ship that was lost was the Yorktown, which was disabled and abandoned at approximately 3pm on 4 June after two attacks sent from the Hiryū approximately two hours apart. After the first attack, the Americans found themselves patching up Yorktown for the second time in only a few weeks, doing such a good job that the second attack from the Hiryū was mistakenly thought to have hit and disabled a separate aircraft carrier. The Japanese then began to muster all remaining planes for one final strike on what they believed was the last remaining US carrier. In the meantime, however, the Americans launched a strike that succeeded in hitting Hiryū with a number of bombs, starting a fire and rendering her unable to send any more aircraft. The Hiryū would sink the following morning, 5 June, and its strategic commander and ship’s captain, Rear-Admiral Tamon Yamaguchi and Tomeo Kaku, both chose to go down with their ship.

Two days later the Yorktown, which had been assessed to be salvageable, was torpedoed and sunk, along with an accompanying destroyer, by a Japanese submarine, but by that time the battle was already over – the Japanese had begun the retreat on the night of 4-5 June. The main action had undoubtedly taken place on the first day of the battle, and during the days that followed the US and Japanese fleets would play a tense game of cat and mouse as the Americans searched for the retreating Japanese, claiming a few further ships that became separated from the main body of the fleet.

In addition to its sunken ships, the Japanese lost 240 aircraft and more than 3,000 men, compared to the American losses of 150 aircraft and 307 men. These losses brought the Japanese and American force to almost equal strength, although Japanese media initially reported a victory, with the public and most of the armed forces kept in the dark about the defeat, casualties from the battle being treated in secret and the survivors immediately shipped off to other units. The battle did prompt the Imperial Navy to update how it refueled and re-armed its planes, and to train its men to fight fires on deck. It also introduced an accelerated training programme to replace their lost pilots, but this proved ineffective, with inexperienced pilots gaining their wings at a time when the US forces were becoming ever stronger with experience. 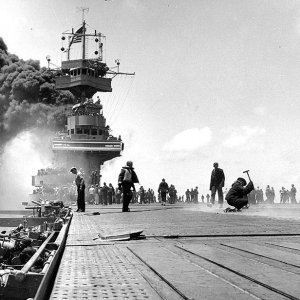 Historians are divided on whether the losses at Midway were truly crippling to the Japanese, who had a vast fleet and many pilots, but it is widely agreed that the defeat put them on the back foot and enabled the Allies to take the lead strategically. By 1942 the US was well under way with a major shipbuilding programme and in the time Japan took to replace three of the aircraft carriers lost at Midway, they had commissioned more than two dozen. With their superiority in the air and at sea lost, the Japanese would never again launch a major offensive in the Pacific.

In the years since the battle, historians have attempted to study the site but the depth of the ocean has prevented them from finding all but one ship – the Yorktown – which was located with the help of US and Japanese veterans in 1998 and photographed for the archives. An expedition a year later found part of the upper deck of the Japanese carrier Kaga, but the remainder still lies undiscovered.