Battle of the Yser begins

The Race to the Sea

It was September 1914 on the Western Front. The giant armies of the Entente and the German Reich were locked in a desperate struggle for survival, just six weeks after the Great War began.

People can’t fathom how deadly the opening battles of the war – when it was a war of movement – actually were. On August 22, 1914, for example, the French had 27,000 men killed. Not total casualties, but killed. For the entire rest of the war, that would remain the highest single day death toll any nation took during the whole war.

The initial plans of both sides soon failed and the beginning of a deadly stalemate set in. Both sides looked north, trying to find the last open gaps in the line. Whoever got there first; whoever put enough weight behind their punches to outflank the other side, might still be victorious. This was the ‘Race to the Sea‘.

“We are about to engage in a battle on which the fate of our country depends and it is important to remind all ranks that the moment has passed for looking to the rear; all our efforts must be directed to attacking and driving back the enemy. Troops that can advance no farther must, at any price, hold on to the ground they have conquered and die on the spot rather than give way. Under the circumstances which face us, no act of weakness can be tolerated.” – Joseph Joffre. 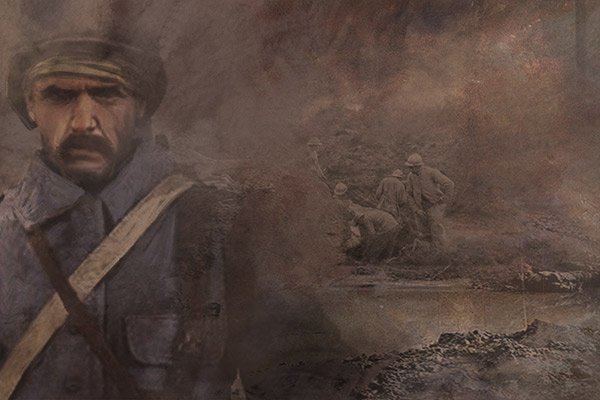 On September 4, 1914, the German advance into France changed its axis. The First Army under Alexander von Kluck began wheeling around in a wide swing southwest, as part of the Germans’ Schlieffen Plan. Sensing an opportunity, the French Sixth Army made a move towards von Kluck’s now exposed flank. The First Army turned to face the French advance, but in doing so, they created a gap of 50km between them and the German Second Army on their left. The French Fifth Army and the British Expeditionary Force threw themselves in for a counterattack into this gap.

What followed was one of the most decisive engagements of the Great War. Perhaps the decisive one.

German High Command had to either continue the advance and risk being outflanked and enveloped or stop and withdraw in the hopes of straightening the line. They chose the latter. On September 9, for fear of losing the war to the Allied counterattack, they ordered the northern wing to halt and fall back. The Battle of the Marne, as it would be remembered, was a major strategic triumph that had prevented the Germans from driving to Paris. The German First and Second Armies were forced back behind the River Aisne and dug in on the heights of Chemin des Dames. In hot pursuit, the French Sixth and Fifth Armies hoped to capitalise on their victory, but the troops were exhausted and ammunition was low. When they arrived at the Battle of the Aisne, they were facing a line of German trenches on the heights, with artillery support. No chance to breakthrough. On September 14, the Allied armies dug in.

Why dig in? Well, machine guns and modern artillery had changed the face of war. You simply could not survive being exposed, and a man in a hole in the ground can only be bombed with direct hits. For all the horrors of trench warfare, it was still way less deadly than mobile warfare, and significantly harder to overcome.

Paris did not fall as envisioned, but the German attacks had succeeded enough that the German Army now stood deep inside French and Belgian territory. A static line of defences emerged on the Western Front, from the forts of Verdun, all the way to the south, down to the Swiss border. But in the north, between the Channel ports and the River Aisne, there was still room to manoeuvre. If the Germans were fast and strong enough, they could still turn the French flank. If not, they could at least still capture the important ports of Dunkirk, Zebrugge and Calais, as well as the vital railway between Hazebrouck and Roulers.

The French, of course, realised what was about to happen, and they had not only saved themselves at the Marne, there was now a chance to turn the tables. If the French Army concentrated enough force to the north, the whole German offensive could collapse like a house of cards.

Time is of the essence

Now, the name ‘Race to the Sea’ is misleading. No one was really interested in reaching the North Sea. In fact, both sides needed to execute a swing well before that. Consequently, the commanders pressed all available reserves into the move northwards. The German 4th and 6th Armies were pointed northwards “to advance without regard for casualties.” And the French organised Army Group North, of the Second and Tenth Armies, with the mantra “Attaque! Attaque! Attaque!” Time was of the essence.

On September 17, the German 6th Army began moving north, yet as they tried to circle around to the west, the French were already there to meet them. Intercepted radio traffic had alarmed French High Command, who were committing three corps to match the German advance. What followed was the indecisive Battle of Flirey on September 20, ending in the Germans creating the St. Mihiel salient. It was the first of a series of bloody engagements as the armies shuffled northwards. It resembled a boxing match, with each side throwing wide hooks, hoping to exhaust their opponent with the next swing. Troops pushed forward as fast they could. Eventually they clashed with the forward forces of their enemy and a series of encounter battles were fought on the move. Then both sides dug in, holding out until reinforcements arrived, and the whole cycle would repeat itself once more. To the north, ever to the north.

The Battle of Picardy

Between September 25 and October 4, the Battle of Picardy was fought. The French Sixth Army clashed with the German First Army north-west of Compiegne. But by now, both sides felt the loss of their assault divisions. The first month of the war had cost them hundreds of thousands of casualties, foremost among the well-trained professionals. Now the fight was carried more and more by half-trained wartime volunteers. Young men, swept away by their enthusiasm, were thrown into the jaws of artillery and machine guns. They could simply not execute the tactical manoeuvres of fire and movement that had been drilled into the professionals. Yet their commanders spent their lives all the same.

The Battle of Albert was fought from September 25-29, as the German 6th Army continued to move towards Amiens. Hopes were high of crossing the river Somme fast enough to envelop the French left flank. But once more, the French were onto them. Their Second Army prevented the major turn just in time, preventing the Bavarians from achieving a breakthrough.

The end of their tether 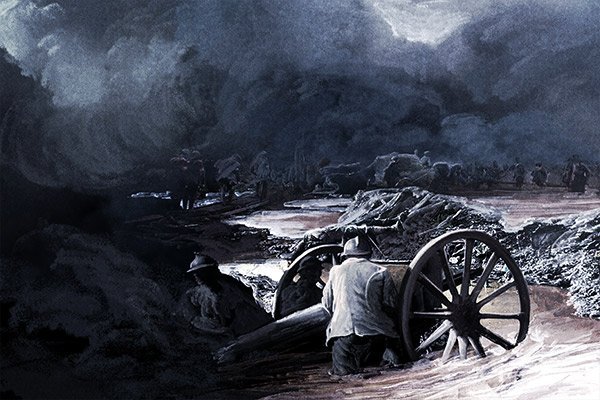 By the end of September, both sides had reached their physical limits.

The weather and the supply situation were simply horrendous. Men were marching 30 or 35 kilometres each day, often on empty stomachs, and were still expected to fight. It was pure chaos, and the heavy cloud cover prevented any recon planes from taking off. The only way of scouting ahead was with cavalry, and smaller screening forces constantly clashed along the routes and rivers, trying to deny each other room to manoeuvre.

The Battle of La Bassée, beginning on October 15, was the final attempt for the decisive swing. As the German 6th Army successfully pushed into Lille, they began to threaten the British Expeditionary Force at Ypres. If they were outflanked, they might lose their ports at the coast. In a pre-emptive strike, the British advanced into Armentiéres and prepared for a stand at the River Lys. Fighting fiercely in heavy fog, the British were able to defend the crossings and the approaches from being exploited by German cavalry. The timely arrival of the Indian Corps helped them to hold out until the Germans exhausted themselves. They might have fielded the largest army in their history so far, yet they couldn’t funnel in troops forever.

By November they had conceded. German High Command put a stop to the major advances as the last gaps on the map were being closed. The constant attacks northwards had failed in forcing the decisive battle. Ypres was out of reach, their forces were exhausted, ammunition and shells at their limit, casualties enormous – each attempt was quickly foiled by entrenched machine guns and artillery, and the Belgians had flooded the Yser Canal. The Germans had lost the Race to the Sea.

The Entente and the Belgians had dashed the German hopes of continuing the Schlieffen Plan and executing a major envelopment of the French left wing. They had successfully established a continuous defensive line from the Belgian Coast to the Swiss border, but they had also failed to capitalise on the momentum gained by the victory at the Marne, and decisively overtake the Germans in the north. In this, they too had lost the Race to the Sea.

As the days grew colder and the weather worsened, both sides continued to dig in. Ypres was still under threat and would be for the rest of the year, but the end of the Race to the Sea had ushered in a new phase of the Great War: Trench Warfare. Troops went from improvised fighting holes and trenches to ever more sophisticated trench lines and mazes of barbed wire and machine guns. Cooler heads might have looked at the situation and realised the deadlock they were now in. But neither the Allies nor the Germans were making a move to call an end to the fighting. Instead, they put their hopes into gathering some strength over the winter. The decisive battle would surely be fought in 1915.

The story of The Battle of the Yser heavily inspired our song ‘ Race To The Sea ‘. Take a look at the lyrics we wrote here.

If you’re interested in a more visual interpretation of this story, watch our Sabaton History episode, Race To The Sea – The Failure of the Schlieffen Plan: