The Battle of Vienna 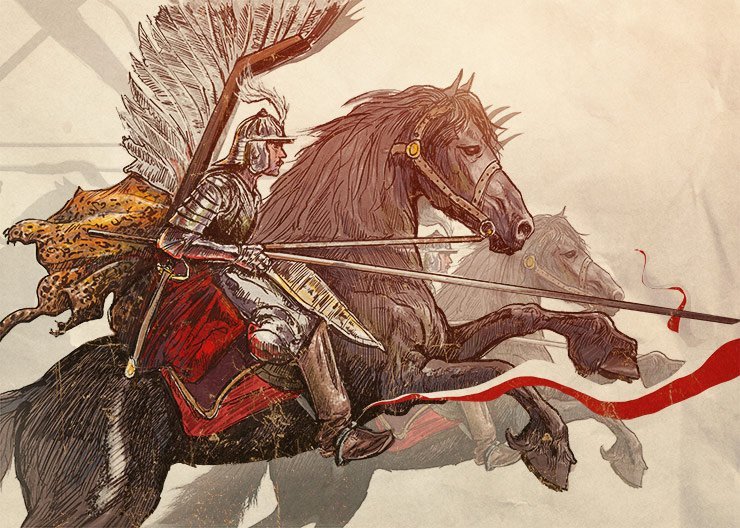 Contemporary spectators of the late 16th century wholeheartedly agreed that they had never seen such fine cavalry before, nor could they compare such splendour to anything else in Europe at the time. On magnificent parade grounds, the Polish kings displayed the grandeur of their hussars. Clad in highly decorated karacena armour, with saddles and reins embroidered in gold and precious stones, they rode the finest breeds of horses. Donning costumes made of the skins of tigers, leopards and wolves, they held long lances with large colourful pennants at the tips, and to top it all off, an awe-inspiring pair of wings that arched from the end of their saddles over their heads, fluttered proudly in the wind. It is no wonder that so many romantic tales and an array of both true and fictitious legends had been spread around the courts of Europe about these men.

The character of the Polish Winged Hussars was in fact a complex hybrid of western and eastern culture, coming from the Polish-Lithuanian Commonwealth – geographically the largest country at the time in Europe. Originating in the heavily armoured knights of the region in medieval times, they incorporated military influences from Russia, the Byzantine Empire and the Mongol cavalry initially, and later from the Balkans and the Ottoman Empire. The influence from Serbian and Hungarian refugees, settling there in the wake of the expanding Ottoman Empire, began strongly influencing Polish cavalry in the 16th century. Polish noblemen began creating the new ‘heavy hussar’, who was equipped with mail shirts, large helmets, the typical Balkan shields and long lances. The Transylvanian king, Stefan Batory, further standardised the hussars, ordering them to drop the shield in favour of a thick breastplate. The new heavy hussars indeed became units with which to be reckoned. On the battlefield against the Habsburgs, Moldovans, Muscovites and Swedes, Polish hussars achieved great triumphs over their enemies.

The end of the Polish Winged Hussars?

However, by the 17th century, the Winged Hussars seemed to be more of a product of a bygone era. Most European nations began abandoning the heavy lancers in favour of pike and firearm formations, and a mix of various cavalry units. The experiences of the 30 Years War showed that a new era of massed firepower, like the Swedish Brigades of Gustavus Adolphus, easily countered the direct charge of the lancers. Was this the end of the Polish Winged Hussars? The Polish-Lithuanian Commonwealth faced crisis after crisis, fighting invasions from the east, from Tartars and Ukrainian Cossacks, who destroyed many Polish regiments. It seemed like the Winged Hussars were doomed to the dustbin of history. Crown Hetman and later King Jan III Sobieski, however, thought differently. In the face of the re-emerging threat of the Ottoman Empire’s expansion from the Balkans into the heart of Europe, new hussar regiments were to be raised, reviving the spirit of the Winged Hussars once more. Sobieski called upon all the ‘worthy sons’ of Poland, urging patriotic nobles to voluntarily fight against the Ottoman menace and raise their own troops.

The state, in fact, contributed very little in reality, and the noblemen and local leaders had to cover most of the expenses themselves. It was advertised as a ‘career investment’ though. They provided horses, armour and weapons, and they would serve their king in campaign, and in turn, were supposed to recover their investment with war booty and lucrative state offices granted by the monarchy. The men accepted into hussars would make a contract, whereby it would take them up to two and a half years to pay off their arms and weapons, and if they survived that long, they would earn themselves money and prestige. It was a complex, flawed system, but for the time, it worked.

The typical hussars wore large protective helmets, often embellished with ostrich feathers. They were equipped with Hungarian style sabres or Polish straight swords, and were protected by a lobster-style breastplate engraved with religious imagery. Now, everyone is of course more interested in the history of the wings. Historians still argue about the exact use of the wings though. By the 17th century, they were usually mounted on the back of the saddle, but the argument is whether they were actually worn in battle or were just for show, like the embroidered saddles and decorated swords, or the expensive bows which were in turn exchanged for wheel lock pistols when on campaign.

Today, we are missing contemporary battle accounts in that regard, but historians in favour of the battlefield theory emphasise that the wings were carried like the leopard skins into battle, to frighten not just the enemy, but also their horses, which were easily affected by unusual sights. They would come down on their enemies like predatory pegasi.

The most important symbol

The most important symbol of the Polish Hussar in the field, however, was the lance. Spanning over 16 feet, the Polish lance was clearly a one-use weapon. It was made of light wood, usually pine or fir, and was hollowed in parts to make it even lighter. This was fitting for the hussar style of fighting. It was often said that the hussars were only good for one day of fighting, but that one day would be the decisive one.

In July, the Ottoman Army had once again marched northwards, threatening the Habsburg realms and the city of Vienna. An estimated 170,000 Ottoman troops lay siege to Vienna, easily outnumbering the mere 16,000 regular defenders. But despite the clear disparity of forces, the Viennese defenders held out, defying the Ottoman guns for weeks. The heroic stand, however, could not last forever, as food supplies and the strength of the defending soldiers and citizens began to run out. 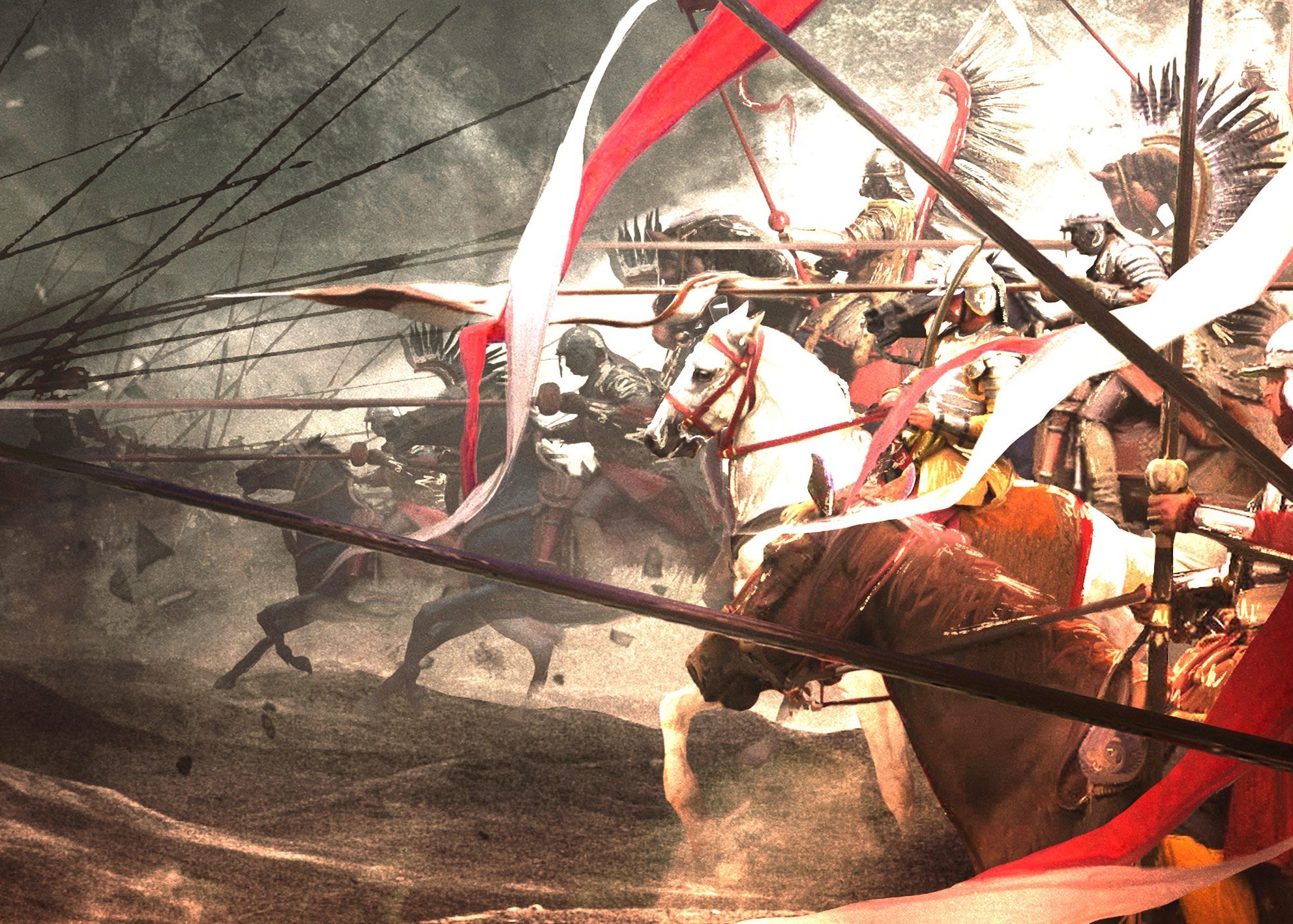 On September 6, Sobieski crossed the Danube northwest of Vienna, with a 20,000-strong force. He would honour his promise to the Holy League to fight the Ottoman menace once more. At the same time, a large Holy Roman imperial force under Charles of Lorraine was marching south as well. They would unite their forces under the command of the Polish King, and among his men marched the Polish winged hussars.

By this time, Ottoman sappers came dangerously close to opening up a breach for the Ottoman troops to take the city by storm. Digging tunnels beneath the walls and filling them with explosives was quite literally a burning fuse under the city. The Ottomans would eventually be successful, despite the valiant resistance of Vienna’s inhabitants, and it seemed their fate was already decided.

But then, the Winged Hussars arrived.

On September 12, King Jan Sobieski and his Winged Hussars came to the relief of the besieged city. The battle had begun the day before, and the troops of Charles of Lorraine were already punching hard into the Ottoman lines. The Ottomans launched several counterattacks, though, preventing the Imperials from breaking through. Ottoman sappers were hastily filling new tunnels with explosives, trying to blow the walls, but at the last minute, these were found and destroyed by the Viennese defenders.

The next day, as the Polish infantry joined the Imperials, the Winged Hussars moved through the cover of the woods, approaching the main Turkish redoubt. Preparing for the decisive strike, the deeply catholic Hussars held a Holy Mass, steeled themselves with prayer and their traditional battle hymn, Bogurodzica – Mother of God.

By 16:00, together with a group of Imperial horsemen, the Polish cavalry stormed down the hill. In all, they were 18,000-strong, probably the largest cavalry charge in European history. Sobieski personally led the attack at the head of his Winged Hussars. At about 100 paces, the real charge began. At 50 paces their horses were driven to full gallop as the Winged Hussars lowered their lances and smashed into the terrified defenders.

Lances splintered, horses trampled men beneath them, soldiers were crushed and thrown aside. The sight of the impaled before them terrified the men in rearward units and their morale crumbled. Most of the Ottoman troops were not protected by plate armour and their formations broke apart. Some Winged Hussars dropped their broken lances and reached for the swords and sabres that hung from knots at their wrists. Others took up war hammers or pistols as they drove through the disordered enemy to safety. They regrouped for another charge, wave after wave into the Ottoman troops, as more troops of the Holy League joined the battle.

Wespazjan Kochowski in his Song of Vienna liberated (1648) describes it so: “No sooner does a hussar lower his lance than a Turk is impaled on its spike, which not only disorders, but terrifies the foe. That blow which cannot be defended against or deflected. Oft transfixing two persons at a time, other flee in eager haste from such sight, like flies in a frenzy.”

Famous for a great victory

After their decisive victory in the Battle of Vienna, the fame of the Polish Hussars grew once more through Europe. The Holy Roman Emperor personally invited them to his court for a demonstration of their skills, and the Russian Tsar raised his own 1,000-strong Hussar army under a Polish renegade. Vienna however, despite being one of the greatest victories, would also be one of the last victories the hussars achieved. Soon afterward, the Commonwealth, under pressure both from foreign powers and from within, started coming apart.

The huge costs of defensive wars contributed to a general financial decline. There were rebellions, and it was hard to really afford the expensive hussars anymore. Nonetheless, the Winged Hussars managed to survive well into the 18th century, and would be deployed in the Great Northern War, but their decisive role on the battlefield was behind them. Their imagery, however, survived, and especially in the 19th century, began to re-emerge as a symbol of Polish pride and identity – remembering them from a time when indeed, no finer cavalry than the Polish Winged Hussars roamed the battlefields of Europe.

The story of The Battle of Vienna heavily inspired our song ‘ Winged Hussars ‘, which is featured on our album, ‘The Last Stand’. Take a look at the lyrics we wrote here.

If you’re interested in a more visual interpretation of the above story, watch our Sabaton History episode, Winged Hussars – Polish Cavalry: