The battle of Wizna refers to a battle fought in the initial stages of the invasion of Poland. Taking place from September 7th to September 10th 1939, the fight marks the heroic stand of the Polish army against overwhelming odds. Led by Captain Władysłav Raginis, the Polish soldiers – numbering between 350 and 720 men – held the Wehrmacht – numbering over 40 000 soldiers – for three days. Inspired by this event SABATON paid tribute to the bravery of the soldiers with the song “40:1” from “The Art Of War”.

Contrary to the popular opinion, the German invasion of Poland came by no means as a surprise. Alarmed by the German annexation of Austria and the Sudetenland in 1938, the Polish government began reinforcing its defense lines in early 1939. As part of this preparation program a fortified system of bunkers was installed on a length of nine kilometers, stretching between the villages of Kołodzieje and Grądy-Woniecko with Wizna at its center. Located on the elevated banks of the Nareva and Biebrza river, the strategically favorable position allowed the Polish soldiers to overlook not only the swampy marches of the river crossing, but also the important supply roads on the rear of them. 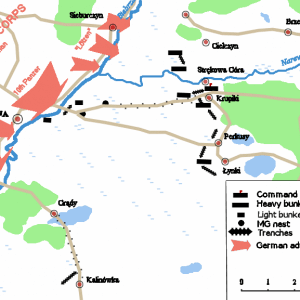 Positions prior to the battle of Wizna

As WW2 broke out on September 1st, however, the fortified defense line at Wizna was far from being finished. Only 16 out of 60 planned bunkers were built, with only six of them being equipped with anti-tank artillery and walls constructed from heavy concrete able to withstand the German artillery fire. Taking command on September 2nd, Captain Raginis ordered the reinforcement of the structures with hastily dug-up trenches, barbed wire, landmines and anti-tank obstacles. Nonetheless, with Wizna being located only 34 kilometers from the East Prussian border, the approach of the Wehrmacht was almost impossible to fend off.

Trying to close in on Warsaw from the north, the 10th German Panzerdivison under the command of General Nikolaus von Falkenhorst took the village of Wizna on September 7th. Forced to retreat by heavy artillery, fire the Polish soldiers retreated across the river to the safety of their defense line, not before blowing up the bridges behind them. The approach of the German infantry forces after dark had to be undertaken by foot, making it possible for the Polish defenders to repel it by heavy gunfire. Suffering casualties, the Wehrmacht was brought to a halt and forced to wait for reinforcement.

On the morning of September 9th, the XIX Panzer corps led by Heinz Guderian joined the troops of von Falkenhorst, increasing the numbers up to an overall of over 42 000 German soldiers. With this, the Polish were outnumbered 60:1. As the Wehrmacht dropped propaganda pamphlets over the bunkers – telling them that Poland was already under German control and further resistance was foolish – Captain Raginis swore an oath, that the battle would continue as long as he was alive. Although lacking proper anti-tank weapons, the Polish forces were able to keep the Germans in check with machine gun fire. The battle of Wizna has become a bizarre stalemate.

However, at 6 pm the Polish soldiers were forced to leave the trenches and retreat to the bunkers. Hence, nothing stood in the way of the German tanks which breached the defense line and isolated the bunkers from each others in the early evening. The skirmishes lasted until the next day, as Raginis soldiers were not willing to give up. However, as ammunition ran low in the morning of September 10th, surrender was inevitable. With only two bunkers left intact, Raginis ordered his troops to cease fire and to turn their weapons down. True to his word, Raginis committed suicide by throwing himself on a grenade, before German soldiers were able to arrest him. 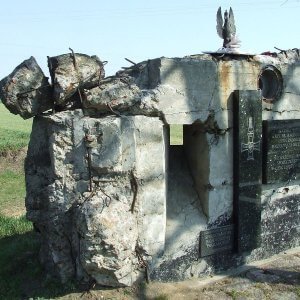 Memorial site at the ruin of one of the bunkers

Until this day the battle of Wizna is a defining component of the commemorative culture of Poland. Since first-hand sources about the battle are scarce, the exact number of casualties are unknown. Some German sources don’t even mention the engagement. Nonetheless, the bravery of the Polish soldiers and Captain Raginis is echoing through time. It is not surprising, that the Battle of Wizna is often referred to as the Polish Thermopylae. Inspired by the Spartan legend the inscription at the battle memorial reads the following: “Passerby, tell the Homeland that we fought to the end, fulfilling our duty”. Or to put it in the words of SABATON: “No vermin may enter that land, that is protected by Polish hand”!