The military disaster for Sweden that was The Battle of Poltava on June 28, 1709, was a crippling wound that put Sweden’s future in jeopardy. The Swedish King, Charles (or Karl) XII, had barely escaped being captured by the victorious Russians, and was now having his wounds treated as a guest of the Ottoman Empire at the city of Bender, in what is now Moldova. Although he was safe among The Ottomans, Russia’s great enemy, he was now also over 700 miles away from his realm – halfway across Europe. That, in itself, was maybe more damaging to the Swedish Empire than any Poltava could have been.

With the absence of their ruler, the Riksdag – the Swedish parliament in Stockholm – was in a precarious situation. The destruction of the Swedish army at Poltava had encouraged the old enemies of Sweden to renew hostilities. Not only the Russians, but Saxony and Denmark had also set their sights on the now struggling Swedish Baltic Empire. The Riksdag did its best to negotiate some sort of peace agreement with its enemies to buy time for the King’s return. Karl, however, forbade any further peace negotiations and was taking his time to return. He believed that he had once brought the empire glory and prestige, and he would do so once again in the future.

Without a peace deal, Riga and Dünamünde were soon lost, as were Reval and other Swedish possessions and fortresses in the Baltic states. In November 1709, an army of 16,000 Danes crossed Öresund to attack Sweden. Sweden fortunately had the highly capable Governor General of Skåne, Magnus Stenbock, on its side, who not only put together an army of mostly young recruits for the defence of the Swedish homeland, but also used that army to counterattack and drive the Danes out of Sweden.

But this could not go on forever. Many felt that Sweden needed a strong statesman, a level-headed sovereign, who could assess the nation’s real strength and the limits of its power. But it was still an absolute monarchy by constitution, and whatever the Riksdag decided, their decisions could still be overruled weeks or months later, as King Karl’s orders finally arrived from his self-proclaimed exile.

The situation was indeed dire. Sweden was bleeding dry. Its economy, which was still mostly agrarian, was in shambles. The people were starving, carrying the burden of a besieged empire on their overtaxed backs. Famine and bankruptcy crippled the realm. Soldiers could not be raised because there was no equipment for them; ships could not be repaired; cannons could not be cast. There were mortgages on towns and estates, and even the church bells had to be sold just to keep the Swedish state and its defences alive.

Stenbock’s victory allowed them some breathing room, though, and there was even a chance of a neutrality pact backed by the Holy Roman Emperor, who wanted to prevent the war from spreading into his realms. The Riksdag supported the idea, but Karl would hear nothing of it. In fact, he hated the idea of a neutrality pact, thinking that this would ultimately tie his hands and keep him from reconquering the lands that were rightfully his. Sweden’s future, he believed, was destined for greatness, and Karl would not be the King under whoever’s rule the Baltic Empire fell to. Putting his trust in God and the righteousness of his cause, the King tore the neutrality pact apart and made it perfectly clear to the Riksdag that the authority of the empire and its armies lay with him and him alone. He still aimed to save everything, to renew the offensive against Russia and Sweden’s other enemies. There would be peace eventually, but a peace that was honourable for Sweden.

Even the hardcore loyalists in the Riksdag wrote heartfelt letters to their sovereign explaining the impossibility of his demands and that the age of conquering and triumphs was over. Sweden had to come to terms with her enemies, even it meant giving up territory, or there may well come a day when there was no realm for the King to come home to anymore. Stenbock even went to Bender himself to plead with the King in person, but it was useless.

Historians agree that up until 1712, Sweden still had a few chances left to save parts of the realm through clever diplomacy. There was an offer by the Prussian King Frederick I for Karl to lead a combined army from Prussia, Sweden and Saxony against the Russians, but even that offer was refused by Karl, not wanting to be a puppet for others. The Swedish King was deeply disillusioned by decades of broken promises and betrayals by the other great powers. Instead, he clung to a belief in his personal destiny, and a God-given mission that was his from birth. However, in an age of ruthless ‘Staatsraison’ – putting the security of the state, whatever the form of government, first by any means necessary, that was a tragedy in itself.

In 1713, Magnus Stenbock and 11,000 men were forced to capitulate to an overwhelming force of a Russian-Danish-Saxon coalition. Sweden had now lost all influence in the courts of Europe. A fatalistic mood swept over the Riksdag as the continental positions were basically lost, and at this point even they were pretty much ready to revolt against Karl and the absolutist constitution if it meant saving Sweden from disaster. Liberal statesmen like Arvid Horn stepped in, pleading for a parliamentary future, instead of facing the dangers of a revolution, but this liberal future could only begin after Karl was no more.

In the face of this possible revolt, Karl finally came home to Sweden. Despite the burdens he had put on his people, the common folk still praised their beloved King in the hope that now, everything would finally turn out for the better. However, the King had no intentions of remaining in Sweden. Instead, he immediately ordered an army of 20,000 men to be raised and prepared to continue to make war. Talks of peace or neutrality must cease at once. He would take the fight to the enemy, which was by now a coalition of Denmark, Russia, Prussia, Poland, Saxony and Hannover. With his typical confidence, unshakable belief in God and a little money from the French, Karl set out to save Sweden with a demonstration of power, but one that it could hardly afford.

Great triumphs were not easily found, and instead, there were just more years of fruitless campaigning. In late 1718, Karl and his troops marched towards Danish strongholds in southern Norway. It was already past October and his troops suffered from the harsh weather and the hardships of the journey. Hundreds were dying of disease, as the siege of the fortress of Fredriksten at Fredrikshald began. 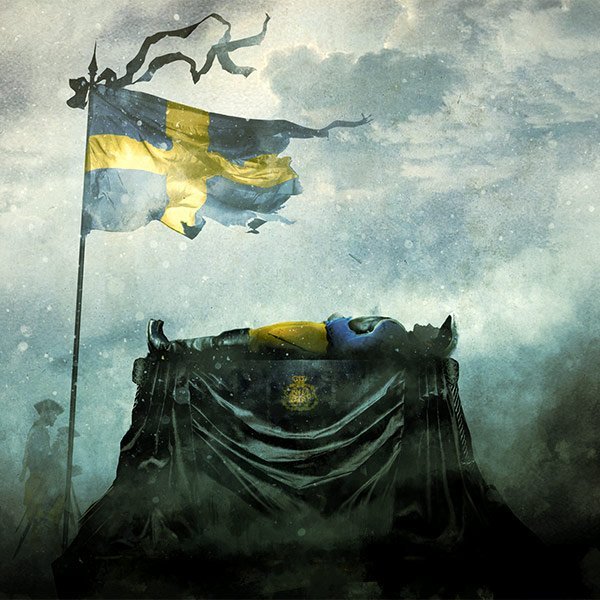 The King himself did not shy away from danger, though, and shared the burden of his troops. He slept in the field with them, kept watch in the trenches, and even led his troops into the breach of the outer walls. By November 30, the Swedish trenches had been dug up to the final bastion of the fortress, and just a musket shot away, the King and his officers inspected the battlefield by night.

The Danish defenders constantly lit up the night, trying to pick off sappers. Again and again, Karl was seen climbing the trenches to look over the edge for any sight of activity inside the bastion, to the dismay of his concerned officers. “Musket balls and cannon-balls have little respect for a King,” one of them said, as the King put his head over the top once more.

Suddenly a thud was heard, as if a stone was hitting the earth. The King’s head sunk down on his chest. “Lord Jesus! The King is shot!” the officers cried out from the trenches. A piece of metal had pierced Karl’s left temple, punching through his head and coming out the other side. The King was dead in an instant at 36 years of age, and his reign of 21 years came to an end.

With the King’s death, the constant state of war finally came to an end. The King’s body was brought back to Sweden – a nation that had suffered dearly because of war – and was buried at Riddarholmen Church. Following his passing, the dreams of the great Swedish Empire vanished, but peace finally returned to the Swedish people.

Who or what had killed the King that day is still a mystery. Some suspected a canister shot from the fortress walls; others presumed a musket shot; some said he was shot on purpose by one of his own by mistake or treachery.

There was an investigation, and several liberal politicians were even tried and executed, but hard evidence for an assassination has never been discovered. To this day, over 300 years later, the mystery remains. The mummified body of Karl XII has been exhumed and analysed three times since his death, the third time was in 1917.

King Karl XII’s story heavily inspired our song ‘ Long Live the King ‘, which is featured on our album, Carolus Rex. Take a look at the lyrics we wrote here.

If you’re interested in a more visual interpretation of the above story, watch our Sabaton History episode, Long Live the King – Swedish King Karl XII: