By late December 1914, there was no end in sight to the Great War. Morale plummeted, as the soldiers realised that they would spend winter in the miserable trenches.

Winston Churchill wrote to his wife in mid-December: “What would happen I wonder, if the armies suddenly and simultaneously went on strike and said some other method must be found for settling their dispute?” He would soon find out.

The professional armies of career soldiers who had fought each other over the summer were largely gone by now – they were either dead, wounded or prisoners. In their stead stood conscripted men and disillusioned wartime volunteers, trapped in the horrors of trench warfare. Both sides spent their days sharing their meagre rations with rats, fleas and lice. They slept in damp underground dugouts and caves while the forward sentries tried to keep awake in the mud and sleet. The whole trench system was still seen as temporary, though, and breakthrough would come soon, so it lacked any kind of comfort or sophistication. And beyond the parapets?

On December 21, British Colonel Swinton wrote: “This is the Ultima Thule, beyond is neutral territory, the no-man’s land between the hostile forces. It is strewn with the dead of both sides, some lying, others caught or propped on the sagging wire, where they may have been for days, still others half buried in craters or destroyed parapets.”

When winter began and the temperature dropped, an increased lethargy was noticed by officers on both sides. Soldiers were literally sick of the worsening conditions, of being constantly exposed to the cold, the rain and the enemy guns. The aggressive policies put in place by High Command to keep the infantry busy only made things worse. Patrolling through the nights, keeping watch over the parapets, throwing bombs and sniping at the enemy – it all seemed so futile. All it did was increase their own chances of getting killed.

This led to a number of unofficial truces all over the front – a ‘live and let live’ system.

‘You let me sleep, I let you sleep. You don’t fire on our latrines, we won’t shoot up yours.’ Sometimes grenades were intentionally thrown to the side, or codewords were exchanged signaling a coming bombardment. It was a basic, almost natural understanding that there were limits to war. The Champagne Offensive began the week before Christmas. After a series of attacks and counterattacks, no-man’s land was littered once more with the bodies of the fallen. The overall mood inside the trenches was as terrible as the weather, with men up to their knees in mud and water. Then the first incidents happened. German soldiers were heard asking about a ceasefire. Hands in the air they indicated that they wanted to go out and take care of the wounded in no-man’s land, and bury the decaying bodies. The British agreed, and went out to do the same. It was all spontaneous, but suddenly men were passing each other over the battlefield without firing a shot. In some cases, they even had a quick chat or shared a cigarette.

People sometimes overestimate the size of no-man’s land but the trenches were usually 200m apart, often less than half that. The forward saps were even closer. Day and night, the men could hear each other talking, or yelling and singing. Conversations between the two sides were not uncommon. When a German soldier was seen carrying a wounded British trooper on his back to the line, he was thanked and granted a safe passage back.

Christmas Eve morning, the Christmas gifts arrived. Chocolate and sweets, cigarettes and tobacco, and hundreds of thousands of small packages and letters from home. This raised morale tremendously but also magnified the feelings of homesickness and the desire for peace and a return to normal life. Men began shouting and teasing each other. “Fritz! Tommy! Come across – we meet halfway.” But they were hesitant. A few brave souls went out at their own risk. The are different stories, but over the course of the day there were even incidents of British and German officers talking about a possible ceasefire on Christmas Day.

By evening, soldiers lit candles on the trenches, some even set up small Christmas trees. The men sang the all-time classics in English or German, like Stille Nacht, The First Noel and O Come All Ye Faithful. For most devout Christians, Christmas was the most important day of the year. The celebration of the birth of Christ stood in many ways in stark contrast to the reality of the war itself. Around midnight everything went eerily quiet.

On Christmas morning, as the fog disappeared, the stillness remained. Instead of the cracking of rifles, men heard the chirping of birds. Everyone in the sector wondered what would happen next.

Soldiers once more began talking to each other. Boxes of food and souvenirs were thrown across to the other side. A few men exposed themselves above the parapets, then more followed. A basic agreement was made: No one would fire unless fired upon. In some places, where the ceasefire had indeed been arranged beforehand, further rules were set in place. First of all, if either side fired a shot with the intent to kill, the truce was immediately off. Action by artillery did not count nor did it break the truce, as they had no control over the batteries far to the rear of the trenches. If an order was given to open fire, they would shoot the first three rounds into the air, to give the other side time to get in cover. If there were orders to expand a certain amount of ammunition this day, the machine gunners would waste ammo in the evening hours, after a shrill warning signal. Neither side was allowed to erect barbed wire or repair their trenches during the truce.

Still, everything was based on trust and an unwritten code of honor. A machine gun could cut them all down within seconds, yet no one shot. Men venturing out did not even carry arms, some waved a white flag, and the men – mortal enemies just a day before – met and shook hands, talked and exchanged gifts.

For a few hours, it was peace. There were of course some officers who went straight to HQ to report on this, and plenty of men who did not take part, but overall, the mood was far from being hostile. It was this weird realisation that the other side was just as human as their own.

A game of football

The most iconic moment of the truce was a football match in no-man’s land. It was as spontaneous as everything else that day and the stories all vary.

“A ball appeared from somewhere, I don’t know where , but it came from their side… They made up some goals and one fellow went in goal and then it was just a general kickabout. I should think there were a couple of hundred taking part. I had a go at the ball. Everybody seemed to be enjoying themselves. There was no sort of ill-will between us… There was no referee, no score, no tally at all.” – Private Wiliams of the Cheshire Regiment.

“A couple of English brought a football out of their trench and a vigorous football match began. This was all so marvelous and strange. The English officers thought so too. Towards the evening, the officers asked whether a big football match could be held the following day, between the two positions.” – Saxon Leutenant Zehmisch

“No man’s land had seemed ten miles across when we were crawling out on a night patrol; but now we found it no wider than the width of two football pitches. We provided the football, and set up stretchers as goal posts; and the Rev Jolly, our padre, acted as ref. They beat us 3-2.” – Robert Graves, Royal Welch Fusiliers.

As darkness began to fall, the men shook hands and went back to their trenches. 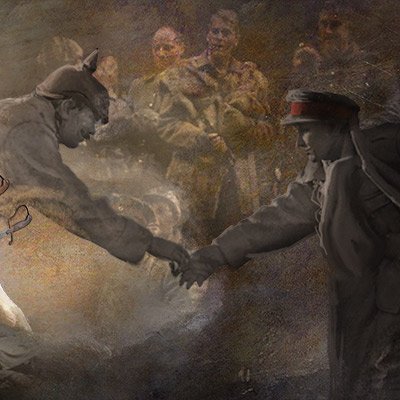 The Christmas Truce was a unique and rare moment in history. It was both spontaneous, and to a certain degree, foreseeable. Of course this didn’t happen everywhere. Hundreds of men still died, and parts of the front were as busy as every other day. The Western Front was just one of many battlefronts in the war – on Christmas Day, Ottoman soldiers by the tens of thousands were busy freezing to death in the disastrous Battle of Sarikamis in Eastern Anatolia.

But for those that experienced the Truce, it was something they’d never forget. In some places it lasted a few hours, and in others, it lasted to the next day, but it couldn’t go on forever. As the news went up the chain of command, generals on both sides were quick to snuff it out. Fraternisation was deemed a crime against the nation. Participating units were rotated out the lines, and their officers were threatened with court martial. High command ordered inspections and speeches, and shamed the men at the front. ’Did you shake hands with those that bayoneted babies in Belgium? Did you exchange gifts with the bastards that killed your brother yesterday?’

Although the press back at home was quick to take up the story, censorship soon cracked down on its telling. The whole truce became taboo. Official history denied that it ever happened. It only lived on through the memories of those that had participated, and who had shared the stories with those back home.

As the war went on, the animosity between sides became ever greater. Poison gas, flamethrowers, the sinking of merchant ships, the slaughter at the Somme and Verdun, all made sure that the Christmas Truce in the west would not repeat itself. Of course, there would be smaller truces all over the war on all fronts for such things as retrieving bodies. Informal arrangements were respected, but this level of fraternisation, this antithesis to war, would never again be reached. Not until the end.

Still, Churchill got his answer:
“For a single day, the opposing forces mingled in friendly conversation and even in games. It was an amazing spectacle, and must arouse bitter thoughts concerning those high-ranking conspirators against the peace of the world, who in their mad ambition had hounded such men on to take each other by the throat rather than by the hand.” – Arthur Conan Doyle, 1916.

The story of the unofficial ceasefires on the Western Front in December 1914 heavily inspired our song ‘ Christmas Truce ‘. Take a look at the lyrics we wrote here.

If you’re interested in a more visual interpretation of this story, watch our Sabaton History episode, Christmas Truce – December 1914: