Before the modern era, the large mountain ranges of Europe were mostly irrelevant to the grand strategies of military planners. Power lay in controlling the valleys and passes, and no one thought of fighting on or even setting foot on the high mountain peaks themselves. It was not until the emergence of clearly defined nation states and geopolitics in the 19th-century that this began to change. Mountain ranges like the Alps, Vosges and Pyrenees were now good natural barriers that safeguarded the plains of the “heartland” and were fortified accordingly.

Two nations that found themselves at each other’s throats over such a mountainous barrier, were Italy – whose reunification was completed only in 1871 – and the Austro-Hungarian Empire. Although formally bound by the Triple Alliance and the border set in 1866, nationalists on both sides complained about the “iniquitous frontier”. The Italian “Irredenta” movement wanted to fix the “real” frontier by marching into southern Tyrol, taking Triento and occupying the mountain passes up to the Brenner Pass, and when Italy declared war on Austria-Hungary on May 23, 1915, joining the Great War, the major goal was to achieve exactly that.

Although the Italian Fourth Army was quick to seize the Falzarego Pass, they found the way into Valparola blocked off. From the peak of the Col di Lana, which stood 2,462m high, and the surrounding mountains, the Austrian defenders denied any further advance. A costly campaign followed for the possession of Col di Lana, which would soon bear a new, more fitting name: Col di Sangue – Blood Mountain. 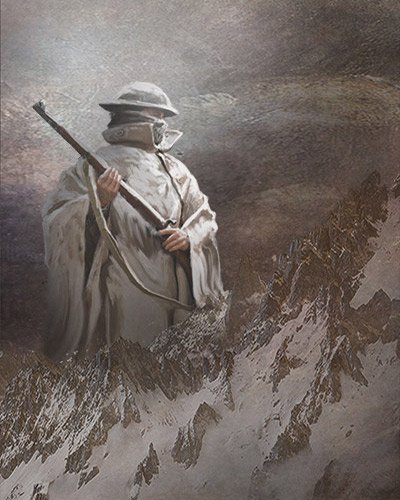 The violent struggle for the Col di Lana would be mirrored all over the Alps and Dolomites. Like a huge “S”, the front ran from the Swiss frontier to the Adriatic Sea. From the Trentino and the Alpine Fronts down to the Isonzo Front, the area is almost continuously mountainous in nature. The average altitude was about 3,000ft/915m above sea level, but many peaks rise above 6,000ft/1,850m, some even over 9,000ft/2,750m.

Both sides were well aware that being able to fight in such conditions would only be possible through great feats of ingenuity and hard labour. Miles upon miles of trenches and dugouts were blasted or cut into the rock, guarded by rows of barbed wire. On peaks where perhaps no man had set foot before, they set up machine-gun blockhouses and artillery positions. Hundreds of miles of roads and paths were constructed, slithering up the slopes in a serpentine manner from the lowlands. Heavy guns and mortars were hosted with an elaborate system of wires and pulleys of the “teleferica” lifts, while porters and mules carried ammunition and supplies up to the camps.

The objective was to always occupy higher ground than the enemy, even if only marginally so, and to use that as an observation point, while also spraying machine gun bullets on enemy positions below. Peaks and cliffs could be held by just a handful of men, while the enemy exhausted itself struggling and shuffling up the narrow passes. Many mountainsides were just a wilderness of stones that were as sharp as knives, tearing even the most heavy duty boots.

The Alpini and the Kaiserjäger

On the Italian side, it fell to the Alpini to attack enemy strongholds. Almost exclusively recruited from the Alpine regions, the Alpini was an elite formation which proudly wore distinctive feathered headgear. Often clad in white from head to toe, they edged their way down narrow slopes on a single rope or grappled their way up perpendicular cliffs. On the other side were Austria’s Kaiserjäger, equally expertly trained in climbing techniques and skiing. Born and raised in the mountainous communities, they were sharpshooters and were skilled in surviving the harsh conditions.

The attacking side usually waited for dense cloud to fill the valleys, to hide them from the ever-watchful observers among the rocks. To further mask an approach, artillery would open up to suppress the defenders. The already deadly effect of grenades and shells bursting against the rock was multiplied as the blasts broke off jagged rock-fragments and splinters, causing them to ricochet lethally, and head and eye wounds were far more common on the Alpine than other fronts. Blast pressure was enough to dislodge whole patrols from mountain paths or throw someone off a ledge. Most feared of all were the avalanches of snow and rock that could be triggered by explosions and swallow whole battalions of men at once.

So, while the enemy would take cover from the shelling, assault parties would scale the mountain. Once near the top, there was nowhere to go but forward. Once alerted to their presence, the enemy would try to shoot them down or cut their ropes. With grenades and guns they aimed at blasting them off the mountainside, and stones falling from above were as deadly as any bullet.

On the roof of the world

Living and fighting in positions on the roof of the world, thousands of feet high, demanded a physical and mental fitness unknown to most. 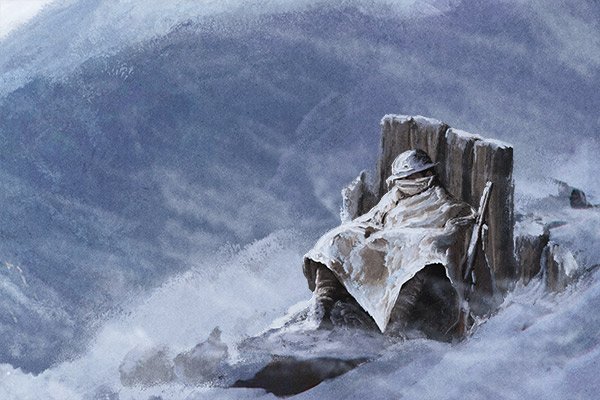 Just one slip or one misstep could lead to certain death by plunging into the abyss. Men without adequate knowledge, patience or skills in snowcraft, those who did not inherit the instincts of their fathers, would quickly perish fighting over snowbound gullies and along narrow ledges. This constant exposure to danger and loneliness brought a rather fatalistic outlook with it. High up in the mountains, the tales and beliefs of their ancestors still prevailed. The lore of miraculous images, fairies and hobgoblins was mixed with a strong Catholicism. The unshakable belief that Jesus and the saints were watching over them was expressed in the numerous chapels and wayside-crosses set up throughout the mountains. The fatalism is understandable, as the mountains were inhospitable terrain. Dry as a desert in the summer and frozen solid in the winter. The men stationed up there needed food, housing, and above all, water and tough clothing because the fighting didn’t stop over the winter months.

In the most extreme altitudes of up to 11,500 ft/3,500m, temperatures regularly fell to below -30 C. Heavy snowfall and blizzards could come as early as September. Men clad themselves in a wide variety of warm clothing. They wore thick fur hats, duffle-coats with cuffs and fur collars, mitts and strong boots up to the knee. Patrols were only possible with skis or snowshoes. Sentries smeared their faces with grease to protect themselves from the stinging blasts of the icy winds.

In the Carnic Alps, which are mostly covered in snow all year long, places became known as the “city of ice” or “city of eternal snow”. Whole camps were set up in icy caverns, and guns were dragged through tunnels cut through the drifts. Soldiers spent days and nights wrapped in shaggy furs, in holes not unlike igloos. The highest positions were often cut off from supplies for weeks, perhaps even months, by weather or enemy action. To supply those men with adequate clothing, a whole nation was mobilised. Hundreds of thousands of women toiled daily sewing undershirts, woolen scarfs, cloaks, and anything that protected against the cold and dampness of the winter winds. To not just survive but also to work and fight throughout the winter, rations had to be increased to anything between 3,900 to 4,700 calories a day. Food was kept warm wrapped in paper that was coated in wax or solidified spirit. Small stoves ran day and night on animal fat, and men put heated bricks inside their sleeping bags to preserve body heat.

Fighting on the Col di Lana was heavy during the harsh winter of 1915/16.

In the autumn, the Italian Fourth Army had gathered 12 Infantry and 14 Alpini battalions, but they were still unable to conquer the mountain. On November 8, they came close, pushing the Austrians off the peaks, but their casualties had been too heavy. A counterattack from the nearby Mount Sief again forced the Italians to surrender possession of Col di Lana. Despite the heavy snowfall, they tried another push in December, and successfully occupied new positions, but the peak still eluded them.

Italian pioneer officer Don Gelasio Caetani came up with a plan. They would undermine the Col di Lana and dislodge the Austrians with a gigantic explosion. The plan was to be executed in total secrecy. No drilling machines would be used, only manual ones, or chisels and mallets. From December to March, they tunnelled beneath the mountain. But despite the secrecy, by spring the Austrians suspected that something was up, so they started counter-mining the Italians. From the top down, they used explosive cartridges, drills and crowbars to try to find and destroy the enemy mine. But they were too late.

By April 16, 1916, the Italian blast tunnel was ready. Spanning a total length of 105m, the two main rooms were filled with 5,000kg of Nitro-Gelatine and sealed with sandbags. Everything was being prepared for one decisive attack. All day long, they bombarded the mountain with every gun they had, while the assault companies moved into position. At 23:30 on April 17, the mine was detonated. The mountain literally shook as its top was blown in two. 10,000 tons of rocks and debris were shot into the air. Around 200 Austrian soldiers were killed in the explosion and the following assault, many of them horribly battered and mutilated by the flying debris. After the Italians took the remaining defenders captive, positions were secured to hold the mountain once and for all.

With the Col di Lana now secured, they thought the road into the Trentino was finally open. Yet they were to be disappointed. To the north and west, the other mountains were still occupied, and Monte Sief was as heavily defended as Col di Lana. The mountain and mining war would continue.

For three harsh winters in the Great War, the men fought, lived and died on those mountain ranges, on the roof of the world, where Col di Lana became, in reality, just one of many Blood Mountains.

The battle for the Col Di Lana summit and mountain warfare in WWI heavily inspired our song ‘ Soldier of Heaven ‘, which is featured on our album The War To End All Wars. Take a look at the lyrics we wrote here.

If you’re interested in a more visual interpretation of the above story, watch our Sabaton History episode, Soldier of Heaven – Mountain Warfare in WW1: