Leonidas I was the most famous king of the city state of Sparta in Ancient Greece, best known for leading 300 of his warriors in a last stand against an overwhelming invading horde of Persians at the Battle of Thermopylae in 480 BC. The event has inspired many works of art and literature – including Sabaton’s song Sparta from 2016’s The Last Stand.

Leonidas was the 17th king of the Agiad line, a ruling family that claimed to be descended directly from the hero Heracles himself. His accession to the throne of Sparta was not straightforward: he was in fact the third son of his father, Anaxandrias II. According to the ancient historian Herodotus, who chronicled the lives of the Greek kings, his father and mother were uncle and niece, and the marriage initially failed to produce any children. King Anaxandrias was advised by his counsellors to put her aside and take another wife, as was common practice at the time for men whose wives were “barren”. The King said the lack of an heir was not his wife’s fault, so it was agreed that he could marry a second woman without casting the first aside. The new wife quickly bore a son, Cleomenes. One year later the first wife would also produce a son, Dorieus, followed by two more: Leonidas and Cleombrotus.

When King Anaxandrias died in 520 BC, his eldest son Cleomenes was chosen as heir. Dorieus, who Herodotus described as the finest young man of his generation, was furious that his half-brother – offspring of his father’s second wife – was preferred over him and left Sparta. He is said to have travelled to Africa and then Sicily, where he was living when he died 10 years later. Ironically, if Dorieus has not left Sparta, he would have become king after Cleomenes, as the king was deposed in 490 BC – reportedly on grounds of insanity – and had no sons to succeed him. The crown passed to Leonidas as the next eldest surviving son of Anaxandrias, when he was around 50 years of age.

It is likely that Leonidas, like his brother Dorieus before him, had studied the “agoge” ­­– the system of compulsory education, combat and hunting training that all young men (except the firstborn of the royal line) underwent in Sparta. As well as his doubly royal blood (his parents were both from the Agiad line), Leonidas would have considered his agoge training an important symbol of his worthiness to be king. Before he succeeded to the throne, Leonidas had married Gorgo, daughter of Cleomenes – marrying his niece like his father did before him. Gorgo is one of only a few women named in Herodotus’ histories and was famed for her wisdom and political astuteness. She bore Leonidas a son and heir, Pleistarchus. 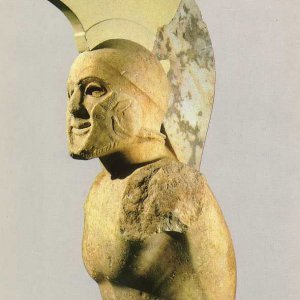 Marble statue of a Spartan soldier, possibly King Leonidas I, in the Archaeological Museum of Sparta

When the second Persian invasion of Greece began in 481 BC, Leonidas was chosen to lead the combined Greek forces, both because of the Spartans’ reputation as a superior military kingdom, and because of his own prowess as a general. It is said that the king visited the Oracle at Delphi, which was consulted about important matters of state throughout Ancient Greece, and the Oracle delivered a grand verse that essentially told him that he must lay down his life to prevent his kingdom from being laid waste by Persia.

In August 480 BC, Leonidas marched out to meet the army of the Persian King Xerxes at Thermopylae, a narrow coastal passage that lay on the Persians’ route inland. He had with him just 300 elite Spartan soldiers and 900 slaves, to which he added as he marched cross-country through other city-states, ending up with a total army of  between 4,000 and 7,000 men. Various explanations have been put forward as to why the force was so small; Herodotus theorised that the Spartans marched straight out so they were seen to show no fear, with the expectation that a larger army would be mustered and would follow soon after, but modern historians believe internal strife or even the fact that the Olympic Games were being held at the time could have been to blame.

The Persian army they faced was vast in number. Herodotus’ estimate of two million men has since been debunked, but the figure was at least 70,000 and possibly up to 300,000. A four-day stalemate followed, then the Persians attacked on the fifth day. For two days, the Greeks held back the Persians, killing approximately 10,000 of their men, including two of King Xerxes’ brothers. On the seventh day, a traitor named Ephialtes contacted the Persian general Hydarnes and showed him a hidden path that he could take to get behind the Greeks. Knowing that he was now outflanked, Leonidas sent away all Greek troops, choosing to remain in the pass with his 300 Spartans and the slaves, 400 Thebans and 700 Thespians.

Herodotus recorded that Leonidas sent the men away to ensure they would live to fight another day and be useful in a future battle against the Persians, and the Spartans stayed both to protect the Greeks’ escape and because they could never abandon their position on the battlefield. The Thespians were supposed to have been sent away with the other Greeks, but stayed behind of their own will.

Xerxes reportedly offered to spare the Spartans’ lives if they gave up their arms, to which Leonidas replied “ΜΟΛΩΝ ΛΑΒΕ” (come and take them). The men then fought a bitter last stand against the Persians, and all were killed except the 400 Thebans, who surrendered to the Persians without a fight. After Leonidas was killed, the Spartans fought to retrieve his body and prevent the Persians from desecrating it. Leonidas was approximately 60 years old at the time of his death, and he was succeeded by his son, Pleistarchus.