Formation of the Chasseurs Ardennais

Despite France and Great Britain declaring war on Nazi Germany in September 1939 following Germany’s invasion of Poland, no real assaults had commenced in the field, even after seven months of inaction.

In April 1940, Germany invaded Denmark and Norway, and London and Paris still did not act. Instead, they waited for the Germans to one day run up against their defensive works, and they gathered their strength. The old guard of generals and politicians assumed this war would be like the last one, and since Germany lacked the economic reserves and the military apparatus to mirror their 1914 advance into Belgian and French territory, this one’s outcome seemed already decided.

But the Germans were well aware that with an enemy force ratio already stacked against them, they would ultimately lose any coming war of attrition. Instead, the German general staff agreed that only a forceful offense would guarantee victory.

Generalleutnant Erich von Manstein and Generalleutnant Heinz Guderian came up with a daring plan, one that no one would expect them or anyone to pull off. To drive a Panzer division through the heavily wooded hills of the Ardennes. This would ultimately split the French forces and crash through them and the Belgians at their weakest spot. German Panzers and motorised units would race to cross the River Meuse and force an operational exploitation through the Ardennes, and even push through the first Belgian fortification lines at Martelange, and further forward between Libramont and Neufchateau.

For Belgian high command, the Ardennes were not a major defensive factor since the area is far in the southeast of the country and beyond the mighty river Meuse. Although there were several Belgian and French officers who spoke out against this defensive negligence, it was still generally agreed that an armoured thrust through the Ardennes was risky. Tanks aren’t able to travel through the forest and must remain on the roads, making them sitting ducks and easy targets.

Instead, the Belgian military formed their defensive plans from their experiences from the Great War. They figured that spreading out their troops along the border would see them overwhelmed by the stronger German advance. Also, the Belgian military endured several budget cuts in the interwar years and was unable to muster a large motorised or armoured force. They planned to concentrate the main mass of the Belgian troops in redoubts in the north-western part of the country, and another force between Liege and Namur, and wait for the Allies to come to their aid. 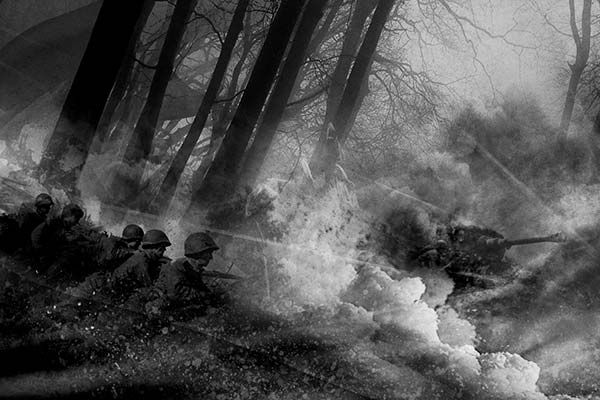 The Ardennes sector would be only lightly defended by the K-Groups under the command of General Maurice Keyarts. Those groups consisted of a specialised screening force, trained to move and fight in the heavily wooded forests: The Belgian Ardennes Light Infantry, Les Chasseurs Ardennais. Their primary mission was to act as a tripwire defence. They were not expected to stand up to the Germans since they were purely infantry without enough firepower to effectively stop armour. They were instead tasked to trigger demolition charges on bridges and traffic routes. Upon receiving the order to withdraw, the Ardennes Light Infantry would disengage from the enemy and fall back to the main Belgian forces in the northwest of the country.

For the Belgians to preserve as many of their units as possible until the Allied reinforcements arrived made sense, when looking back at Germany’s 1914 Schlieffen Plan, but now they played right into von Manstein’s plan.

That plan was scheduled down to the minute. The crossing of the River Meuse had to be achieved in under four days or the French would realise it was the main attack and would bring enough forces in to collapse it like a house of cards. On May 10, as the first German forces crossed the Luxembourg border and disarmed the surprised border guards, the clock began ticking.

Not even three hours later, the first reconnaissance units of the 1st German Panzer Division were rapidly pushing over the River Our and were closing in on Martelange behind the Belgian border. Armoured reconnaissance cars and motorcycle companies were pushing the pedal to the metal, trying to secure bridges and traffic hubs, but when they reached the outskirts of Martelange, the bridges were already destroyed and they came under small arms fire from nearby defenders, small groups of the Chasseurs Ardennais, firing from well camouflaged positions. Scouting ahead, the Germans spotted fortified pillboxes, tank barriers and other obstacles aimed at delaying the main German force, while at least one powerful Belgian T-13, which would have made short work of the armoured cars, was patrolling nearby.

Hard pressed for every minute and with little choice left, the German commander ordered the motorcycle companies to dismount and take the Belgian positions on a hill overlooking Martelange. Armed only with machine guns, the men charged in a suicidal frontal move across the slopes towards the Belgian defenders, but the Belgian Light Infantry was totally caught off guard and surrendered or withdrew without any chance of resistance.

From Martelange onwards, the Germans pushed further to the west, through the valley of the Sauer River. That valley leads to the village of Bodange, at whose end a large hill rose, surrounded by the rivers Sauer and Basseile like the moat of a castle.

And on that hill Major Maurice Bricart, in command of the 5th company of the Ardennes Light Infantry, was growing concerned. Reports were flooding in of fighting all through the Ardennes, but nothing was very specific. He had faith in his troops, who were veterans of the area, and like all chasseurs, knew how to fight with small unit tactics. Armed with modern 1935/1936 Mauser rifles and the Model 30 light machine gun, their marksmen could hold their own against just about any enemy troops. Looking down from the hill to the valley, they were also in a fairly good position to use their rifle grenades.

They fought everywhere, shooting from behind trees and on the move, trying to throw the Germans off their precious timetable. The 1st Panzers were held up by the blown bridges and other the barriers in Martelange, but the motorcycle companies moved forward down the valley towards Bodange. Spotting the Belgian defences, they tried to repeat the same trick twice and rush the defenders by surprise, but without success this time.

One of Bricart’s combat patrols spotted the advancing Germans in the undergrowth, and after a quick exchange of surprised looks and cracking rifle shots, alarmed the others on the hills. Any further advance by the Germans was met with fierce resistance. Every time a field grey uniform was spotted, it was immediately pinned down with accurate rifle and machine gun fire. Bricart was on the phone, trying to reach his headquarters, asking for further orders. But no answer came. The line was dead – cut by German paratroopers working in the Belgian rear.

Hermann Göring, Luftwaffe commander and Germany’s favourite medal collector, sought to speed up the breaking of the Belgian border defences by sending in German soldiers by glider to attack the Belgian communication lines in the rear and spread chaos and confusion. Some had successfully landed near Wirty and cut local telephone lines and blocked the main roads. No messenger could get through to Bricart, but according to plan, the Ardennes Light Infantry was retreating all along the border. Their headquarters in Neufchateau sent out orders to disengage immediately. These orders did not reach Bricart.

Unaware of what was going on, Bricart’s 5th company held on to their last order: hold the border. True to their motto, ‘résiste et mords’, they would hold and bite like the boars they were. All afternoon, the men of the 5th company held out in their trenches and pillboxes, firing rifles and machine guns into the German attackers, who were forced to withdraw time and again, and the Belgian defenders were hitting the Germans where it hurt them the most – they were messing with their timetable. Shooting with extraordinary precision, they made the Germans pay dearly for every approach, but hadn’t anything heavier than grenade launchers.

The Germans realised that Bodange was impossible to take with infantry alone. The pioneers were frantically working on restoring the bridges and bring in artillery. First, the 3.7cm anti-tank guns and 7.5cm light infantry guns fired on the Belgian positions, but were unable to penetrate the heavy Ardennes blockhouses and the Belgians were just too well dug in. German radio operators called in heavier fire from a field-howitzer battery from nearby Warnach. The shelling increased and the shrapnel caused many bleeding wounds among the defenders, but still, they held. Only in the late afternoon, as four of the mighty 88mm guns were unleashed against the hill, did the Belgian defences crumble.

Still, in bitter house-to-house fighting, the Belgians fought on until they were finally forced to surrender. Bodange was taken at around 19:00, six hours after the first shots were exchanged. In truth, the heroic stand of the Chasseurs Ardennais was not planned, nor was it even requested by high command. It was the result of a total communication breakdown caused by German interference. In a way, the German glider infantry attack had simply the opposite effect it was supposed to have. Had Bricart’s men received the order to retreat, they would have disengaged long before the Germans could have reached Bodange. But the Chasseurs Ardennais stood true to their orders and held the border as long as they possibly could.

The fascinating story of the Chasseurs Ardennais in 1940 inspired us to write ‘Resist and Bite‘, which is featured on our Heroes album. Take a look at the lyrics we wrote here.

If you prefer a visual representation of this story, watch our Sabaton History episode, Chasseurs Ardennais – Battle of Belgium: