A Ghost in the Trenches

The modern concept of snipers, like so many other concepts of modern war, was born at the beginning of World War I. There had of course been soldiers tasked with skilfully taking out the enemy before that. In fact, the English term “sharpshooter” dates back to the Napoleonic wars and appears in print for the first time in an article in the Edinburgh Advertiser from 1801. That term seems to be a literal translation of the German “Scharfschütze”, which dates back to at least 1781.

The Bavarians and Austrians of this time were already deploying skilled hunters to take out selected individuals in the enemy line – given the range and quality of their front-loaded guns, and the nature of war mostly being advancing formations over open ground.

It was the development of better guns, and more importantly, better scopes that enabled the terrifying sudden death from far, far away by a single shot. And in 1914, the Germans pioneered the improved tactic by again employing skilled hunters, who were now equipped with strong binoculars and high precision scopes. Although their guns were at first of average quality, ranging effectively roughly 300 meters, they were soon equipped with the Mauser G98 rifle with a one kilometre range. As hunters, they were not only skilled shots, but also experts in patiently waiting out their enemy from a camouflaged position.

As the war bogged down into the trenches, these killers soon became a feared and very effective threat. At the time, an average German sniper would rack up 40 kills before he was unlucky enough to have his position vaguely estimated so that he could be eliminated by a barrage of artillery shells coming down on him. With a 40:1 kill rate, it didn’t take the Allies long to copy the German tactic, so that most units in the trenches on both sides were accompanied by one or several sharpshooters with long range guns and precision scopes, who were trained in the art of camouflage, lightning-fast visual analysis and extreme gun accuracy. Men that would have had to leave the relatively ‘safe’ trenches, crawl into no-man’s land or even sneak behind the enemy lines to deliver death and gather intelligence.

A special type of soldier was needed to do that kind of work and have a remote chance of survival, and Francis Pegahmagabow was that soldier.

Pegahmagabow was remarkable in many ways. He was a Canadian aboriginal, which meant that he was treated as a second class citizen in his own country, or rather not a citizen at all, as Canada at the time did not grant citizenship to people of tribal native descent. His exact date of birth is unclear, but it was some time around March 9, 1891, on a reservation now known as Shawanaga First Nation.

The newborn Francis was discovered next to his mother who died giving birth to him. He grew up in an adopted family who were part of the Parry Island Band, which is now the Wasauksing First Nation.

Pegahmagabow made his living working on the Great Lakes and as a musician in a band. While he was a sailor, he was given a small leather pouch as a protective talisman, and the story goes that his belief in its protective powers was what would propel him to superhuman feats on the battlefields in France.

The war eventually broke out and the recruiters of the Canadian army weren’t keen on enlisting men from the native tribes, and even turned away volunteers at times. But Francis had his sight firmly set on joining the war, and he enlisted immediately. By August 20, 1914, Francis was on his way to Valcartier, Quebec, the training base for Canadian soldiers bound for Europe. Soon after that, he found himself in England, and in February 1915, he arrived in France to train trench warfare tactics in the Ypres salient.

When deployed to the front two months later, he was confronted with the first German gas attacks. The trenches were a shocking experience – the constant fear of death from artillery fire, snipers, mines, bombardment from the air, and then there was the hellish experience of going over the top to face the enemy’s wall of gunfire. Most soldiers did what they had to do to survive and followed orders, while many soldiers broke down or were killed before they could even decide what to do. But there were a few men like Francis Pegahmagabow who seemingly found themselves at home and went far beyond the call of duty at immense personal risk. 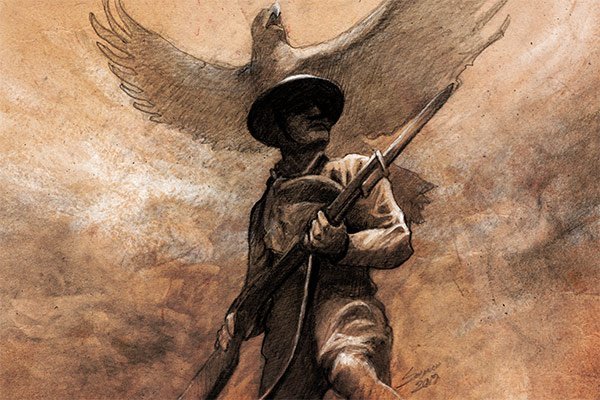 Francis was skilled in slipping through and between the trenches unnoticed. His eyesight was exceptional and his marksmanship was excellent, so he was assigned as the battalion sniper.

During WWI, snipers were also used to run messages between headquarters in divided trenches, gather intelligence close to the enemy line and carry out other dangerous missions in no-man’s land. But Peghamagabow seemed to seek out immediate personal danger as a thrill. At night, he snuck into the German trenches to stand silently beside the enemy watch posts, just to slip away again unnoticed. He even entered the sleeping quarters of the German soldiers to cut off pieces of the uniforms they were wearing while they slept.

The trenches were possibly the closest thing imaginable to hell on earth. They were muddy, dirty, loud and lethal. There was a constant threat of mortars, machine guns and patrols, as well as death and destruction. If soldiers didn’t succumb to the fighting, they were likely to suffer from the various diseases that spread in the close unhygienic quarters. An assault of the senses, even the smell of the trenches would haunt the memory of the men – the odour of thousands of men living in close quarters, their faeces and urine, rotting food, moulding cloth and decaying wood, the smell of sulphur, carbon, salt-peter and other chemicals from the fighting, and most significantly, the overpowering stench of rotting bodies from the thousands who lay unburied in no-man’s land.

In this apocalyptic world, Francis would navigate silently, unseen and seemingly untouchable. He was truly a Ghost in the Trenches.

As 1915 passes into 1916, he continued to restlessly stalk the enemy, and his service did not go unnoticed. On August 26, 1915, he was promoted to Lance Corporal.

Lance Corporal Pegahmagabow’s service was impeccable. In March 1916, he was nominated for the Distinguished Conduct Medal: “He carried messages with great bravery and success during the whole of the actions at Ypres, Festubert and Givenchy. In all his work, he has consistently shown a disregard for danger and his faithfulness to duty is highly commendable.”

Although he did not receive this, the second highest award for gallantry in the British army, he was part of the first group of 78 Canadian soldiers to be awarded the Military Medal. He himself believed that he was protected by the spirits, and until the end of 1916, this appeared to be true. But eventually, even Francis was hit by reality.

Pegahmagabow suffered a leg wound that would keep him out of action for many months, well into 1917. Most soldiers would have welcomed the opportunity to stay away from the war for a bit, but Francis was not “most soldiers” and wanted to be back at the front.

At first, he was not allowed to go back, but he began a campaign of letter writing to convince his superiors to allow him to return to active duty. He was back at the front lines by May.

The Ghost in the Trenches continued haunting the German lines throughout the summer of 1917, and in the fall, once again a Corporal, he fought at Passchendaele. He was recognised with a second military medal for his exceptional work maintaining contact with units on the flanks and for guiding lost relief units. But at this point, the war started to take its toll even on Francis. He had been fighting constantly for almost three years; he had taken sight of hundreds of enemy soldiers through his scope, enlarged enough so he could see their facial features, just before he killed them instantly with a shot to the head. Surely, he did what most soldiers do: justify it to himself with the lives he saved on his own side. He must have had a capacity to compartmentalise and objectify the enemy to cope with the killing. But how long could he keep that up for and how long could his body sustain this pressure?

The answer for Francis was three years. At Christmas, he was diagnosed with pneumonia and sent into convalescence until May 1918. He returned to service working through the summer of 1918, but by this point, he was showing signs of Post-Traumatic Stress Disorder. He was becoming insubordinate and was cited for disciplinary problems, yet he continued his service over the summer, sniping and running messages at, among others, the Second Battle of Arras, where he earned the second bar on his Military Medal.

This was his commendation:
“During the operations on August 30th, 1918, at Orix Trench, near Upton Wood, when his company were almost out of ammunition and in danger of being surrounded, this NCO went over the top under heavy machine gun and rifle fire and brought back sufficient ammunition to enable the post to carry on and assist in repulsing heavy enemy counter-attacks.”

But Francis was now more of a ghost of himself than anything else, and by early November he was sent to England suffering from “exhaustion psychosis”. Only days later, the war ended and he was discharged back to Canada. He concluded the First World War as one of only 37 Canadian soldiers to receive two bars on their Military Medals and was the most highly decorated aboriginal soldier in Canadian history. He was credited with 378 sniper kills, which is more than anyone else from any country in the first world war, and he captured over 300 prisoners.

These numbers make it easy to understand that like every man and woman who served at the front, he returned changed forever. But true to his nature, Francis, although changed, was not broken. He experienced acceptance as an equal from men serving by his side in battle and then returned to Canada where he was anything but equal. He began a lifelong struggle for full citizenship and equal rights for aboriginal Canadians. He served two tenures as Chief of the Parry Island Band and continued his involvement with the armed forces by joining the local militia regiment, the 23rd pioneers, where he served as company Sergeant Major from 1930-1936.

On August 5, 1952, Francis Pegahmagabow died and was buried on the Wasauksing First Nation, close to where he was born.

Like many of his generation, he took the suffering of war that he had endured and inflicted and turned it towards changing the world for the better. Born a non-desirable orphan, he is today, over 100 years after his service, recognised in Canada as an important part of Canadian military history, with the Third Canadian Ranger Patrol Group named in honour of Corporal Francis Pegahmagabow. To his allies, he was a hero and at times a saviour. To his enemies, he was swift death. And to all of us, he should be an example of how terribly personal war is.

Francis Pegahmagabow’s incredible story inspired our song ‘ A Ghost in the Trenches ‘, which is featured on our album, The Great War. Take a look at the lyrics we wrote here.

If you’re interested in a more visual interpretation of the above story, watch our Sabaton History episode, A Ghost in the Trenches – Francis Pegahmagabow: