At 05:10 in the early morning of November 11, 1918, the German delegation agreed to sign an armistice. The nearly four and a half years of unrelenting fighting, killing and dying of the First World War seemed to be finally coming to an end. The news of the upcoming ceasefire spread like wildfire through the ranks of both sides. Fighting would be stopped at the eleventh hour of the eleventh day of the eleventh month. 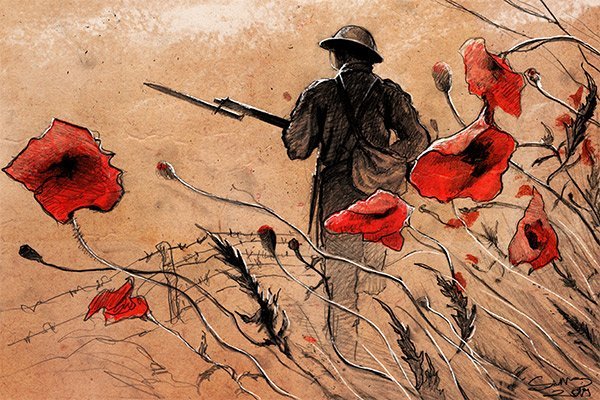 But there was still time left until then. Attacks had been planned and scheduled for the morning, ammunition for the artillery had been prepared and soldiers had already gathered in the trenches. Indeed, the celebrations in the ranks were quickly quelled by the commanders, because the attacks planned for the day were still on. Only a handful of officers purposefully delayed or just ignored the orders to send their men into battle to maybe die mere hours before the end of the war. Some career officers saw their last chance to win glory and recommendation, others as their duty to follow Allied Supreme Commander Ferdinand Foch’s desire to punish the Hun as much as possible. So, while people in cities all over the world went out in the streets to celebrate the end of the war, the men in the trenches geared up to fight one last time.

Up until 10:59 of the eleventh day of the eleventh month, the Allied artillery shot as many of their shells on the German positions as possible, as the men went over the top. The surviving German machine guns and artillery gave answer. On this morning alone, 11,000 casualties littered the ground on the Western Front – ground that had already been promised to be relinquished by German High Command upon signing the armistice.

The end of The Great War

At 11:00, the guns went silent. The Great War came to an end. The final attacks, the last hurrah, had achieved nothing but more death. Who could have justified the fate of those last soldiers dying in this war? What could have been said to the hundreds of grieving widows, parents, children and friends about this bloody morning?

The Belgian city of Mons was retaken that morning by the British. It was the place where the war had really started for the British Expeditionary Force back in the summer of 1914. Now, it was the same place where it had ended, for the cost of one million lives from all over the British Empire. The last soldier to die here, the Canadian George Price, killed at 10:58, would be buried at the same cemetery as the first British soldier that had fallen here. For the Generals, it seemed like poetic closure. For most people, it simply symbolised the futility of it all. Many might have remembered the words of Laurence Binyon from back in August 1914, who wrote a poem honouring the fallen of the first battles of the war. A poem whose words were by 1918 inscribed into monuments all over Great Britain:

They went with songs to the battle, they were young,
Straight of limb, true of eye, steady and aglow.
They were staunch to the end against odds uncounted;
They fell with their faces to the foe.

They shall grow not old, as we that are left grow old:
Age shall not weary them, nor the years condemn.
At the going down of the sun and in the morning
We will remember them. – Laurence Binyon

It is often said that poetry speaks directly from a man’s soul. Although it is defined by sets of rules and the need for structure and aesthetics that are only mastered by a few, poetry could be written by anyone anywhere. During the Great War, people wrote – soldiers often needed a way to occupy their thoughts. Left with not much else than a pencil and a piece of paper, they began putting down those thoughts and feelings, and wrote down what they had experienced and witnessed during times of extreme stress, hardship or excitement.

The air is loud with death,
The dark air spurts with fire,
The explosions ceaseless are.
Timelessly now, some minutes past,
Those dead strode time with vigorous life,
Till the shrapnel called ‘An end!’
But not to all. In bleeding pangs
Some borne on stretchers dreamed of home,
Dear things, war-blotted from their hearts. – Isaac Rosenberg – Dead Man’s Dump

Unlike a letter or a diary, poetry had to be written and re-written time and time again to get the language and the rhythm right. But when well-crafted, it could speak and even scream the feelings of people who lived through the same times and the same experiences, but who did not have the words to express it themselves. Beginning before antiquity, before Homer’s Iliad spoke of war and tragedy in epic form, and continuing thousands of years later, ordinary soldiers tried to tell the story of their war, in this case, the Great War. In the beginning they spoke of grandeur and glory to be won on field of honour:

War has its horrors, but has this of good—
That its sure processes sort out and bind
Brave hearts in one intrepid brotherhood
And leave the shams and imbeciles behind.
Now turn we joyful to the great attacks,
Not only that we face in a fair field
Our valiant foe and all his deadly tools,
But also that we turn disdainful backs
On that poor world we scorn yet die to shield—
That world of cowards, hypocrites, and fools. – Alan Seeger – On Returning to the Front after Leave

But as the war grew longer and more savage and brutal over the years, its poetry changed as well. It began focusing less on ideals and heroes, and more on death and loss. Wilfred Owen made a name for himself by writing about the tragedy of the war, and wrote in the preface of his book in May 1918: “This book is not about heroes. English Poetry is not yet fit to speak of them. Nor is it about deeds or lands, nor anything about glory, honour, might, majesty, dominion or power, except War. Above all I am not concerned with Poetry. My subject is War, and the pity of War.”

If in some smothering dreams, you too could pace
Behind the wagon that we flung him in,
And watch the white eyes writhing in his face,
His hanging face, like a devil’s sick of sin;
If you could hear, at every jolt, the blood
Come gargling from the froth-corrupted lungs,
Obscene as cancer, bitter as the cud
Of vile, incurable sores on innocent tongues,—
My friend, you would not tell with such high zest
To children ardent for some desperate glory,
The old Lie: Dulce et decorum est
Pro patria mori. – Wilfred Owen – Dulce et Decorum Est

Those words, “The old Lie” as he calls it, are Latin, written by the Roman poet Horace. They mean “It is sweet and fitting to die for the homeland.” Owen did not agree.

One poem that immortalised the dying in Flanders and in the Great War overall was ‘In Flanders Fields’, by John McCrae. McCrae was a military doctor and a Major of the 1st Brigade of Canadian Field Artillery. In April and May 1915, they were fighting in the Second Battle of Ypres. It is believed that after witnessing the death of a dear friend, McCrae looked out over the bombed out battlefield, devastated, torn and blasted. But in that grimness, the poppy flowers still bloomed, despite all the poison and death in the soil. Those small crimson flowers bloomed and were soon associated with the blood the men had shed. When the wind blew strongly and the poppy petals flew around and settled on the field, it was like the blood of the fallen drenching the earth once more.

In Flanders fields the poppies blow
Between the crosses, row on row,
That mark our place; and in the sky
The larks, still bravely singing, fly
Scarce heard amid the guns below.

We are the Dead. Short days ago
We lived, felt dawn, saw sunset glow,
Loved and were loved, and now we lie
In Flanders fields.

Take up our quarrel with the foe:
To you from failing hands we throw
The torch; be yours to hold it high.
If ye break faith with us who die
We shall not sleep, though poppies grow
In Flanders fields. – John McCrae 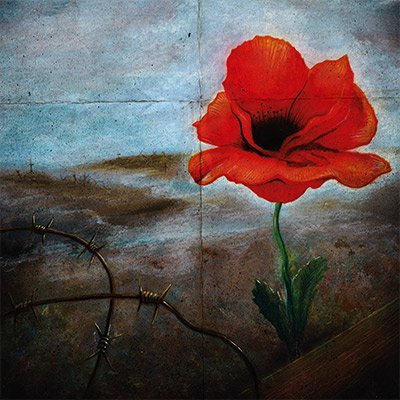 A universal symbol of remembrance

This phenomenon was observed by the locals as well. Women sold poppies and made artificial ones out of cloth to collect money for war orphans who lived close to the battlefields. In August 1921, the artificial poppies were brought to London for the first time and attracted the attention of the British Legion, a recently formed charity organisation.

Immediately they began to import and distribute the poppies as well. On the next Armistice Day, they would sell them to gather money for the benefits of the many thousands of unemployed and struggling ex-servicemen. A first order for 1.5 million poppies was placed. On November 11, on every corner in London, at every major park, theatre or hotel, bands of young girls sold poppies to the public. It was 1 Shilling for those made from silk and Threepence for those made out of linen. Petals from actual poppy flowers were sold for 5 pounds, and single whole poppy flowers were auctioned for up to 90 pounds.

Soon the ‘poppy-craze’ caught on in London and beyond. Nearly every pilgrim and tourist who came to honour the fallen on Armistice Day at the Cenotaph wore one on their collar, and soldiers were given permission to wear them on their uniforms. By the end of the day, around 8 million poppies had been sold, and it was still not enough to meet the demand. A great deal of money had been gathered for victims of the war.

We took the moving words of John McCrae’s poem and transformed them into a song entitled ‘ In Flanders Fields ‘. Take a look at our lyric page here.

If you’re interested in a more visual interpretation of the above story, watch our Sabaton History episode, In Flanders Fields: