Far from the Fame

Karel Janoušek is among the most tragic figures of World War II. He was a heroic Czech airman who played a key role in the pivotal Battle of Britain, only to be imprisoned in his own country after the war.

The story of Karel Janousek

Karel Janousek was born on October 30, 1893, in Prêrov, in Moravia-Silesia – the Czech domains of the old Austro Hungarian Empire. Growing up in a large family, Janousek prepared for a future as a clerk, and was studying at a German business school when the Empire declared war on Serbia in July 1914 and the First World War began.

With major battles between the Austro-Hungarian and the Russian armies soon ravaging the Eastern Front, turning the fields of Galicia into a graveyard for hundreds of thousands of young men, the empire’s war effort was close to collapse. In desperate need of fresh recruits to bolster the ranks, Karel Janousek was conscripted into the army in June 1915. After completing his training in the 57th Imperial Royal Landwehr Regiment, he was sent away from the Eastern Front to the newly opened Italian Front. This was because of his Czech heritage.

The Czechs were often portrayed as unreliable elements of the Austro-Hungarian Empire. They and the Slovaks were dissatisfied with Imperial rule and their lack of autonomy and self-determination. So, doubting their loyalties and suspecting that various Slavic peoples would not fight well or even desert to “brother” Russian Slavs, the Czechs and Slovaks ended up fighting in the numerous Battles of the Isonzo River until the Eastern Front nearly collapsed under the weight of Russia’s mighty Brusilov Offensive in the summer of 1916.

Even the possibly unreliable Czechs had to be pulled away to fight the Russian steamroller, which was very close to knocking the Austrians out of the war. Sometime around July 2, 1916, the high water mark of the offensive, Janousek was captured by the advancing Russians and sent to a Prisoner of War camp in Ukraine.

Russian High Command was well aware of the political discontent of the Czechs, Slovaks and other Slavic soldiers serving in the Austro-Hungarian army, and planned on turning those men against their former emperor. Janousek, like many other captured Czechs, took up the offer to switch sides in the hope that after the war, they might be allowed to rule their own country. On August 1, he joined the II Volunteer Division of the Serbian Army in Odessa, and in October 1916 became part of a Czechoslovak Volunteer Rifle Regiment north of Kiev. After Russia’s February Revolution in 1917, the Russian army slowly but surely disintegrated, and as Janousek’s unit was transferred to the front in July 1917, many Russian soldiers were simply deserting. But the Czechs and Slovaks remained, believing in their cause.

In the battle of Zborov they proved their worth, breaking through the Austro-Hungarian lines on a broad front and taking hundreds of prisoners in the process. It became a huge PR victory too, and the beginning of the legend that was the Czechoslovak Legion. Janousek himself was wounded on July 18 and did not see further action until after the October Revolution tore Russia apart. The anti-Bolshevik faction of the Legion refused then to surrender their arms. Fearing for their lives, they were forced to become involved in the Russian Civil War. Since the way to the west was blocked by both Bolsheviks and Austria-Hungary, they captured an armoured train and fought their way east to the Pacific and all the way around the globe, until they finally made it to Prague in February 1920. The mythos of the Legion and the overall Czechoslovak army was an integral part of the new state that was Czechoslovakia, and Janousek remained close to the army.

Taking to the skies

After he had graduated from the War College in 1923, Janousek joined the new Czechoslovak air force and began training as pilot. Soon he was commander of an air-reconnaissance course at Cheb in Bohemia, where he became fascinated with meteorology and wanted to find out how reduce the impact of bad weather on aircraft.

He was additionally fascinated by the doctrines of the Italian theorist Giulio Douhet. On aerial warfare, Douhet wrote: “There is no need for defensive tactics, since the skies are vast and you can’t build trenches like on the ground. The bomber will always get through, so the only option left is the offensive.”

Janousek taught Douhet’s theories on aerial superiority and how to maintain an aggressive spirit in the skies. As he studied further at Prague university in 1936, Nazi Germany set its sights on the Czechoslovak state. The dissolution of that state and its armies followed the German occupation in March 1939, which forced Janousek and hundreds of defiant soldiers and officers to escape from Nazi rule. 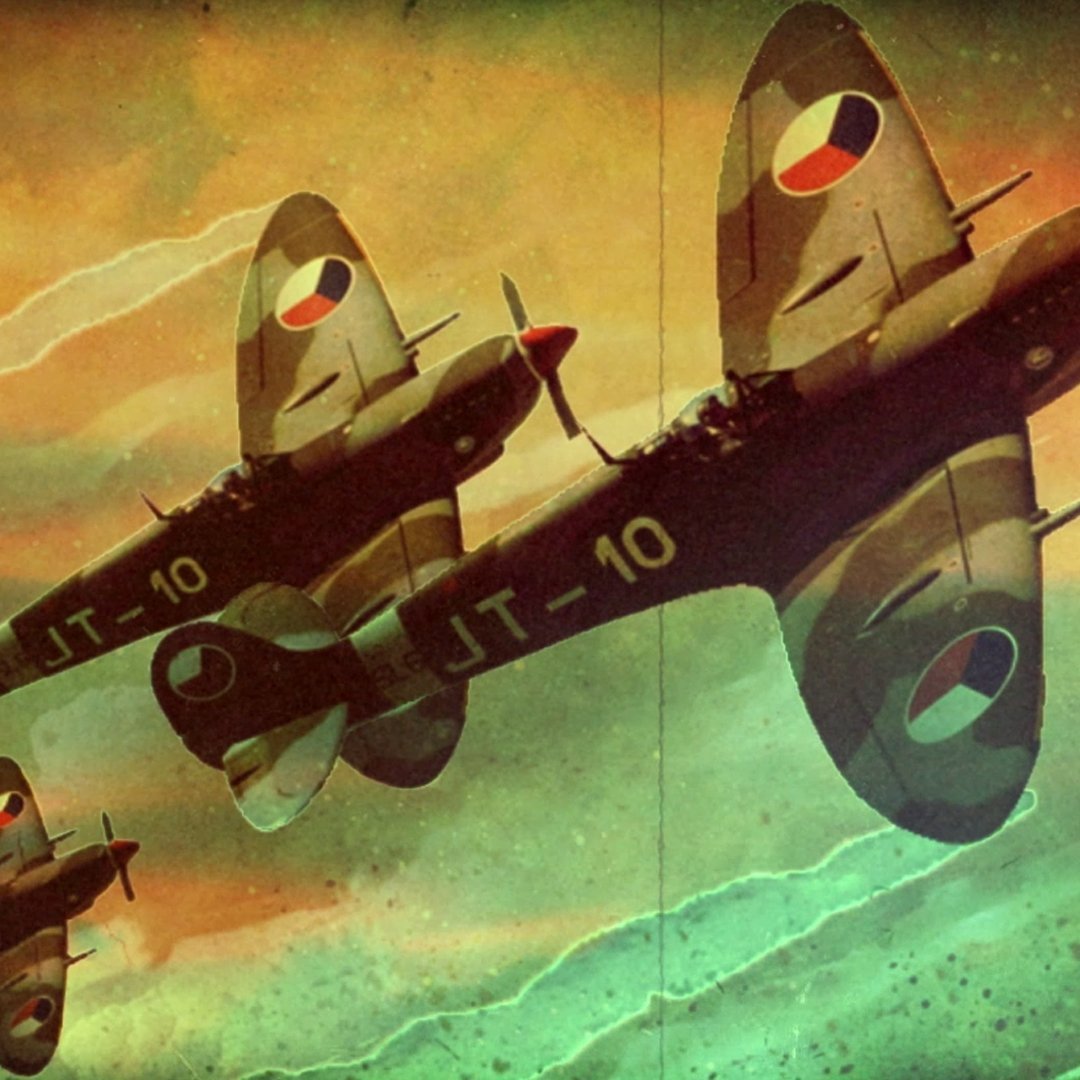 With the help of the underground resistance ring Obrana národa, Janousek fled to France, travelling though Greece and French Lebanon, reaching Paris in December 1939. He immediately got in contact with the French government and other Czech officers, trying to create a united Czechoslovak Air Force. But like the rest of the French army at the time, his plans were hindered by logistical and leadership deficiencies within the French army until it was too late.

In the face of the German invasion in June 1940, Janousek fled once more, this time via a Dutch ship to England. The British high command was better organised, particularly with regard to their air force, but Janousek and the other officers still had to jump through a lot of diplomatic hoops until they were able to convince Winston Churchill and co of their value.

Once established, the free Czechoslovak Air Force became a strong asset to the defence of the island. Fighting in Royal Air Force uniforms and planes, they fought the Germans throughout the Battle of Britain. The experienced Czechoslovak fighter pilots were awarded many medals. Janousek especially, although disliked by many of his superiors, had been very much valued by the British as the best Czech commander around. By 1941, the Czechoslovak Air Force had over 1,600 active service members.

Janousek was a masterful organiser, and as Air Vice-Marshall spent much time overseeing the squadrons and their training, he made several trips to Canada and the US to teach there and was even knighted by King George VI as Knight Commander of the Order of the Bath.

In a speech to the British people, he emphasised that in their common fight against fascism, it was the qualities of: “liberty, decency, kindness and common sense” that made life worth living.

But his fame did not escape his enemies’ attention. Back in occupied Czechoslovakia, the Nazis killed his wife and a sister, and one of his brothers perished in the concentration camps of Auschwitz and Buchenwald. Many others from his large family were jailed and tortured in order to get information about him and the Czech resistance.

After five years of fighting for a different country in a foreign uniform, the war came to a close and it was time return home. But the journey home was problematic. As the Americans withdrew westward, all of Czechoslovakia fell under the Soviet zone of influence. Relocating British fighter squadrons back to Prague was already a diplomatic nightmare, yet still, by August 1945, Janousek and his men were allowed to return to their home country as the official Czech Air Force.

A threat to the regime

However, even though the Nazis were gone, the country was by no means free. The supposed alliance between the Soviets and the Western Allies was breaking apart mere months after the end of the 3rd Reich. The Czech Communist secret service monitored every step Janousek and his pilots made. Every man who had fought for the western Allies was now suspicious, especially Karel Janousek, who kept in contact with the British. He was put on a list of potential threats to the regime. The situation worsened dramatically after the coup of the Czech communists in February 1948. Backed by the Soviets, a wave of terror and persecution swept through the country. Tens of thousands were condemned in political show trials, and around 6,500 of them were executed, although the exact number is unknown.

Janousek lost his job, and as it was fruitless for him to find any new position in the military. He decided to flee the country once again, but this time his escape attempt was betrayed by a double agent. He was arrested and quickly court-martialled as a traitor and deserter. The communists stripped him of everything – his rank, his awards and even his doctorate – and sentenced him to 18 years in prison. While in prison, a guard offered to help him flee, but although Janousek refused, his sentence was increased to life in prison.

In 1955, the political mood shifted again, and Janousek’s prison sentence was reduced to 25 years. He would finally receive an amnesty in 1960. After the Prague Spring in 1968, Janousek was rehabilitated but, it would take another 22 years until his rank and awards were restored.

Janousek passed away before that happened, on October 27, 1971. After the fall of the Czechoslovak communist regime, he was posthumously promoted to general and all of his 40 awards, British, French, Russian and from many other countries, were officially returned. His service and sacrifices were honoured once again.

Karel Janoušek’s story heavily inspired our song ‘ Far From The Fame‘. Take a look at the lyrics we wrote here.

If you’re interested in a more visual interpretation of Karel Janoušek’s story, watch our Sabaton History episode, Far From The Fame – Karel Janoušek: