In late 1915, during the Great War, British High Command was frustrated about the war’s progress. Not only was the Western Front as bloody and immobile as ever, the Gallipoli attacks had yet to bear any fruit, and the success of the Kut-al-Amara Expedition in Mesopotamia was uncertain. The need to open yet another front seemed pressing to many, but forces were spread thin, with the last available contingents having been sent to Egypt to safeguard the Suez Canal, which the Ottomans had attacked earlier in the year.

But in Cairo, a new opportunity arose as the Sharif of Mecca, Hussein bin Ali of the Hashemites, offered the British a deal. The Sharif dreamed of building an independent Islamic caliphate and in exchange for assistance – money, guns and supplies – would call upon the Arabs to revolt against Ottoman rule.

The British Chief of Intelligence there, Gilbert Clayton, was intrigued. An Arab force running wild in the Ottoman’s rear, disrupting the stability of the empire from within, was quite a proposal, though an independent Arab state on the Arabian Peninsula, and in the north from Syria to Mesopotamia as the Sharif envisioned, was absolutely not in the Entente’s interest.

Negotiations dragged on until March 1916 when Clayton succeeded in drawing the Arabs in without making concrete concessions. Instead, British High Command let the Arabs think that they would get a triumphant entry into the holy sites and would even take Damascus. An Arab army would be created, accompanied by carefully chosen British officers. One such man was Thomas Edward Lawrence. 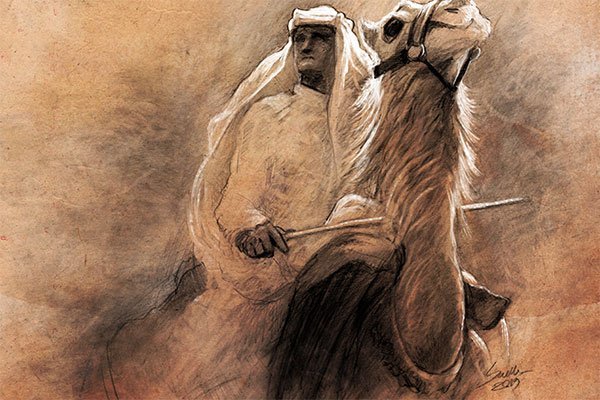 As a young man, Lawrence had been charmed by Charles Montagu Doughty’s “Travels in Arabia Deserta” and chose to study what was then called orientalism, which was Middle Eastern studies and the Arabic language. He was not an imposing figure, standing only 1.65 m tall, but he compensated with intelligence, passion and a fair amount of showmanship. He was assigned to the British officer corps in Egypt, spending most of his time collecting the necessary maps about the Near East and supervising the decoding of telegrams between Gallipoli and Cairo. Lawrence’s expertise in the cultural, geographical and religious characteristics of the region made him an ideal candidate for this new mission.

By June 1916, Lawrence and a group of British officers were on their way to support the Arab revolt that been proclaimed by Faisal, the son of the Sharif of Mecca. In and around Mecca the rebels had already overwhelmed the small Ottoman garrisons. However, the great revolution had failed to materialise. There were some intellectual circles in the big cities who supported the idea of an independent Arab state, but the bulk of the population had remained pro-Ottoman. The deliberate revolutionary conflagration did not materialise. Ottoman soldiers were not deserting in droves to the Sharif as hoped.

Faisal welcomed Lawrence in his camp, though, and dressed him in Arab clothes. This was an important gesture. Wearing the looser Arab dress instead of the tight British uniform, he visibly became part of the Arab culture, and slowly gained the trust of the other tribesmen. Lawrence slipped into his ‘Arab skin’, as he called it, and could freely move in and out of Faisal’s tent.

An actor on the world’s stage

While British High Command judged the value of the Arab revolt purely by the numbers of rebels, or the amount of rifles, cannons and gold they had to supply them with, Lawrence began to understand the Arab struggle and their desire to live freely according to their religion and customs, as he spent weeks on end travelling with them through the desert. The more he came to know them, the less he supported the British Empire for its arrogance towards “lesser civilizations” and its ignorance of the Arab world. On the other hand, though, Lawrence knew very well that he could never fully become one of them. He could make the tribesmen respect him and could befriend them, but he would still forever be an infidel to them.

He felt that a shadow of loneliness and contempt for the world was creeping over him. More and more, he felt like he was playing a role, an actor on the world’s stage, moving from one civilisation to the other. Sometimes he was a British officer leading the Arab revolt revolver in hand, and sometimes he was a traveller in Arab clothing, riding for days on end through the desert on camelback.

By the end of 1916, Faisal’s host had been constantly on the run from the Ottoman army. The Bedouin were tough and fearsome warriors, but totally unaccustomed to the tactics of modern war. They were not willing to dig trenches, and even if they were persuaded, they refused to get in them. They wanted a mobile fight, as they had had for generations, attacking quickly and in a fury. And if things didn’t go their way or they were outgunned, they retreated and evaded their enemies. Lawrence had to therefore accept that he could not turn the Bedouin into modern soldiers. Although courageous, they were easily spooked by artillery fire and the sight of a single airplane could throw them into disarray. They could be trained to work machine guns and handle explosives easily enough, but would not parade like the European armies, nor could they be drilled and ordered around. Lawrence had to work differently with them.

Once more the British financed an army for Faisal, recruiting thousands of eager warriors from the local tribes. They made for the city of Wagh, and overwhelmed the surprised Ottoman garrison, slaughtering the defeated troops and plundering everything of value. In fact, the Bedouin leaders refused to carry on until they had finished celebrating – it was custom. Nowhere else was it more obvious how modernity clashed with old traditions.

Through the long desert rides, in an environment totally unknown to most of his people at home, Lawrence tried to figure out how to maximise the strength of Bedouin warfare. They avoided the main Ottoman units, and instead waited in ambush for smaller reserve units or supply columns. In guerrilla fashion they raided minor camps and attacked telegraph stations, and were more of a nuisance than a real threat to the empire. That was until they set their sights on a major lifeline of the empire – the Hejaz railway that ran between Damascus and Medina.

Lawrence led the ambushes, laying mines and explosives on the railway line. Then, at the crucial moment, as the mines exploded and the locomotive derailed, he let the Arabs loose. Supported by Lewis machine guns, the Arabs first shot the carriages to pieces and then stormed the wreckage with scimitars and daggers, killing the survivors.

“The Arabs were fighting like devils, the sweat blurring their eyes, dust parching their throats; while the flame of cruelty and revenge which was burning in their bodies so twisted them, that their hands could hardly shoot. By my order we took no prisoners, for the only time in our war.” – a quote from Pillars of Wisdom, the autobiographical account of Lawrence.

‘The man with the gold’

By the end of 1917, the British had pumped nearly 2 million pounds worth of gold into the saddlebags of the Sharif and his sons, and Lawrence was known as ‘the man with the gold’. The constant losses on the Hejaz railway and the British offensives in Palestine had put steady pressure on the Ottoman forces, allowing the Arabs to move more freely. The capture of Aqaba solidified Lawrence reputation as a Bedouin leader, and more and more Arabs began joining his host, even as Ottoman protection money was drying up.

By September 1918, the Palestine front finally collapsed under the weight of the British offensives. The Ottoman army was in full retreat and chaos raged from Palestine to Syria. Most of the holy land fell under British control, and together with Lawrence’s Bedouins, they pursued the disorganised Ottomans. But this phase of the fight showed another side of the guerrilla war that was not just romantic camel rides in the desert. The brutality of the Arabs was well known, but it became so problematic that British officers even sometimes allowed their prisoners to keep their guns to defend themselves against the Bedouins. And as the allied forces moved on Damascus, it also became clear that the British had no intentions of allowing the Arabs their own independent caliphate.

Instead, the Middle East was to be split up in spheres of influence among the British and French as soon as the Ottomans had lost control over it. The economic and geostrategic importance of the region were too important after all. They had signed the Sykes-Picot secret agreement already in 1916, with the land carved up by lines drawn on a map with no regard for tribal or religious boundaries, an agreement which bears a fair amount of blame for 100 years of Middle Eastern strife. 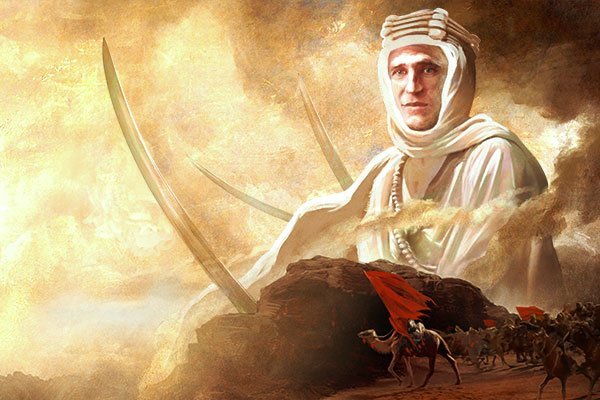 Lawrence found himself confronted with events moving beyond his control. As the Great War ended, Arab independence seemed to be further away than ever and he, who was soon to be considered a hero to the British public, felt like a traitor. He published his experiences in his book, Seven Pillars of Wisdom, which stated:

“The Cabinet raised the Arabs to fight for us by definite promises of self-government afterwards. Arabs believe in persons, not in institutions. They saw in me a free agent of the British Government and demanded from me an endorsement of its written promises. So I had to join the conspiracy, and, for what my word was worth, assured the men of their reward. In our two years’ partnership under fire, they grew accustomed to believing me and to think my Government, like myself, sincere. In this hope they performed some fine things, but, of course, instead of being proud of what we did together, I was bitterly ashamed.”

T.E. Lawrence would soon become the legendary Lawrence of Arabia, a modern Robin Hood to the British public. His tale was a tale of courageous fighting, of distant journeys and exotic oriental adventure. Although it is often hard to tell what truly happened and what was Lawrence’s exaggerations and dramatisations – which are still debated by historians today – his legendary status is unquestionable, and like the Red Baron’s, it has lived on for 100 years after the Great War.

Thomas Edward Lawrence died on May 19, 1935 in a tragic motorcycle accident.

Our song, ‘Seven Pillars Of Wisdom‘, which is featured on our album, The Great War, was heavily influenced by Lawrence of Arabia’s story. Take a look at the lyrics we wrote here.

If you prefer a visual interpretation of this story, watch our Sabaton History episode, Seven Pillars of Wisdom – T. E. Lawrence of Arabia: