From the early 1930s, interest in atomic energy had grown dramatically. New research by scientists, including Ernest Rutherford and James Chadwick, proved that by colliding an atom with a neutron, the atom could be broken down, and by bombarding unstable elements, a huge amount of energy was released during that breakdown process.

The German chemists, Otto Hahn and Fritz Straßmann, had further discovered that bombarding a uranium atom with a neutron would lead to fission, in which more neutrons were released. Those, in turn, would split more atoms, creating a chain reaction that would not only release an incredible amount of energy, but could even lead to the creation of new elements – a discovery that got Hahn a Nobel prize.

But as the Nazis steered Germany towards war, new questions arose: could this new discovery be weaponised? Could this new energy be released in a bomb? By early 1940 the German scientists, Kurt Diebner and Werner Heisenberg, thought the answers to those questions were ‘yes’ and ‘yes’. However, certain key components were needed to create such a bomb – one such component in releasing the nuclear energy of atoms was ‘heavy water’.

The core of this theoretical ‘atomic bomb’ would be Plutonium, surrounded by high explosives that would kick-start the atom-splitting chain reaction. But Plutonium does not occur naturally and must be artificially created in a reactor, where neutrons bombard Uranium to create it. This process was nearly impossible to control, so the scientists needed a moderator that would slow the neutrons down just enough to make it controllable. Such a moderator could be heavy water. Now, heavy water had a longer reactivity than normal water because of the heavy isotope, Deuterium, attached to the hydrogen atoms. This naturally occurs in water but only to a tiny extent, but it can be artificially produced through electrolysis.

One facility experienced in creating heavy water was the ‘Vemork’ Hydro Plant in the Norwegian municipality of Telemark. Vemork had produced power for a factory that created artificial fertiliser, and initially, had heavy water as a by-product. Over the years, it had recycled the heavy water, effectively enhancing its purity to over 99%. No one had really cared much about heavy water, but as it became clear that it would be essential in the atomic fission process, its value suddenly increased enormously.

Germany invaded Norway in 1940, but the heavy water reserves were smuggled out of Norway before the Germans reached the plant, though it would now produce new heavy water for the German atomic effort. But the chief manager of the plant secretly kept British intelligence up to date on German plans. In fact, many Norwegians felt obliged to help a newly formed branch of the British government, the Special Operations Executive (SOE) – formed in July 1940.

The SOE’s main task was to fight the German occupation in Western Europe through industrial and military sabotage. Specialists, elite soldiers, survivalists and secret agents would make contact with the occupied populations to find and recruit qualified volunteers to fight the Germans behind the lines. They would not just gather information, but actively kill and destroy German personal and equipment. Preventing Germany from developing an atomic bomb was on their to-do list.

The production of heavy water took a lot of time and energy. To produce a single pound took 25 tons of normal water and over 160,000 kw of energy, and it also had to be refined to a usable purity. Still, in May 1942, Heisenberg met with the Reichskommissar for Norway and other officers to discuss how to proceed with the German nuclear programme. Vemork was now producing 286 lb a month, and most German scientists agreed that they could use nuclear energy to power industrial factories to produce weapons – but to actually weaponise it was not thought possible just yet. The military officers, though, were more interested in an immediate solution, not theoretical bombs that would be ready in months or even years. Heisenberg knew that they had something, but he could not figure out how to bring it to life, though he secured further funding for the project and made plans to build a second hydro plant to increase the production of heavy water. 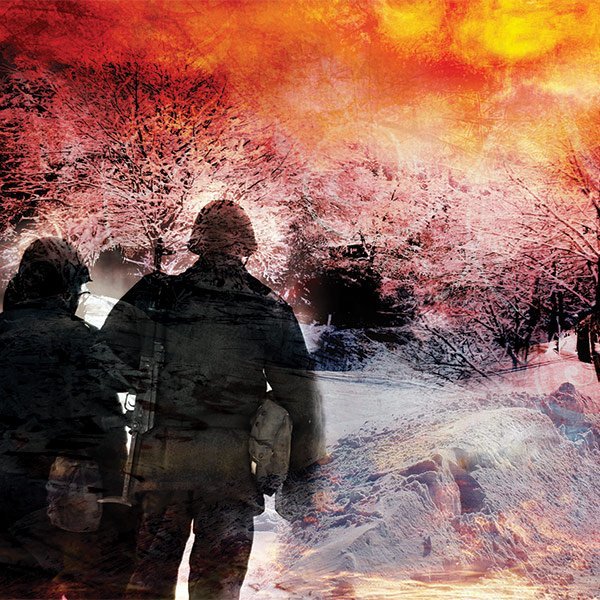 In the meantime, the SOE were stepping up their efforts to find a way to sabotage Vemork.

They acquired contacts inside the plant who leaked all sorts of information, but actually sabotaging the plant was another matter. Any attempt by workers to destroy or pollute the heavy water carried a death sentence, so the SOE begun recruiting and training a specialist force. These were mostly men from the Norwegian special forces or the Norwegian Army who already had experience in skiing, handling explosives and survival in winter conditions. At a school in the north of Scotland where the terrain was similar to Telemark, marksmanship, espionage, map-reading, close combat, camouflage and advanced survival techniques were taught to the recruits.

But the Germans were on high alert. Repeated attacks all over the country sabotaging railway lines and industrial plants had made them nervous. The Hydro Plant was now guarded by electrified barbed-wire, dogs, searchlights and hidden machine-gun posts.

By October 1942, a vanguard of commandos parachuted onto the Hardanger Plateau, close to the lakes where the Hydro Plant got its water. They were to make contact with the resistance and find potential landing places for gliders. On November 19, ‘Operation Freshman’ was put into action. Two airspeed Horsa gliders pulled by Handley Page Halifax bombers made for Norway with British paratroopers and Royal engineers aboard.

As they approached the landing area, heavy fog descended on the mountains. One of the bombers misjudged its height and smashed into the mountainside, while the glider crashed on the ground. The second glider missed the actual landing zone and crashed near the first plane. It was a disaster and the few survivors, who were in such a remote location, were unable to continue the mission. All they could do was wait for the SS to appear, and the Germans had issued the Commando Order. Every man identified as a commando was to be interrogated and then shot. No prisoners were taken.

Amid visions of V2 rockets armed with nuclear warheads falling on London, the SOE hastily agreed to send in the Norwegian special forces – a mission that was called ‘Operation Gunnerside’.

They would parachute onto the Hardanger Plateau and ski their way to the hydro plant to destroy the heavy water stock or the electrolytic equipment in the basement. On February 16, 1943, a British Halifax flying under German radar crossed into Norway. The men successfully parachuted down, and in white camouflage they skied towards the plant.

Now, Vermok had been under lockdown since the failed Operation Freshman. German intelligence had been sweeping the countryside for potential collaborators, and additional patrols, flood lights and anti-aircraft guns were now deployed. The direct way in – the single bridge crossing a ravine – was out of the question. There was a potential weakness though. A railway line that brought equipment into the plant. The train passed through a gate in the fence, and because of its prohibitive location, was presumably only lightly guarded. They were also tipped that there was a secret entrance to the basement through an open cable duct. 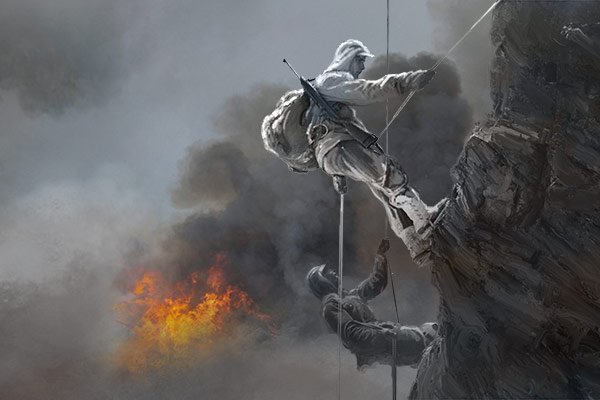 On the night of February 28, the commandos descended the ravine, crossed the icy river and climbed the other side in the harsh wind of the Norwegian winter, reaching the railway line undetected. There was only a pair of guards and enough cover to sneak by the gate just a few hundred metres away. They split into two groups. One was the demolition team, the other would cover its advance with sub-machine guns and grenades if the guards were alerted. With bolt cutters, they opened their way into the compound. While the demolition group made their way to the electrolytic capacitors in the basement, the other team assumed positions to engage the enemy, aiming their guns at the nearby barracks.

The basement door was locked, but as promised the cable duct was still open. Two commandos of the demolition team crawled inside and through the tight space. After 10 minutes of crawling, they reached a hole over the basement and lowered themselves down. They quickly overwhelmed the surprised workers and locked the door. In the room with the capacitors, they planted 20 nitrocellulose charges around the equipment and ignited the fuses. They then released the workers and dashed out of the door. The explosion that rocked the basement set fire to the building, but the heavy concrete had muffled the sound, and no alarm was raised. Running through the night, they linked up with the second team and made for the railway lines. As they reached the ravine, a shrill siren came from the compound, but luckily for the saboteurs, the floodlights could not catch them, and they disappeared into the night.

The raid was a success and the commandos dispersed. They had a better chance of escaping the German pursuers alone or in small groups, and their individual escape stories are just as interesting as this one. Some hid in plain sight among the civilian population, others made their way to Sweden. One man named Helberg had to escape James Bond-style from a German ski patrol that chased him down a mountain while he fired at them with his pistol.

All in all, the sabotage was one of the most impressive feats of the whole war, and although it did not put a stop to the German heavy water programme, it did put them behind schedule.

In November, the British conducted a bombing raid on Vemork that did little damage to the machinery, but that, together with the commando raid, convinced the Germans to relocate their heavy water to Germany. Norwegian spies got the time and place of the transport, though, and on February 20, 1944, the ferry – aptly named ‘Hydro’ – was sunk by Norwegian saboteurs and nearly all of the heavy water was forever lost to the Germans in the depths of Lake Tinn. If the Norwegian heavy water had reached Germany in time, Hitler might have had nuclear weapons after all.

At the end of the war, a second Hydro Plant was discovered in Bavaria. It had produced nearly enough heavy water for an atomic bomb.

Operation Gunnerside inspired our song ‘ Saboteurs ‘, which is featured on our album, Coat of Arms. Take a look at the lyrics we wrote here.

If you’re interested in a more visual interpretation of the above story, watch our Sabaton History episode, Saboteurs – Norwegian Heavy Water Sabotage: