Simo Häyhä was born on December 17, 1905, in the small Finnish municipality of Raujärvi, near the Russian border. His peers described him as a friendly, mild mannered, introverted man who kept to himself and to his daily work as a farmhand.

Rautjärvi is surrounded by the tough Finnish wilderness, so although Simo grew up in a quiet area away from city life, his own life was far from easy. The harsh, unforgiving winters forced the people of southeast Finland to come to terms with the wilderness around them. Early on, Simo excelled as a naturally gifted hunter, spending most of his youth outside in the forest shooting small game with an old bolt-action rifle.

By the age of 20, he had undergone his mandatory military service and had been promoted to corporal. He took part in several skiing and shooting competitions; he was a real bi-athlete and he was especially renowned for his rifle skills. Like most Finnish men, he had joined the national militia after his compulsory service. This was the Suojeluskunta, a service for young men that dated back to Finland’s declaration of independence in 1917 and the civil war the following year. The service trained men like Häyhä to be prepared for when Finland most needed them.

Such a time came on November 30, 1939, as the Soviet Union declared war on Finland. A man like Simo Häyhä, who experienced a simple upbringing, cared little for world politics or the ambitions of the dictators of the time like Josef Stalin. But like many Finns, he was fiercely independent and valued his and his country’s liberties above all. Those liberties would be lost if the Finnish people did not stand up to defend them, regardless of the size of the enemy. So as the call to arms came, Häyhä, like many of his countrymen, answered.

He joined the 13th Infantry Regiment in the Kollaa region, north of Lake Ladoga. The Soviet 9th and 14th armies aimed for a quick breakthrough across the Kollaanjoki River, but they were utterly unprepared to fight in such a region. Heavily wooded with barely any infrastructure at the best of times, the Soviets tried to advance now in one of the worst winters in modern history, with snow up to two metres deep and temperatures down to -30°.

Häyhä was given a Finnish Mosin-Nagant M28/30, which had been in production since 1928. A bit shorter and a bit heavier than the Russian manufactured rifles, but with the typical Mosin-Nagant reliability and accuracy, the M28 was an excellent sniper rifle. Nicknamed the pystykorva – pointy ear – for the large “ears” on the front sight, it would perform well in the hands of an experienced marksman like Simo Häyhä.

The Finns could not hope to win against the might of the Soviet army in a straight up pitched battle. The Soviets simply had more of everything – tanks, men and artillery. Instead, the Finnish art of war relied heavily on hit and run tactics, with men on skis who knew the terrain outflanking, infiltrating and ambushing the sluggish Soviet invaders, many of whom had no skis or did not know how to ski, ruining mobility. While the Finns were naturally familiar with the winter conditions, the Soviet forces were woefully not. Many came from the military district of Leningrad and had not even been supplied for a long, drawn out conflict. 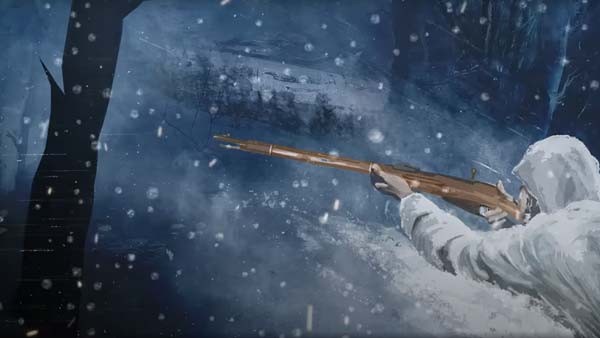 The winters in Finland are harsh and unforgiving, and even when the sun is out during the short days, it is still bitterly cold. Häyhä wrapped himself in a thick and heavy snowsuit, insulating himself as much as possible from the snow and the cold winds, and he wore fur-mittens and a sniper-mask. The white colour of his clothing blended in perfectly with the winter environment and the snow covered forests of Kollaa.

He preferred to work alone, being accustomed to stalking the deep forests on his own, and he knew to rely on his instincts. Patience was vital, as was leaving as little trace of his passage as possible. A hunter had to be cunning and precise in his actions. Carrying only a day’s worth of food and around 50 or 60 rounds with him, Häyhä relied on his knowledge of the wilderness to find a good spot from which he could establish his sniper’s nest. Once he found his position, he would build a little snow fort around himself to blend in with the environment. He placed his rifle on a snowbank that both stabilised his aim and prevented any snow being thrown up from the recoil, and waited for the enemy to march into his killing field. When Soviet soldiers, struggling and freezing in the snow, would cross his path, Häyhä put a handful of snow in his mouth to hide his breath…and then he pulled the trigger.

It is said that during his training in the army, he was able to hit a target 150m away, up to 16 times a minute. So now, the marching routes were full of dead Soviet soldiers who fell prey to the hidden marksman, without ever knowing what had hit them. Soviet positions were soon discovered deserted of the living, but packed with bodies, frozen in their last motions before being shot and killed. Sometimes they were found still standing up. In the sub-zero temperatures, even a minor wound was often fatal, as the weakened body would have a harder time surviving the elements.

Häyhä is believed to have not missed his target very often. In his short time at the front, his kill tally would rise to unprecedented levels. Hundreds fell to his rifle. So many, in fact, that his superiors did not believe the stories at first. According to records, just before Christmas, he killed 25 soldiers in just one day.

While many Finish and Soviet snipers used modern sniping rifles outfitted with telescopic lenses, Häyhä relied on the old fashioned iron sights. Not only did he feel that this gave him a better picture of his target, but more importantly, it would allow him to keep his head down lower, and in turn, lower his whole profile, making him harder to spot. Lenses could reflect the light and reveal his position, as was the case with many Soviet marksmen who were sent out to counter-snipe him, and instead met their fate with the help of his “outdated” rifle.

But Häyhä was also trained with the 9mm Suomi submachine gun, and depending on the fighting at hand, he also carried hand-grenades and a traditional puukko army knife as a last resort. As a sniper acting alone often beyond the frontline, Häyhä had to be careful, and often forfeited obvious targets if they would endanger his position.

The Soviets began beefing up their own counter-sniping activity, especially after Häyhä’s kill tally gained him both fame and infamy. If they suspected him of being somewhere, they would order artillery strikes in his general direction in the hope of finally neutralising him. There is even the story that a Soviet commander asked to be sent a famous Soviet sniper to eliminate Häyhä. After that sniper had killed several Finnish soldiers and officers, he waited for Häyhä to react and eventually show himself. He waited and waited, and as the sun went down, he decided to call it a day and was about to get up. That was when Häyhä shot him right through the head. Another story was that Soviet soldiers began carrying large iron shields into the field, to help guard them from sniper fire. The Finnish snipers like Häyhä were accurate enough that they simply shot them in the kneecaps.

Such stories began to circulate more and more, as Häyhä became famous to friends and foe alike. The Finnish propaganda portrayed him as a symbol that embodied the struggle of little defiant Finland, while the Soviet propaganda called him “belaya smert” – White Death.

The legend of White Death spoke of a ghost-like figure that was both everywhere and nowhere, creeping tirelessly through the woods. It spooked the Soviet soldiers and boosted Finnish morale.

On February 17, 1940, 80 days after the invasion, Simo Häyhä was officially proclaimed “a hero of Finland” by the Finnish government, and with hundreds of kills to his name, he was awarded the Kollaa Cross. He was promoted and gifted a custom made Sako M/28-30 rifle.

But despite the legend, Simo Häyhä was not invincible and was not a ghost. He was a man, just like any other Finn manning the defences. In early March 1940, as the winter receded, it became clear that though Finland had astonished the world by holding off the mighty Red Army, they could not hold out forever. The Soviets were learning; they were gathering more firepower and more competent leaders and tactics, and as the winter ended, so too did the Finnish advantage with the weather. No matter how valiantly they resisted, the numbers would eventually crush them.

On March 6, Häyhä was caught up in the middle of a renewed Soviet offensive against Kollaa. Fighting with the regular troops, Häyhä had again killed at least a dozen that day. An exploding bullet hit him in the jaw and ripped his lower face apart. Saved by his comrades, he was dragged out of the fighting and into hospital. He spent several days in coma, and when he awoke on March 13, peace had been signed. The war was over for both him and his country. For around 25,000 square miles of territory, the Soviets had paid a high price – most estimates of the Soviet dead are around 130,000, but it may actually have been as high as a quarter of a million dead men. Finland had “David and Goliathed” the USSR on a scale no one imagined possible, and Finnish independence had been saved.

What happened to Simo?

Simo Häyhä would bear the wounds to his face for the rest of his life, but otherwise, fully recovered. He couldn’t go back to his own home, though, which was now on the other side of the Soviet border, but he found a new home and lived a long, peaceful life until his death in 2002.

In later interviews, Häyhä repeatedly emphasised that during his service in the winter war, he simply did what he was told. But he was the best at it. In not even 100 days, his official score was 505 kills, making him the most successful sniper in history. That’s just the official tally; unofficially it was higher.

Of course, those numbers will always be debatable. Such is the nature of war. But the legend of White Death is very much alive today, and not just in Finland. When asked what it was that made him such a great sniper, Häyhä simply answered: “Practice.”

Simo Häyhä’s incredible story heavily inspired our song ‘ White Death ‘, which is featured on our album, Coat of Arms. Take a look at the lyrics we wrote here.

If you’re interested in a more visual interpretation of the above story, watch our Sabaton History episode, White Death – Finnish Sniper Simo Häyhä: