Adrian Paul Ghislain Carton de Wiart was born in 1880 in Brussels, Belgium, to a family with substantial connections.

One cousin was a former Prime Minister, the other a political secretary to the King. It was even rumoured that de Wiart was the illegitimate son of Leopold II. His father, who practiced international law in Egypt, hoped that his son would follow in his footsteps, but de Wiart had different plans. After he failed his Law Preliminaries at Oxford, he chose to enlist, to live life “rough and tough and full of bitter experiences.”

De Wiart didn’t really care for what he fought or even for whom. In his romanticised vision of war, he considered serving the British Empire or perhaps in the French Foreign Legion, or even fighting for the Boers against the British in South Africa. This ambivalence was caused by his rather youthful ignorance when it came to world politics. “I know that the ideal soldier is the man who fights for his country because it is fighting, and for no other reason. Causes, politics and ideologies are better left to the historians.”

Adrian first fought with the British against the Boers in South Africa, as it turned out. Because he was still underage and a foreigner, de Wiart enlisted with a fake identity. The British recruiter didn’t look twice and assigned him to a yeomanry regiment. Arriving in South Africa, de Wiart got a first glimpse of what modern war was like. A group of entrenched enemies behind a fence of barbed wire proved almost impossible to dislodge. De Wiart volunteered to dash forward to remove said wire, and his more level-headed colonel denied the request, called him a fool, and most likely saved his life. Broodingly, de Wiart conceded. “War was still eluding me, and my vivid imaginings of charging Boers single-handed and dying gloriously with a couple of posthumous VCs were becoming a little hazy.”

His wish to die in battle was nearly answered when he received a bad stomach wound and a bullet straight through his groin. De Wiart respectfully admitted that the Boers were indeed very good shots. He would survive, but his identity was revealed, which got him sent back to England. Although his peers at Oxford celebrated him as something of a hero, Carton thought that it was “not possible for anyone to have had a duller dose of war, and [he] returned bereft of glory.” 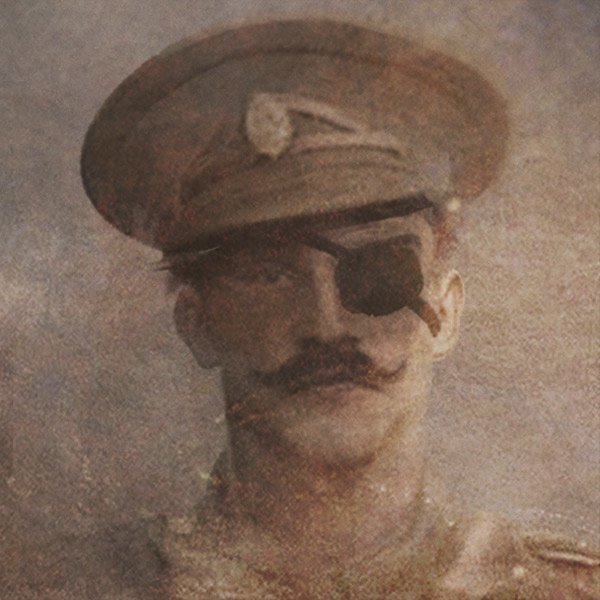 With a strong desire to experience the excitement of war, de Wiart decided to continue his adventures with the British Army.

On July 23, 1914, he boarded a ship bound to fight the rebels in British Somaliland – just a few days before Europe exploded into the Great War. The irony was not lost on him.

“It seems extraordinary to think of my utter ignorance of world affairs, but at that, even then, pregnant moment I fondly imagined I should be one of the few people to see a shot fired in anger, and I could hardly believe my ears when at Brindisi or Malta we heard that Germany and Russia were at war. And my cup of misery overflowed when on arrival at Aden I learned that England also had declared war on Germany.”

Stuck in a sideshow to the great conflict, his war was now against the “Mad-Mullah”, Mohammed Adbulla Hassan, who challenged British rule with the support of his Dervishes. De Wiart fought together with Indian and Somali troops to quell the rebellion. In November 1914, by a well-fortified blockhouse, de Wiart and the Somalis advanced as far as they could – close enough that he could touch the Dervishes’ rifles in the loopholes with his walking stick. Trying to get another glimpse of the defences, de Wiart was hit, and a splinter buried itself in his eye. A few moments later, another bullet exploded, hitting the same eye. Although he was basically blind with pain at this point, he refused surgery, knowing that it was his one chance to get back to Europe, “eye or no eye.” His plan worked – he was sent back to England, and on January 3, 1915, his eye was removed.

De Wiart’s request to fight in Flanders in the Great War was easily granted, as everyone was in dire need of experienced officers by then.

The only problem was his wound. British High Command “did not wish the Germans to think that [they] were reduced to sending out one-eyed officers.” After agreeing to wear a glass eye, he got his papers signed, but then tossed the “startling, excessively uncomfortable glass eye” out of the window of his taxi and replaced it with a black eye-patch. This soon became his signature.

De Wiart found that fighting in Somaliland was nothing compared to this war. Curious more than anything, de Wiart made his way to the frontline, as the shelling increased.

“I was standing next to my second in command wondering what to do, when he said “I wish you’d duck when those shells come.” I was on the point of telling him that I was a fatalist and believed in the appointed hour, when we heard another shell coming and he ducked. The shell burst quite near us and I was thrown some distance. I picked myself up, and started to move my men, when I noticed a hand on the ground. The hand was encased in a special kind of leather glove, which I recognised instantly as that worn by my second in command. His body was thirty or forty yards away.”

De Wiart continued along the bombed-out Menin Road, but when they passed some dead Germans, he thought something was off. There had been no reports of the enemy breaking through in the region, but before he could finish the thought, the silence was broken by a torrent of German fire. De Wiart found himself flat on the ground in a pool of blood. His hand was a damaged, gory mess. He got up and ran like hell through the storm of bullets back to the lines.

“My hand was a ghastly sight; two of the fingers hanging by a bit of skin, all the palm was shot away and most of the wrist. For the first time, and certainly the last, I had been wearing a wrist-watch, and it had been blown into the remains of my wrist. I asked the doctor to take my fingers off; he refused, so I pulled them off myself and felt absolutely no pain in doing it.”

By December 1915, de Wiart was sick of the surgeons trying to save his hand and had it cut off.

After his health returned, it was back to the war. With one eye and one hand, he attached himself to the infantry. Fighting in the trenches made de Wiart realise just how important the role model of the well behaved and disciplined officer truly was. His own deeds could make or break morale within a regiment. Even if it meant exposing himself to great danger – an invisible commander was not a source of inspiration. At the same time however, it made de Wiart a pitiless and unforgiving man, who valued duty over personal fears. 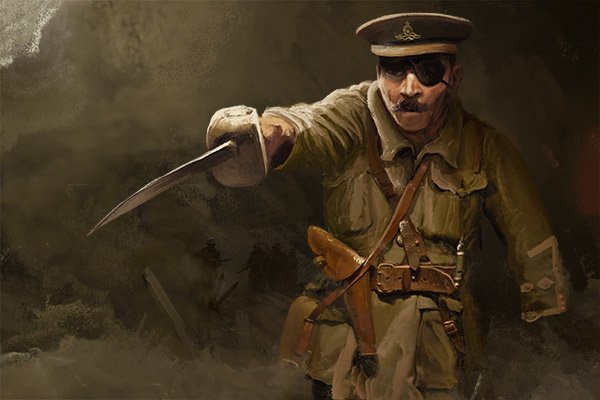 “I was looking round our trenches when I saw a man who was certainly not going forward. I asked him the reason for his dawdling, and he replied that he had been wounded three or four times already, and simply couldn’t face it. I told him I had been hit oftener than he had but still had to face it, and to give a little point to my argument I gave him a push in the right direction, and on he went. (…) I never carried a revolver, being afraid that if I lost my temper I might use it against my own people, so my only weapon was a walking stick.”

In time for the Battle of the Somme, de Wiart was to attack La Boisselle, one of the strongest German positions. On the morning of July 3, 1916, he led his men. As de Wiart described it: “dead everywhere, not a house standing, flattened as if the very soul had been blasted out of the earth and turned into a void.” By nightfall, nearly all of de Wiart’s accompanying officers were either dead or wounded, and he found himself in “a most unhealthy spot and a magnet for shells of every size.” He was suddenly knocked to the ground. Bleeding profusely, he checked his body and found that the whole back of his head had been blown off by a machine-gun bullet. Luckily, it had missed all the vital parts, but once more, he was brought to the dressing station.

After three weeks in the hospital, and receiving the Victoria Cross for his actions, he was once more back at the front.

During the battles of Arras and Passchendaele in 1917, de Wiart could see how the British Army had progressed. Now it was their artillery that dominated the battlefields and shells were available in abundance. But that didn’t mean that he was out of danger. Once more, de Wiart found himself caught in a German barrage. His clothes blown into his hip by an exploding shell. The wound went septic, yet de Wiart pulled through. By now, not only his doctors but also the General Staff urged him not to return to the frontlines. Only de Wiart’s personal appeal to General Hubert Gough got him back to the front, just in time for the German Spring Offensive of 1918.

The Kaiserschlacht badly mauled the British, but the front held. Thanks to de Wiart’s ‘magnetic personality’, he found himself once more in the middle of heavy fighting, when a large piece of shrapnel buried itself in his hip, very nearly costing him his leg. Returning to hospital for surgery, de Wiart found out that his fame as the unkillable soldier had spread.

“I was lying on a stretcher feeling extremely bad-tempered and disgusted with my last brief stay in France, when a well-meaning clergyman came up to me. Seeing the disgruntled expression on my face and my one eye, he told me to cheer up, as it might have been much worse; he said he had such a cheerful follow through his hands a few months earlier, a man who had lost both an eye and an arm. I asked him the man’s name and he said “General Carton de Wiart,” and seemed quite hurt when I lost interest in the conversation.”

Once more, de Wiart returned to the war in October, but this time only to witness its conclusion.

“The Armistice brought a momentary thrill of victory which soon faded. I think only the civilians get any real joy out of the end of a war, and the release from the strain of eternal waiting … Frankly, I had enjoyed the war…”

With the war ending and the men going home, de Wiart wondered what peace would have to offer for him. But the adventures of Carton de Wiart were far from over. After the armistice, he was part of the British Mission to Poland, soon at war with Bolshevik Russia. In Poland, he would also see the beginning of the Second World War. He then fought in Norway and Yugoslavia, was a Prisoner of War in Italy, and was later sent to China.

If you’re interested in a more visual interpretation of this story, watch our Sabaton History episode, The Unkillable Soldier – Adrian Carton de Wiart: