The Great Northern War had been undecided for several years. Tsar Peter I had envisioned that the future of his coming Russian Empire would rely on a presence in the Baltics and access to the seas. So back in 1700, he had forged an alliance with Saxony and Denmark-Norway to challenge the mighty Swedish Empire and had established St. Petersburg – which he named after himself – in 1703 on the site of a captured Swedish fortress as his ‘window to Europe’.

Although Peter’s forces had been trounced by the Swedes at the Battle of Narva, Swedish King Charles XII (also known as Carolus Rex) had hesitated to follow up on his success and throw the Russians out of the Baltics. It was not until 1707-1708, after he had spent a lot of time meddling with Polish-Lithuanian politics, that Charles swung his focus back against the Russian threat to his empire. The perfect moment had long passed but the Swedish war machine was still mighty, especially with the military genius that was the Charles XII at its head.

He did not choose the strategically safer route by advancing on St. Petersburg, but instead would direct his small but professional army to strike directly at the heart of Russia. By capturing Moscow, Charles hoped to end the war in one fell swoop and achieve something that people would remember for centuries to come. Although such a daring plan should have required months of planning and preparation, Charles, never known for his patience, immediately broke camp and made for Minsk and then the Dnieper River.

A close eye on Carolus Rex

Naturally, Tsar Peter watched Charles’ every move. Peter had a Russian contingent of more than 70,000 men at hand, technically enough to challenge Charles’ 40,000 strong host, but Peter knew all too well after Narva, that relying on numbers alone was folly against the veteran Swedish soldiers. So, shadowing the blue army, Peter ordered his troops to engage in a scorched earth policy.

Every village in the path of the Swedish host was to be destroyed and fields were to be burned, so the Swedes would find neither shelter nor food. Charles hoped to eventually bring the Russians to a decisive battle where he could crush them in the open, but Peter did not want to risk a pitched battle. Instead, the Russian troops fortified the banks along the great rivers and contested every attempted river crossing. The quality of the Swedish troops and Charles’ tactical skill overcame those smaller battles, but each engagement thinned his lines. Where the Tsar could easily replace 3,000 men, the Swedes were hurt by losing 1,000.

In July 1708, though, they finally reached the town of Mogilev on the Dnieper, and as the later summer wore on, they marched in long lines through the wilderness, as supplies dwindled and exhaustion set in. Day and night, they were forced to remain on guard against Tartar and Bashkir horsemen who cut down any stragglers. The Swedish army grew wearier and hungrier, but their unshaken belief in their king and his vision kept them on track. Even Charles could see that a crisis was developing, so he sent a message back to Riga to General Lewenhaupt, asking for fresh supplies and some reinforcements. But when his officers began urging their King to pull back to the Dnieper and wait for the supplies to arrive, this brought the feeling of ‘retreating’ to Charles’ proud mind, and he just stopped listening. Instead, he opted for an alternative.

Back in Mogilev, Charles had received a message from Ivan Stefanovic Mazeppa – chief- of the Ukrainian Cossacks. A fascinating historical character, Mazeppa once served at the Polish court, but after being caught having an affair with the wife of a Polish nobleman, he was tarred and feathered and tied to a horse bound for the open steppe. There, he was taken in by the Cossacks, proud and fearsome tribes that ruled the borderlands between the great powers in the east. The exiled Mazeppa impressed the Cossacks so much that he eventually rose to the rank of Hetman. Usually, the Cossacks fought in the service of the Tsars against the Turks, but Mazeppa spoke for those that wanted independence and their own realm. For this, he had secretly negotiated with Charles and offered a force of 30,000 horsemen to fight the Tsar. This tempting offer now made Charles turn south to meet Mazeppa, completely abandoning his reinforcements. Poor Lewenhaupt soon found himself abandoned on the banks of the Dnieper with no trace of his King.

Charles and Mazeppa met in Severia, a rough, unruly country between Poland-Lithuania and Russia in what is now Ukraine. However, instead of the promised 30,000 horsemen, Mazeppa only had around 1,500 with him. Peter had found out about Mazeppa’s double-dealings, and a Russian army had just besieged and destroyed his capital. Mazeppa was ostracised and excommunicated, and no longer held power among the Cossacks. Sturdy Lewenhaupt eventually made it to Severia, but only with a fraction of his men, and had also been forced to ditch ammunition and artillery while fleeing from the Russians, who had been hard on his heels.

Now left with neither a large host of Cossacks or a large host of Swedish reinforcements, Charles set up camp with around 24,000 men in the woods with winter around the corner – a winter that was one of the harshest on record. Whole parts of Europe froze, frostbite in the Swedish camp was widespread, and many men froze to death in their sleep. His officers still hoped to convince their king to return to Poland, but Charles wanted to move on as soon as the thaws of spring had arrived. He had made the decision to march against the fortress of Pultawa.

The siege kicks off

The siege began in May 1709, but the Swedes, with little artillery and powder left, were clearly not strong enough to take the fortress head on. Charles exposed himself to danger time and time again, constantly urging his men onwards, and one day, as he was riding outside the fortress with Lewenhaupt, the King was hit by a bullet. The projectile punched straight through his foot, crushing its bones. It was feared that he might even lose his foot, though he did not.

Things went from bad to worse, as Tsar Peter arrived at the scene at the head of 90,000 men. With the king out of the fight, command was up to marshal Rehnskiöld. Charles ordered him to order the attack in his stead, so with only 13,000 men available and only a handful of cannons left, the Swedes were to attack the strongly fortified Russian camp opposite them. A surprise attack seemed like the only option for success, but even if the King had personally been leading his troops, the long trail through Russia had left the Swedish army exhausted and under-supplied. They would have to pull off the impossible.

On June 28, shortly after midnight, the Swedish troops advanced towards the enemy’s lines. The battlefield was like a long corridor. On its flanks, the Russians had fortified the woods and Charles’ plan was to quickly overrun the redoubts in between in a speedy surprise attack. If they managed to capture most of the artillery batteries early on, they could turn them against their enemy. However, as the vanguard began slowly moving through the cover of darkness, they were spotted by a Russian patrol. A pistol shot echoing through the night awoke the Russian defenders and spoiled the surprise. Regardless, the attack went off well; the Swedes were formidable soldiers.

A mad dash by the Swedish cavalry captured Russian field batteries in the centre. Under the cover of their own canons, the whole Swedish force advanced. Lewenhaupt’s infantry pressed the centre and overtook the first redoubts with relative ease, as the Swedish cavalry on their left flank successfully attacked and routed the Russian cavalry. However, as the advance continued to exploit the breakthroughs, an order reached them to stop.

To this day, historians don’t really know who exactly gave the order to halt in the middle of a promising attack, but the King was soon brought up in a litter. Rehnskjöld seemed close to a nervous breakdown and the King explained nothing. With the opportunity gone, the pause gave the Russians enough time to react and reorganise, and Peter could now clearly see how few the Swedes actually were. As the King finally ordered the attack to continue, the Russians counterattacked.

In the end it came down to 4,000 tired and exhausted Swedes to fight over 30,000 Russian troops and 100 cannons in entrenched positions head on. Still true to their oath and their belief in the King, the ‘blue boys’ went on with the attack. It was a gallant, though tragic rush into certain death. 2,000 Swedes lay dead on the ground before the rest finally stormed into the Russian lines with swords and halberds. None returned. 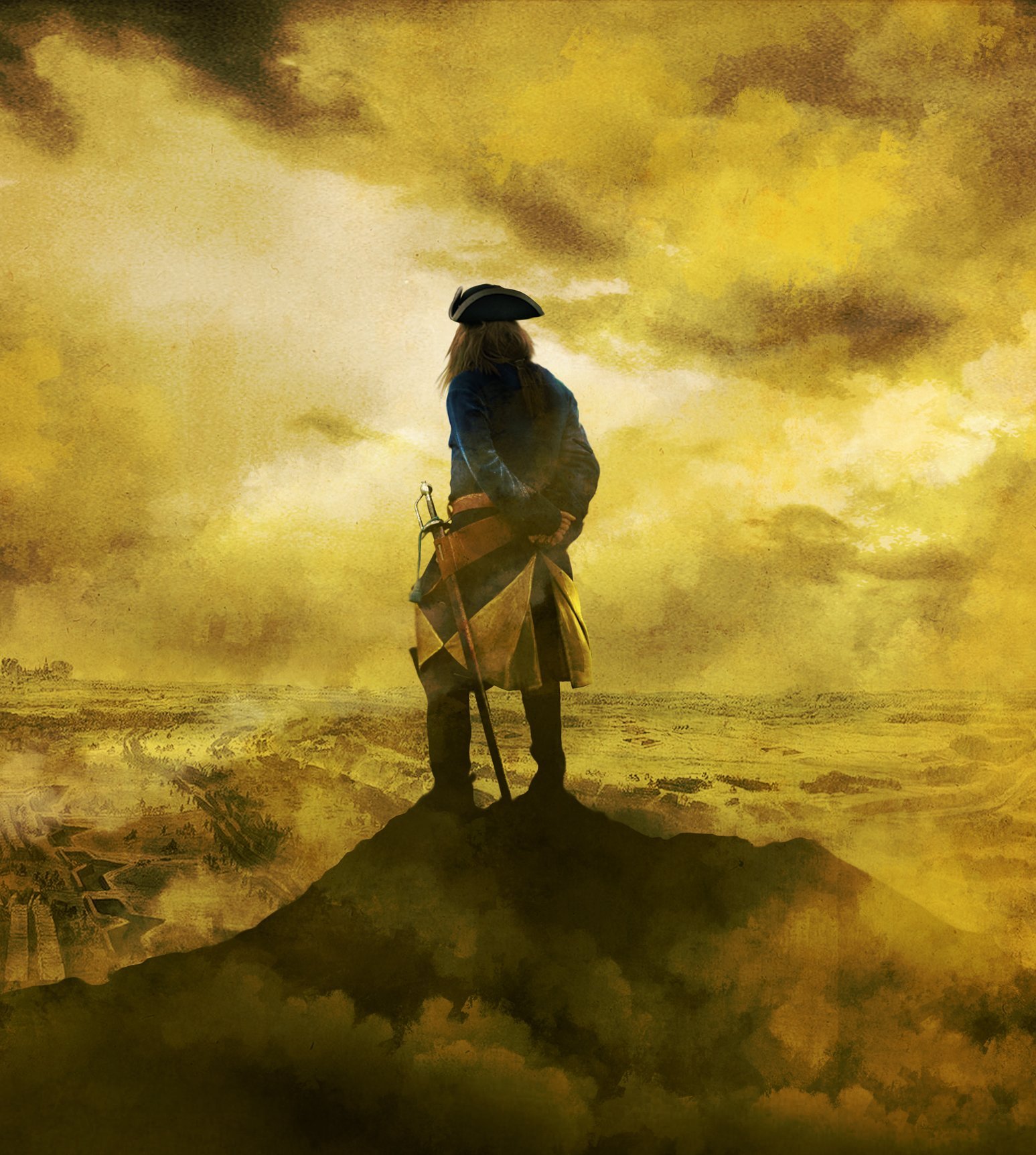 Charles himself lay bleeding on the ground, as a cannonball had destroyed his litter and killed 21 out of his 24 orderlies. Loyal Lewenhaupt rushed in to rescue his king. It was a narrow escape, and many officers paid with their lives, trying to bring the king to safety. Tragically, even Lewenhaupt, who was rallying the last men standing to guard the rear to buy some time for the flight, had to finally surrender to the Russians. Peter himself came to the imprisoned officers and asked: “Say, where is my brother Charles?”

To Peter’s disappointment, Charles had survived, and with a few hundred men at his side, had escaped south into Turkish territory. His army however, arguably the best fighting force on earth at the time, had vanished. Swallowed up by the Russian countryside and defeated by their enemy.

Our song, ‘Poltava‘, which is featured on our Carolus Rex album, was written about The Battle of Poltava. Take a look at the lyrics we wrote here.

If you prefer a visual interpretation of this story, watch our Sabaton History episode Poltava – The Great Northern War: