From 1979-1989 a conflict known as the Soviet-Afghan War was underway in the fields and mountains of Afghanistan. Rebel groups, known collectively as the Mujahideen, who were backed by the USA, Saudi Arabia and Pakistan, were waging a guerrilla war against the ruling communist government of Afghanistan, who had seized power following a coup in 1978.

The country proceeded to enter a state of near civil war. The new communist president Nur Mohamad Taraki was murdered by his rival Hafizullah Amin, who assumed the presidency. At this point the Soviet Union stepped in and deployed the 40th Army, which entered Kabul, killed Amin and appointed a Soviet loyalist to take his place.

The action is described as either an “invasion” or an “intervention”, depending on which side of the communist debate the commentator is on. With the US and the Soviet Union supporting rebels and government respectively, the conflict is often described as a proxy for the Cold War. In the 10 years of fighting, hundreds of thousands of civilians were killed and millions fled as refugees, mostly to neighbouring Pakistan and Iran.

The Soviet engagement in Afghanistan was nearing its end in 1987. Since the coup, they had been keeping the pro-Soviet government of the Democratic Republic of Afghanistan in control of the country. The Soviet Army had never planned on a long-term occupation, they just wanted to beat the Afghan insurgents into submission until the Afghanistan could stand on its own two feet. Neither had happened. The Soviets could only win short term tactical victories. They could beat the rebels, they could kill them in the open, but they could not keep them from becoming rebels in the first place. More and more money, men and material disappeared in the quagmire, but the situation in Afghanistan was unsalvageable. Withdrawal was the only sound solution.

Afghanistan was far from being a unified nation state. Outside of Kabul and the other bigger cities, people lived in the old ways. Local feudalistic and Islamic traditions prevailed, and they collided with the autocratic Soviet system. Warlords were united in their hatred of the Soviet occupiers and their sponsored president Mohammad Najibullah, so for nearly 10 years the Mujahideen, the Muslim warriors, fought a relentless guerrilla war against the that occupation.  Led by influential leaders such as Jalaluddin Haqqani or Osama bin Laden, the Mujahideen were well organised and moved around the wide mountain ranges of Afghanistan with a large system of caves and hidden trails. Thanks to Pakistan and other sympathetic countries, they were outfitted with AK-47s, Lee-Enfield rifles, anti-tank mines and rocket-launchers.

But while the Soviets were now set on withdrawing their forces, Mohammad Najibullah was getting nervous about the future of his government. To stay in power, the Afghan president required a symbolic victory – one that would show the guerrilla forces that he was in control.  Now, large parts of Afghanistan were connected by single paths, many of them ancient, which led through the steep-sided mountains, often for dozens of kilometres. One such route, the Satukandav Pass, ran from Kabul towards the city of Gardez and Khos in the province of Paktia.  Since 1981, it had been under the control of the Mujahideen, so most of Paktia was cut off from ground traffic and the Soviets had been forced to supply their forces there by air. This was of course not only very expensive, but by the late 1980s, the Mujahideen were increasingly equipped with surface to air missiles, like the US-made FIM-92 Stinger.

A plan was made to wrest control from the Mujahideen. Operation “Magistral”, or “Highway”, was to reopen Satukandav Pass for traffic once more. On November 19, 1987, Soviet airborne units and special forces were airlifted into the mountains and swept the guerrilla forces from their positions in a well-coordinated attack. Such units had proven particularly effective at fighting in hostile and inhospitable terrain. They adapted quickly, and fighting in Afghanistan favoured smaller, but well trained and equipped units, for which the regular motor-rifle divisions were unsuited.

The men of the 345th Independent Guards Airborne Regiment were ordered to occupy the heights in the south-west of the route, near Sarani. The 345 was a veteran unit. From the very beginning of hostilities, they had been involved in numerous operations, leading raids deep into the countryside. Brought in by gunships, they set out to ambush the Mujahideen supply routes with aggressive and imaginative tactics. Now they were spread out thinly over the mountain tops.  The 39 paratroopers of the 9th company were sent to Hill 3234. This hill, named after its height in metres, which is over 10,000 feet, was a commanding position that had to be held if the Pass was to be controlled. Most of 345’s men at this point were not even 20 years old, but although conscripted from all over the Soviet Union, the paratroopers had undergone special mountain-combat training in the Uzbek ASSR. That experience was now crucial in the brutal Afghan winter and the extreme elevation. In the evening of December 31, under command of Senior-Lieutenant Sergei Tkachyov, the 9th company established camp on Hill 3234.

Already though, the Mujahideen, who had crossed the border to Pakistan, were re-infiltrating, making their way to the mountain pass. Key to the Soviet defines were two things: the radio control station that kept contact with the Soviet artillery and the 12.7 mm NSV heavy machine gun on the highest point of the mountain. The approaches to the hill were heavily mined, leaving only two routes for reinforcements open. The paratroopers had two PKM light machine guns, a grenade launcher and a couple of rocket-launchers, but due to the nature of mountain warfare, had only limited fields of fire. Also, the ground was frozen solid, so digging trenches was out of the equation. Instead, the men built waist-high walls of loose drystone, called “kladki”.  These were deemed good enough to withstand the occasional small arms fire and sporadic shelling from the enemy.

The Gardez-Khost route was now officially open for traffic for the first time since 1981. For a few days the paratroopers of 345 were shelled and sniped at on a daily basis, but nothing out of the ordinary. However, on January 7, Orthodox Christmas Day, the shelling suddenly intensified.  A massive artillery barrage rocked the mountain. It was immediately clear that this was not part of the regular harassing attacks. Several hundred mortar rounds and rockets crashed into the Soviet encampment, showering the area with shrapnel and destroying much of the kladki walls. 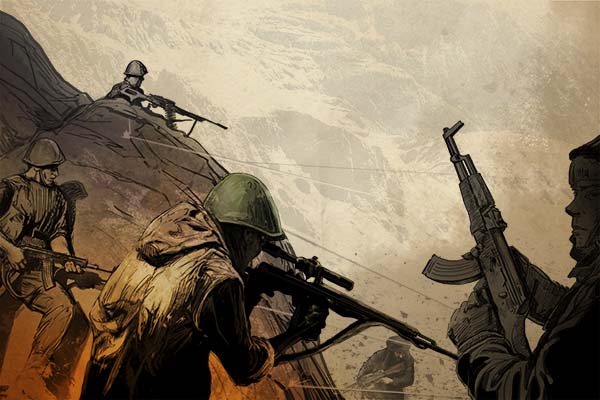 At 15:30 the camp was suddenly struck by rocket attacks from three sides. From the south, groups of fighters advanced in the wake. The Mujahideen rushed from cover to cover and got within 200 metres of the outpost before they were spotted. The NSV heavy machine-gun opened fire at once, tearing into the attackers. The quick thinking artillery spotter called in artillery support and it silenced many of the Mujahideen rocket launchers, but that brought only a short respite.

At 16:10, another bombardment rained down on the Soviet position. This time the guerrillas advanced from two directions, the strongest attack coming from the north. The Soviet commander noticed that this was unusually well coordinated – for years, the Mujahideen had relied on hit and run tactics, but now they were seen with walkie-talkies. Like regular trained soldiers, the rebels waited until the barrage forced the paratroopers to take cover before they advanced, and separate groups covered each other with suppressing fire. Bundles of hand-grenades bounced against the kladkis and many defenders were wounded by shrapnel and stone fragments. The whole mountain top became engulfed in the chaos of combat, as the noise of grenades, gunfire and exploding mines drowned everything else out.

The attacks now concentrated on the 12.7 mm gun. Placed in the centre, the gunner was able to shoot in all directions, but was also vulnerable to the enemy. Rockets and hand-grenades targeted the gun, and some RPGs were fired from such a close range that they bounced off the gun without exploding. Still, the machine-gunner held on, firing a continuous stream into the enemy until shrapnel finally cut him and his gun down.

At 17:35, another attack began. With the heavy machine gun destroyed, the Mujahideen made an all-out attack from three directions. Soviet artillery crashed into the attackers once more, but it was now dangerously close to their own position. The guerrillas came close, shouting at the Soviets to surrender, but this was not the kind of war where you’d want to become a prisoner.

At 19:10, the situation grew desperate. Casualties were heavy and ammunition was running low.  Fighting was so intense that a whole box of ammunition lasted maybe 15 minutes. The men fired their guns at close range – others were even locked into hand to hand combat, fighting with bayonets and knives. Again, the enemy was repulsed.

As night began to fall, the paratroopers were down to just a magazine or two and there were no grenades left. They had radioed to base repeatedly that they were in desperate need of supplies, but high command responded that it was too dangerous to send in helicopters. 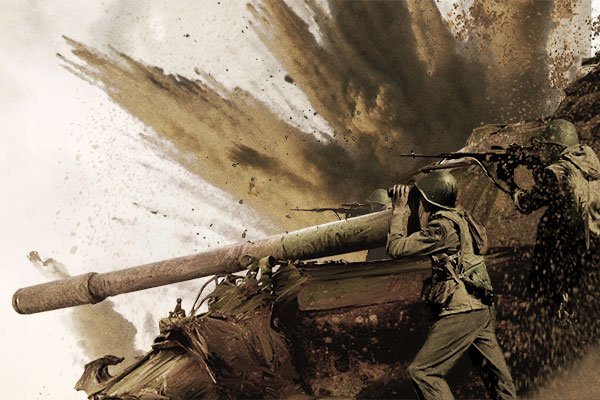 The only help in immediate range was the deputy chief of the political department, further down in the valley. He had just a few men from maintenance as well as reconnaissance personnel with him, but he immediately ordered them to the mountain. The column of armoured vehicles made its way through the night, until the route became impassable and the men dismounted. Burdened with 45 kilos of supplies and ammunition, each man struggled up the hill. They knew that the paratroopers were in a desperate situation and that reaching them was a matter of life and death.

The men on the mountain top had been now under attack for 12 hours but all through the night, the Mujahideen did not let up. The defenders were firing only single shots, there was not enough ammunition left to fire in bursts. Every bullet must count. Meanwhile, the support personnel advanced up the mountain. The approach was so steep, that it took them two and a half hours. In the end, the Mujahideen were unable to break the position. It was close, but the arrival of the supply column had saved the day.

The intensity of the attack caused a lot of speculation. It was the first time in the war that the Soviets had encountered such a concentrated and well executed attack. Some of the paratroopers said they had seen men in black uniforms and turbans. Rumours circulated of Pakistani special forces that supported the rebels and were even airlifted into Afghanistan, but this could never be proven.

Of the 39 paratroopers, six men had been killed and 28 wounded, some seriously. Three men were awarded the Hero of the Soviet Union, two posthumously. The others were awarded the Order of the Red Banner or the Order of the Red Star. It is unknown exactly how many Mujahideen had been killed, since they took all their dead and wounded from the battlefield as they retreated, but the Soviets said they numbered over 100.

The victory was, however, short lived. Like all of Operation Magistral, the battle for Hill 3234 was a tactical success and the Gardez-Khost route would remain open, but only for a few weeks.  After the Soviets withdrew their forces, the Afghan army was unable to hold it. By the end of January 1988, the Mujahideen returned and recaptured the area. It was analogous to the whole war. A short lived victory, that meant little to nothing in the end.

The stirring story of The Battle for Hill 3234 inspired our song, ‘Hill 3234’. Take a look at the lyrics we wrote here.

If you prefer a visual representation of this story, watch our Sabaton History episode, Hill 3234 – The Soviet-Afghan War.