The Battle of Belleau Wood begins

The US Marines had been training for fighting the Great War in France since the US declaration of war on Germany on April 6, 1917. They were a rather small force, not even 14,000 men strong, but the US Marine Corps could look back on a long and proud history of service. The ‘Soldiers of Land and Sea’ had served US interests overseas in places like the Philippines, Haiti and even the coasts of China. But now, they were sent out to fight in a global war of which the US had only been a passive spectator, and their enemies were not poorly equipped insurgents, but battle-hardened soldiers who’d seen years of active combat.

To prepare themselves for modern war, the Marine Corps had included mostly French battle doctrines in their training. Especially the new French emphasis on move-and-fire tactics, but with the Marine Corps preference of the smaller platoon formation. Equipped with rifles, light support artillery and machine guns, and rifle grenades, the Marines soon looked like a modern fighting force.

They did not just simply copy French doctrines, though, but put heavy emphasis on traditional soldiery as well. True to their credo: “Every marine a rifleman”, the Corps constantly honed its skills on the shooting range with the standard Springfield rifle and trained for close combat with the bayonet. Two skills that, while not left behind in the Great War, took a backseat to others in terms of general 1918 combat, where the machine gun and the hand grenade were thought of as the tools of the infantryman.

In early 1918, the huge German Spring Offensives, ‘The Kaiserschlacht’, had smashed into and through the Allied lines in Belgium and France, and as their ‘Operation Blucher’ kicked off in late May, the Germans were soon less than 50 miles from Paris.

Panic spread, even though the offensive was very clearly running out of steam, and the Allies urged the Americans to send in reinforcements. The Marines, as part of the 2nd American Division, were among those first reinforcements that were judged ready to be sent into action. Operation Blucher had created a large salient across the Aisne River and into the French frontlines from Reims to Soissons, and the German army was trying to get a hold on strategically valuable positions from which to launch further attacks. Such a position was Belleau Wood.

Retreat is not an option

The first elements of the 5th Marine Regiment were rushed into the lines on June 2, 1918. They were greeted by exhausted French soldiers, who suggested the Marines follow their retreat, to which Captain Lloyd Williams only retorted: “Retreat? Hell, we just got here!”

The French were by no means broken, but they had taken a hard hit and the Americans had to take the defensive lead. The next day, as the Germans advanced from Belleau Wood over an open wheat field, they were unexpectedly met by highly accurate rifle fire and cut down in large numbers, before hastily retreating back into the woods.

The German positions within Belleau Wood overlooked a wide-open area and the small town of Belleau itself and its surroundings, and if an Allied counterattack was to successfully eliminate the German salient and drive them back over the Aisne, their positions in Belleau Wood had to be taken.

The next day, June 3, the Marines formed up in ‘light order’ and marched over the same wheat field towards the woods to take it by storm. As they marched out into the open, they were suddenly hit by rifle and machine gun fire. Taking heavy casualties, the advance was quickly halted, and the survivors pulled back. Clearly, the Americans were still green and they had to learn – fast!

The Germans opposing them were veterans of the IV Reservekorps. Their commander was Major Josef Bischoff, a career soldier who had fought in the German Africa mission and was himself an experienced bush fighter. Although his men were suffering from exhaustion and chronic shortages of ammunition and food, he was determined to put his experience to good use in the thick of the woods, and carefully prepared their defences. Thick undergrowths of bushes and large boulders were ideal hiding spots, and the steep ravines and hills slowed down every advance. So while it was really hard to maintain an attacking formation, it was also difficult to maintain a static line of defence. Belleau Wood was a place of small unit fighting. 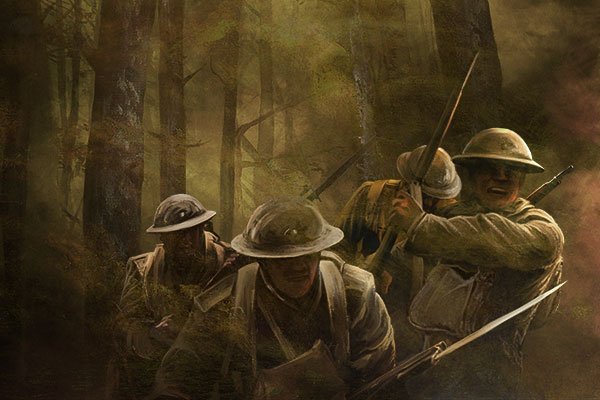 To break into Belleau Wood, the Marines had to take the high ground and the villages outside the woods first. While French artillery blasted Belleau Wood into an even more unmanoeuvrable maze, the men of the 5th Marines went into battle once again.

On June 6, they advanced towards the German positions on Hill 142, a major strong-point that overlooked large parts of the woods. Again, they were met by entrenched machine guns and took heavy casualties in brutal fighting, especially after the German counterattack smashed into their advance. But the Marines prevailed. The hill was strewn with mutilated bodies from both sides, but it demonstrated that the Marines were not shaken by the effects of battle.

On June 11, another major attack began. While other marine companies attacked from the north and south, the main force was again ordered to advance over the open wheat field. This time though, they had the help of a heavy ground fog that shrouded the advancing Marines from the eyes of the German outposts until they were already on top of them. Bayonets first, the Marines stormed into the German trench lines, attacking at close range. In those woods, the men were cut off. The heavy fog made flare guns ineffective and telephone lines were already cut by the shelling. Only cold steel and personal bravery would prevail.

The Americans were victorious in rolling up the forward defences, but the Germans were not done yet. Vanishing in the bushes, they retreated to new defences. The initial rush had cost the Marines dearly, and during the night they were suddenly hit by 7,000 mustard gas shells, saturating their surroundings with deadly toxins.

Still, they were determined to push on, NCOs leading the small platoons. Machine gun nests were stormed by all or nothing bayonet charges. Grenades exploded among trees and rocks, sending deadly splinters flying through the chaos of battle, and snipers targeted them from the treetops, but still, the Marines kept up their momentum.

Their aggression was their best asset in those dense woods. More than once they pushed through the German lines, then rolled up their defences from the rear. In the spirit of Dan Daly, who just days before had spurred on his fellow marines with the words “Come on you sons of bitches! Do you want to live forever?” the marines surged forward. Few prisoners were taken in these days of the war, if any. It was merciless ‘you or me’ close range fighting, with no room for quarter.

Closing in on the Germans

After days of combat, the Germans had lost significant chunks of ground and finally broke on the evening of June 24. They fled to their last fortified positions near the edge woods. The Marines, though, had to stop as well. Despite their success, the casualties had been high, and thousands of marines were either dead or wounded, among them Captain Williams, who had succumbed to gas and shrapnel wounds. It was now up to the heavy artillery to soften up the enemy first, before the final attack could drive them from the woods. 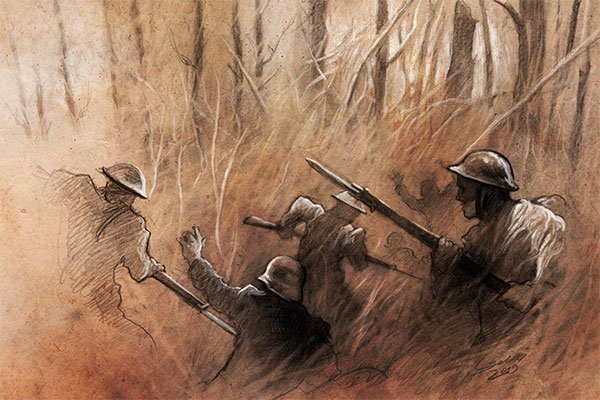 After a night of heavy shelling, the marines moved out. They were again met with heavy machine gun and sniper fire, but after a few hours of heavy fighting, the battle was pretty much over. Ever more exhausted and demoralised Germans surrendered without a fight, and whole companies were captured by single men. By midday on June 26, after 25 days of fighting, the last Germans in the woods were killed or captured. The report to American headquarters read ‘Woods now US Marine Corps entirely’.

The fighting for Belleau Wood became an instant PR hit in the American media. Ecstatic newspaper headlines ran on how the Marines saved Paris and of how the vicious ‘Devil Dogs’, as they were called, were feared by the Germans.

Belleau Wood was in many ways the birthplace of the modern USMC and the name Devil Dogs stuck, after the heavy fighting of those June days in 1918.

The Marines had taken the fight to the enemy and were ready and willing to accept heavy casualties to achieve victory. The ferociousness of the attack was a real contributor that summer to the breakdown of the morale of the Germans, who had erroneously thought of the Americans as incompetent farmers and cowboys that did not know how to fight. They were very much mistaken.

The story of the Battle of Belleau inspired us to write our song, ‘Devil Dogs‘, featured on our album The Great War. Take a look at the lyrics we wrote here.

If you prefer a visual interpretation of this story, watch our Sabaton History episode, Devil Dogs – U.S. Marines: