The Battle of Flers-Courcelette begins

The Future of Warfare

In the fall of 1914 during the Great War, the Western Front had ground to a halt. The race to the sea, an attempt by both sides to outflank the enemy, had failed, and the great armies of Europe, stunned by the appalling numbers of casualties taken in such a short time, dug in.

It was clear to everyone that the old conventions of warfare simply weren’t effective anymore. The destructive power of the machine gun, entrenched behind a belt of barbed wire, firing down a blasted, shell-hole scarred no-man’s land, had set the limits to traditional manoeuvre warfare. Men and horses, which, for thousands of years were the tools of warfare, were now outmatched by technology, and a simple question arose in the warring countries: What now?

To find an answer, politicians, military thinkers, industrialists and professors all came forward with various suggestions and potential solutions to overcome the deadlock. From portable metal shields to wheelbarrows with machine-guns, even ludicrous ideas like electrically charged water pumps, nearly everything was taken into consideration. In Great Britain, the new Ministry of Munitions received over 20,000 suggestions in 1915 alone, and a certain pattern emerged. The most promising ideas, the cars with front-mounted wire-cutting mowers, the armoured buses and motorised ploughs, all shared common features with which to overcome the perils of the modern battlefield: motorisation, armour and the power to destroy fortifications.

There had been experiments with Hornsby and Holt caterpillar tractors that drew heavy artillery on a set of ‘chain-tracks’, but most Generals at the time were cavalrymen and slow to adapt to change. Instead, it was up to visionaries, such as Lt. Colonel Ernest Dunlop Swinton. He had seen experiments with heavy rollers in France that were propelled from behind with motorised engines. He thought if they could be armoured and outfitted with machine-guns, they could crush German fortifications just by sheer weight.

Over the first half of 1915, Swinton met with many important and influential people, politicians and military men from the war-office, to pitch his ideas. Eventually, he came across an open door, not the army’s, but the navy’s. Winston Churchill as the first Lord of the British Admiralty, led the ‘Landship-Committee’, and not only had experience with armoured cars, but was willing to experiment. Under Master-General of the Ordnance von Donop, they gathered resources, engineers and facilities to build prototypes and conduct trials.

The second half of 1915 saw a series of failed prototypes, redrawn designs and general setbacks. Most of the problems lay with overcoming difficult terrain, because that strained the gears and the still underpowered engines. All of the plans and trials took place in total secrecy. If this was supposed to be a war-winning weapon, the Germans must not know of it. If a pencil pusher asked where all those resources went, he was told that they were for building water tanks for the front and that he should mind his own business. All those steel plates and mechanical parts appeared on the list for ‘Tanks’ and the name stuck. 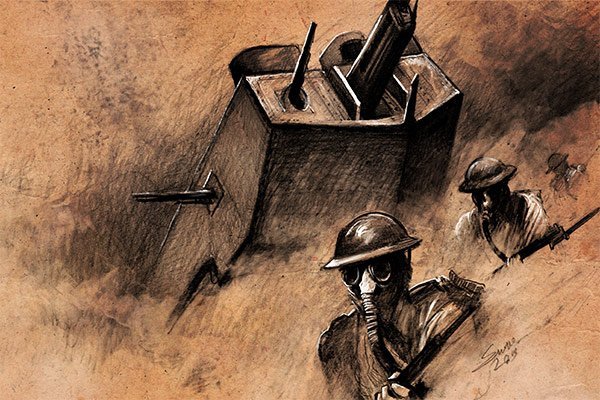 The initial prototypes, like ‘Little Willie’, were unimpressive, but the project was on the right track. The breakthrough came at the end of January 1916, as the first useful prototype, the rhomboid shaped MKI, nicknamed ‘Mother’, rolled over the test fields of Hatfield Park. ‘His Majesty’s Landships’ seemed ready.

They were loud and they were slow, but they worked. Swinton was ecstatic. He had wanted additional upgrades, like atomised acid spray to fight off boarding actions, grenade launching catapults, flame-throwers, or nerve shattering sirens that would instill fear in the hearts of German soldiers, but he was happy with what he got.

Still, he and his cohorts wanted more time to hammer out the flaws, but British High Command had other plans. On July 1, 1916, the Allied offensive on the Somme had begun, and as it unfolded, it did so into disaster. Casualties were higher than ever. Field-Marshal Sir Douglas Haig wanted to resume the attack in September and expected the tanks to lead them. The committee disagreed with this, since they wanted to use the tanks only in great numbers for maximum effect, as once the Germans knew about them, they would eventually deploy countermeasures. Haig and the British government overruled their concerns. Every available tank was to be thrown into the fray. The crews and machines were worked hard.

Of the promised 150 tanks of both the ‘male’ versions with 6-pounder guns and ‘females’ with machine guns, only 48 made it to the front. Many broke down en route, and specialised tools and necessary repair parts were in critically short supply. The tanks were to undergo their baptism of fire on September 15, as the spearhead of the main thrust towards Morval-Bapaume near Flers-Courcelette.

It was decided that the tanks would operate in small groups of three and work in close support with the infantry. Each man of the crew was issued a leather helmet, a pair of goggles, a gas-mask and a revolver. The already cramped interior of the tank was further filled to the brim with drums of engine oil and 30,000 rounds of ammunition for the machine guns. The conditions inside the tank were brutal.

Anyhow, as they approached the enemy lines, the tanks attracted the attention of seemingly every German machine gun around and soon the bullets clattered against the armour. The noise from the exposed engines, the shrieking gears and the cannon fire from the 6-pounder guns was deafening. The tanks stank of gasoline, cordite smoke and exhaust fumes, and inside it was hard to breath. With their backs to the hot engines and sliding around on spent cartridge cases, the gunners tried their best to hit the enemy through small viewports. But even the strong armour was not perfect and many tank-men were wounded from the lead-cores of the bullets that splintered as they hit the tanks. Tiny fragments of shrapnel found their way through cracks and weak-points, and hurt or blinded the men inside.

On his experience, Private J.L. Addy, Tank Corps. remarked: “When you’re enclosed in a tank and there’s that much racket, you don’t know whether it’s shells that’s hitting you or what you’re doing. The noise of the engine was tremendous, and we had to stand by with a pyrene fire-extinguisher and get ready to shoot it at the engine if it got too hot, because we had twenty gallons of petrol on either side of the tank and all round the sides there were racks of ammunition. If you had a fire in a tank you hadn’t an earthly. Jerry was shelling back, and you could feel the blast of the shells as you were looking through the gun slit; and within your range of vision, you could see the infantry moving all around. You just kept your finger on that machine-gun button, trying to knock out the machine-guns that were going for the boys.”

In the end, of the 42 available tanks, only 32 made it to the starting positions. 18 of them reached the enemy but only 9 were in the fight long enough to inflict serious damage. The others suffered mechanical failures, came under German artillery fire, or became stuck in shell holes or collapsing trenches.

Still, the success of the tank was undeniable. Where they broke through, they inflicted huge casualties among the confused and frightened German soldiers and were useful in destroying enemy machine-gun nests. Many Germans were cut down as they turned their backs in panic from the unstoppable machines. The press at home celebrated the new weapon. They were ‘Forts on Wheels’, ‘the Devil’s Chariots’, ‘the Armoured Landships’. Haig met with Swinton and was enthusiastic. He personally gave the order to produce a thousand more as soon as possible.

Still, the first tank engagement in history was far from the war-winning breakthrough. There were many design flaws and it would take further months of adjustments and alterations until the tank was really ready. The development of the MK II, III and IV improved the tanks with better gun sponsons, tougher shields, recoil systems and roof-protection. The French army worked in tandem and followed suit, building their own promising designs like the Renault FT-17, having their own experiences with mechanised warfare. But it would take until 1918 when tanks really made a difference.

The German spring offensive in March that year hit the British and French lines hard. The Germans now had a tank programme of their own, and the A7V, named after General War Department 7, sought to mirror the Allies’ success with tanks. Based on the same Holt tractor caterpillar system, the tanks were heavily armoured and sported six machine guns and one 5.7cm gun at the front. Only 20 were actually built, but they had a similar effect on the unsupported British infantry where they appeared, as the British tanks had on the Germans.

The first tank VS tank battle 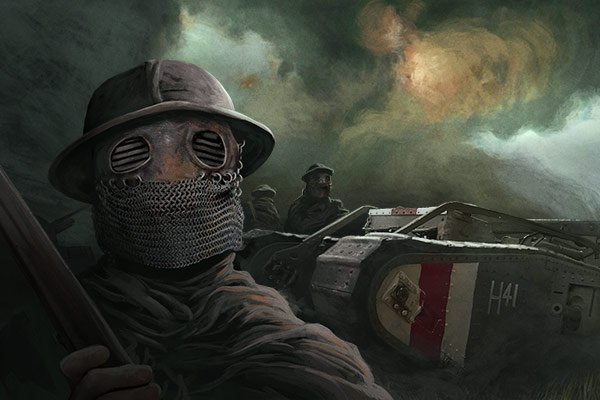 On April 24, the Germans mounted a small attack towards the village of Villers-Bretonneux. A total of 13 A7V tanks led the advance, spreading panic among the British defenders. The village was still contested though, as three of the German tanks moved in. At the same time, the British 1st Battalion of the Tank Corps was on the move. They had already come under fire from gas-shells, but the tanks, two females and one male MK IV, were still operational. On the outskirts of Villers-Bretonneux they met the Germans in the first tank versus tank battle in history.

Only lightly armed with machine guns, the two female Mark IVs could do little against the A7V’s armour, whose main cannons did heavy damage in return, so the females were forced to withdraw, but the remaining male returned fire. Tank against tank battle was awkward though. Hitting something while firing on the move was pretty much down to luck, and the loud, slow moving tanks had little ability to manoeuvre. Realising this first, the Mark IV stopped and its 6 pounder gun then scored three hits against one German tank, forcing its crew to bail out of the wreck. Another German tank was soon abandoned as well, probably because of mechanical failure. Before it came to a duel between the two remaining tanks, though, the Germans pulled back as British reinforcements arrived.

All throughout the Allied counter-offensive in the summer of 1918, and the offensives up to the very end of the war, tanks were deployed on nearly every battlefield in every theatre of the war in greater and greater numbers by the Allies. And although the war ended before the full potential of the tank weapon could be unleashed, it was clear to see that a new age of warfare had begun. Man had found an antidote to the machine gun, and once more, armies were on the move. The century of the tank had begun. This was the future of warfare.

The Battle of Flers-Courcelette heavily inspired our song ‘ The Future Of Warfare ‘, which is featured on our album, The Art Of War. Take a look at the lyrics we wrote here.

If you’re interested in a more visual interpretation of this story, watch our Sabaton History episode, The Future of Warfare – British Tanks of the Great War: