The Battle of Rorke’s Drift

The Defence of Rorke’s Drift

It was 1879 – the age of colonisation and conquest. The British Empire went to war in Africa, wanting to annex the Zulu Kingdom, which covered a large area in the south of the continent.

By now the British ultimatum to the Zulu Nation, to both withdraw and disband their troops, had expired. Overconfident of victory, the British 24th regiment went out to face the Zulus in a battle at the foot of a little mountain called Isandlwana, which they lost.

The British had left their wounded and sick behind at a small mission near the Buffalo River. There, on the western slopes of a hill the Zulu called Shiyane, the men spent their days drilling and parading under the command of the officers Bromhead and Reynolds. The two thatched buildings and the compound were known as Rorke’s Drift. James Rorke had been the son of an Irish soldier who had fought in one of the many border wars against the local African tribes. James on the other hand made a living by trading, hunting and the occasional gun-running with the natives until his suicide. His estate changed hands until it came to a Swedish missionary, who in turn leased the compound to the British colonial forces to use as a hospital and storage space.

“The camp is taken by the Zulus” 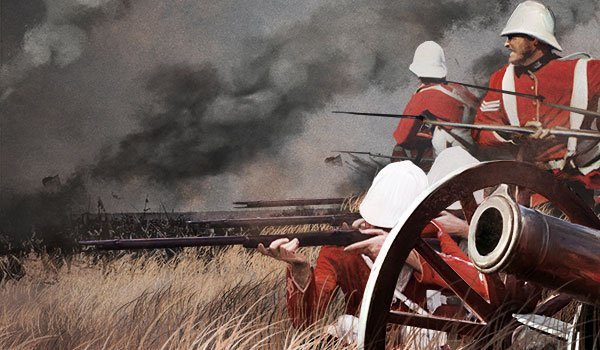 As afternoon drew near, the wind carried the sounds of distant gunfire through the valleys to Rorke’s Drift. It was the distinct sound of the two 7-pounders that the British main body had carried with them. At first it caused little concern, for just a year earlier a small British force had triumphed over 6,000 Xhosa warriors, so this would surely go no differently.

As the cannon fire subsided, a lone rider came galloping towards them. The man was terrified and without his weapon, only repeating a single sentence over and over again. “The camp is taken by the Zulus! The camp is taken by the Zulus!” More riders soon arrived, this time men of the Native Mounted Contingent. None spoke English but they had a note that read that the camp at Isandlwana was in danger of being overrun. Rorke’s Drift was to be fortified at once.

Under the guidance of Bromhead, Lieutenant John Chard and other officers, the men began barricading the missionary compound. Everything useful was dragged out of the storehouse, except for the kegs of rum and water. The reserve ammunition boxes were opened. They had 20,000 cartridges, enough to make a stand. They stockpiled food, mostly hardtack and bully beef, and stacked the heavy 200lb mealie bags and biscuit boxes into a defensive wall. Most of the compound was shielded by a waist high stone fence, which they now reinforced. Both buildings were solid brick houses, though, with the larger storehouse being about 30m from the hospital, which was small, divided into 11 rooms and crammed with men who were now making shooting holes in the walls, while all windows and doors were barricaded. The men knew that their enemy would be merciless and spare no one, not even the wound-ed.

The last remaining biscuit boxes and mealie bags were used to create a barricade in front of the storehouse, a last keep in case of a breakthrough. As the evening drew nearer, the lookouts on the roof spotted the first Zulu warriors. There hadn’t been enough time to clear the fields around the station and there was plenty of cover for the enemy.

The Zulus approaching Rorke’s Drift were of the 4,000 men strong Undi-Corps. During the battle at Isandlwana they had been part of the ‘Horns of the Buffalo’, the Zulu tactic to envelope their enemies. They had been tasked with widely outflanking the British but ultimately came too late to take part in the battle. The defeat of the British had been achieved without them and they had been denied glory. The Zulu military organisation was divided by age and rank, and there was a deep rivalry between the regiments. Only those mature veteran regiments who had won glory in battle were awarded the rights to marry and to bear the sacred white shields into battle. The Undi-Corps consisted of men in their physical prime, around 30 years old, hungering for pride and social status. They very much wanted to prove themselves. Led by Prince Dabulamanzi kaMpande, they had made their way to Rorke’s Drift.

The Zulu warriors were not suicidal fanatics, but cunning, courageous and highly athletic light infantry men, skilled in using their traditional weapons, clubs and spears. A few bore firearms, and although they were untrained in handling those effectively, even an unskilled rifleman could find his target. When they appeared on the scene, the Native Mounted Contingent had turned and fled, which left 154 men as the defenders of Rorke’s Drift, 20 of whom were ill. 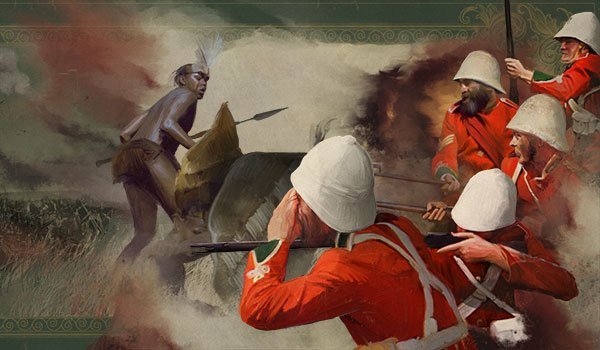 At around 16:30, the battle began. The first Zulus attacked in a frenzy. Worked up by their witch doctors and narcotic stimulus, they charged towards the south wall of the mission – 600 warriors against only 30 defenders. The British soldiers fired into the advancing men. A trained British soldier was able to load and fire the Martini-Henry Rifle every 7-8 seconds, so people managed around 8-9 shots each in the time it took the Zulus to close in. They sprinted from cover to cover, disregarding the men that fell. At 200m, the rifle fire caused massive damage, as the Zulu shields offered no protection against the high calibre bullets, and just before they reached the barricade, the British officers ordered a salvo at point blank range. The devastating effect of the fusillade broke much of the attack strength. Still, single men and small groups fought on, trying to scale the walls. Pumped up on adrenaline, they jabbed with their Assegai spears against the defenders, but once they tried to climb the barricades, they were easy targets for the longer British bayonets.

Once at the barricades, it was close quarter combat. The British officers dashed from point to point, revolvers in hand, inspiring the men to stand firm, shooting into the mass of attackers that pressed the defences. Where they could, the men worked together – one stabbing, the other reloading. The officers knew that the first battle they had to win was the psychological one; if the men faltered in fear, if they hesitated to kill or lost their heads in terror, all was lost. The Zulus could not be allowed to enter the compound. The men did not hesitate. Desperation met aggression, and they knew that they would either fight or die.

At 17:00, the great mass of the Undi-Corps threw itself against the mission. The British held. The Martini-Henry rifle was superb in this kind of fighting. Even when held like a pike, the soldier could still pull the trigger, and the long bayonet, known as the lunger, had the range on the Zulus short spears. Soon a belt of corpses lay around the mission, another obstacle the at-tackers had to step over. The Chaplains and the wounded passed ammunition and water to the defenders. It was evening, but still, the sun was beating down and the constant fighting was exhausting and dehydrating. It was adrenaline and camaraderie that kept the men sharp. And still the Zulus came on.

By 17:30 the defenders were nearly overwhelmed. The lines were too thinly held and they now ran the risk of losing everything. The growing exhaustion and the casualties had made them retreat to the inner line and establish a centre of resistance around the storehouse, behind the walls of biscuit boxes and mealie bags.

By 18:00, the Zulu commanders on the other side were getting frustrated. This was supposed to be an easy battle, but the casualties were high and there had been no major break in yet. They had been fighting for 90 minutes, but the British line still held firm, though the hospital had been cut off. Soon it was surrounded, and the Zulus were throwing burning spears on the thatch roof. It caught fire and the men inside had no choice but to flee. Everything played out in a few minutes. Men jumped out of the windows, some making a dash across the compound. Others tried to carry the wounded and sick with them, while others fought the Zulus who were now breaking through the doors. They were cut down by the Zulus. It was now all down to the final perimeter.

As the sun began to set, they made a massive attack to overwhelm the defenders. There were no tactical manoeuvres here; they either broke them or not. Once again, they were beaten back.

Darkness fell at 19:00. British ammunition was running low and rifles were running hot from constant use. Again, the Zulu tried to throw assegais wrapped with burning grass on the store-house roof but this time they were shot down in the attempt. Slowly but surely, the Zulu spirit was wavering. Throughout the night the aggressive chanting was heard around the compound, but the major weakness of the Zulus, their lack of a supply system, was getting to them. They were hungry, thirsty and exhausted.

It was a sleepless night for the defenders, but as dawn broke, the Zulu were gone. The Zulu host may still appear, but they would no longer attack. After a while the British ventured out to the battlefield. They searched the remnants of the hospital for survivors, but it was a gruesome sight. The Zulu had hacked their comrades to pieces. The official report said that 350 Zulus were counted dead, but according to diaries, it was many hundreds more. At 8 o’clock in the morning, a relief company finally appeared, and Rorke’s Drift was saved.

A total of 11 Victoria Crosses would be awarded to the defenders for a victory against a force that had outnumbered them by far. This was the most ever awarded to a regiment for a single action. One of those defenders, Lieutenant Chard, was recognised for tactfully building and reorganising the defences whilst also commanding the group of 150 men who successfully repelled the attack.
Find out more about Colonel John Rouse Merriott Chard’s life here.

The amazing story of the battle of Rorke’s Drift inspired our song, ‘‘Rorke’s Drift‘. Take a look at the lyrics we wrote here.

If you prefer a visual representation of this story, watch our Sabaton History episode, Rorke’s Drift – The Anglo-Zulu War.