The HMS Dreadnought was launched

It was the end of May 1916. By this point, the Great War had seen a few large naval battles, but nothing like what was about to follow.

A storm was brewing on the North Sea, as two mighty battle lines approached each other with deadly intent. Both the British Royal Navy’s Grand Fleet and the Imperial German High Seas Fleet brought armadas of fearsome battlecruisers and deadly destroyers into the fray, and among them, the mightiest battleships the oceans had ever seen – the Dreadnoughts.

The battleship of the future

In the early 20th century, British naval planners around First Sea Lord Jackie Fisher brainstormed about the battleship of the future. Their general view on naval engagements was quite simple. In an open battle on the high seas, where both sides enjoyed equal levels of vision and marksmanship, the vessel that could fire heavier shells at a longer range than its enemy would ultimately win the engagement.

Much of his thinking was influenced by the Battle of Tsushima of May 27, 1904. During this conflict, it was Japanese battleships that had forced the engagement onto the Russian Navy at a range of over 7,000 yards. Firing their 12-inch guns at a battle-speed of 21 knots, Admiral Togo’s vessels had the advantage over the Russians. His total victory strengthened the belief that overwhelming firepower, range and speed were the key to winning on the high seas. Fisher planned for a revolutionary battleship design that was to embody this martial philosophy; the new “Dreadnought” was to become the unchallenged champion of the seas. Faster, stronger and tougher than anything else.

When developing the Dreadnought, they first focused on firepower and range. The previous generation of heavy battleships were usually outfitted with four 12-inch guns supported by gun-batteries of a smaller calibre. Having such a mixed battery allowed the battleship to be flexible when reacting to threats at different ranges, but Fisher wanted to get rid of this defensive mindset. His Dreadnought committee argued that such a mix was not beneficial to the battleship, as different sized guns would need to be calibrated for different angles, trajectories and velocities. 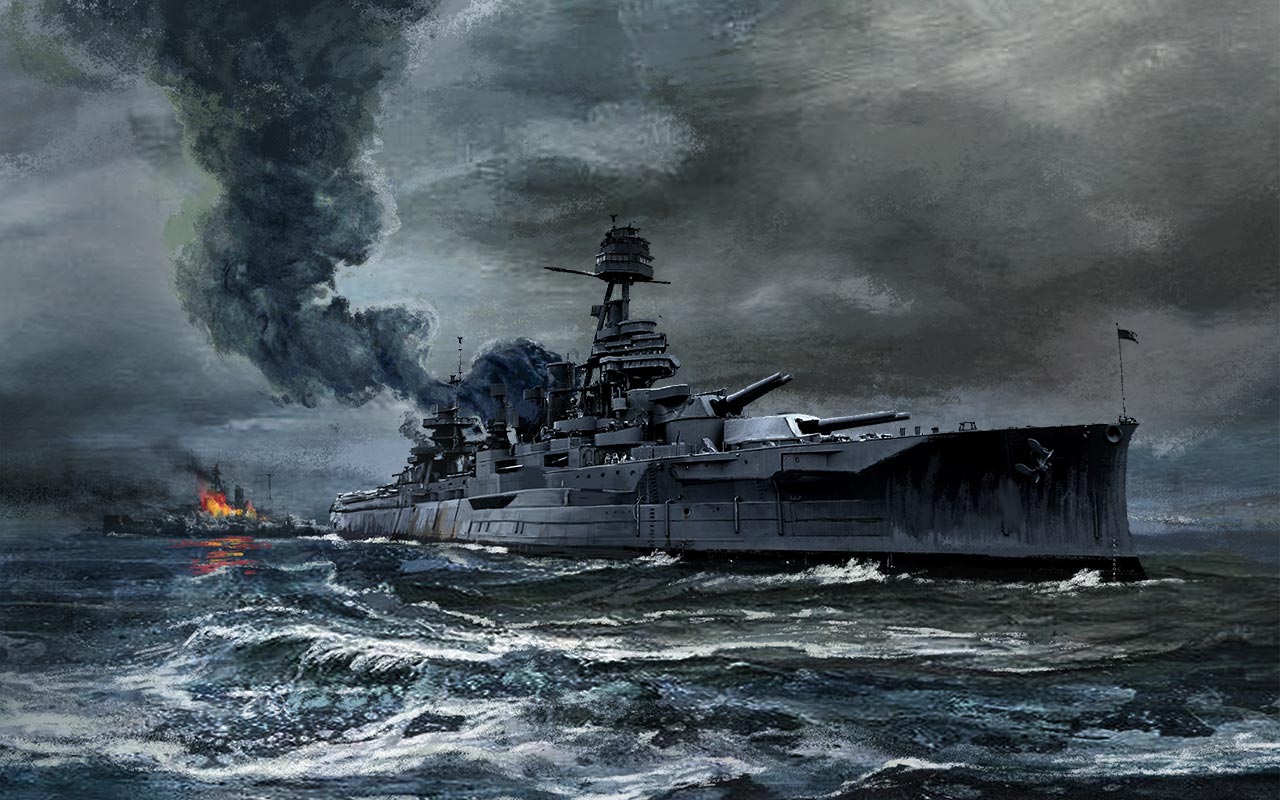 Instead, the Dreadnought was to be solely outfitted with the giant 12-inch guns. Secondary armament of 9.2 or 6-inch guns was meaningless to Fisher, as the Dreadnought would fight its battles way out of their range. The benefits of a devastating 12-inch gun salvo would beat any perceived flexibility any day.

Because of this mixed array of guns of different calibres, naval battles had often been fought at around three to four thousand yards of range so that smaller eight and six inch guns could be brought to bear on the enemy as well. Fisher, however, wanted the engagement to be fought at six thousand yards or more – a range where only the largest 12-inch guns were effective. Any lesser armed ship would be destroyed before it got in range to fire back.

It was calculated that if the Dreadnought brought its broadside to bear, then six – and later eight – guns could throw 6,800 pounds of high explosives and armour piercing steel at the enemy’s deck. With modern fire control systems this would annihilate even the heaviest battleship of its time, as no amount of armour could safeguard against such firepower.

The next component on the agenda when developing this monster ship was speed. Superior speed would be the Dreadnought’s sword and shield. When a captain could choose to engage and disengage at will, he could force time and place of battle upon his adversary. Out on the oceans, there is no real cover a ship can hide behind, other than maybe darkness or fog. A ship can’t simply slip back into safety when spotted. Once engaged, the faster vessel could overtake and annihilate the slower one.

Fisher envisioned the Dreadnought achieving 21 knots, but its size and weight made that impossible. Pushed to their limits, the standard reciprocating steam engines could maybe achieve a max battle-speed of 19-knots, but even that was limited. The heavy pistons inside the cylinders would eventually shatter and break under such stress.

The solution came with the invention of the turbine engine, which ran via steam being pressed against the blades of revolving discs, and it revolutionised the engine room. Turbine engines were comparatively clean too, created little noise or vibrations, and most importantly, they gave the Dreadnought the speed Fisher wanted. Its 17,000 tons were easily moved by a 23,000 horsepower engine.

The third component was armour. Superior speed and firepower are defensive in their own right, but having a solid belt of steel armour to fall back on when the shells were bursting would be better. The designers called for a thick skin of 5,000 tons of armour to be distributed around the ship. Each Dreadnought’s armour belt below the waterline had to be strong enough to withstand at least two torpedo hits. The battleship’s insides were safeguarded by watertight, self-contained compartments, without any horizontal exits. Many believed that the Dreadnought would be unsinkable. A direct hit would most likely doom men trapped inside, but the ship was not to be sunk by a single hole in its armour. If need be, the Dreadnought would just power through the enemy’s fire.

The revolutionary battleship is ready

In 1906, the HMS Dreadnought, whose name comes from the very first Dreadnought in 1573, was officially launched at sea. At that time, Queen Elizabeth wanted the British Royal Navy to show the world “how little she dreaded, and how little such a people could dread, the mightiest armaments of their enemies, while the battle for their liberties was to be fought on such an element as the ocean.” So once more this was to be embodied in a revolutionary battleship.

And revolutionary this overall redesign truly was. The Dreadnought shone with modern simplicity and standardisation. Gone were the relics of the past, like the edged ram bow at the forefront. Battle stations were streamlined, officer’s quarters were put inside the bridge, and the commander directed from the conning tower. All in all, the new Dreadnought was worth two or maybe even three older battleships. Everything else now seemed to be inferior and outdated in comparison.

In 1907, the Dreadnought went to sea for target practice. At eight thousand yards, it fired 40 rounds and scored 25 hits. This in itself was impressive, but it was not so much the number of hits that was so impressive; it was the amount of destructive weight each successful hit created. In a barrage of under eight minutes, the Dreadnought was able to deliver more than 21,000 pounds of shells onto an enemy battleship. Nothing could withstand that.

There were, though, some valid criticisms of this new revolutionary design coming from within the British Navy. At the time of the Dreadnought announcement, Britain possessed the largest Fleet on the planet and the strongest armada of pre-dreadnought battleships, but now, with the most powerful vessel in history being released from the dry dock, all those advantages in numbers suddenly became way less meaningful. In fact, the new standard of battleships gave Britain’s potential future enemies a new chance to compete with the Royal Navy on equal footing.

First among them was the Imperial Fleet of Germany, which of course began building Dreadnought-like ships of its own. Many denounced this new arms race of “Monster Warships” as unnecessary and extremely dangerous for world peace, but progress was irreversible, and soon, every sea-going nation wanted to build their own Dreadnoughts.

Even the Dreadnought’s original planners were already thinking of the next step in battleship evolution. What if they got rid of silly constraints like size or budget altogether? Why not go beyond what Fisher had designed in his original Dreadnought design and build Super Dreadnoughts? The Orion-class, which emerged only a couple years later, had even mightier guns, thicker armour and more powerful engines. These new monster warships were named Monarch, Thunderer and Conqueror. The only question left was: how would they actually perform in battle? This question would one day be answered.

On May 30, 1916, roughly a decade after its launch, the Dreadnoughts headed out to meet their foes. In the rough waters of the North Sea, towards the Skagerrak and Jutland, British and German battleships made ready to bring their mighty guns to bear and hurl tens of thousands of pounds of shells onto each other.

The building of HMS Dreadnought was indeed a revolution in battleship design. The uniform main battery, the steam turbines, the power to weight ratio – it all led to the most powerful gunships the world had ever seen.

This story of this fierce battleship heavily inspired our song ‘ Dreadnought ‘, which is featured on our album, The War To End All Wars. Take a look at the lyrics we wrote here.

If you’re interested in a more visual interpretation of the above story, watch our Sabaton History episode, Dreadnought – The King of the High Seas!: