The Warsaw Uprising was one of WW2’s major insurrections and part of Akcja Burza, a series of anti-Nazi uprisings often referred to as Operation Tempest. Conducted by the Polish Home Army (Armia Krajowa), the riot aimed to throw off the shackles of the German occupation of Warsaw, but was finally oppressed 63 days after its outbreak. The bravery of the Polish resistance inspired SABATON to write the song „Uprising“ from the 2010 output „Coat Of Arms“. 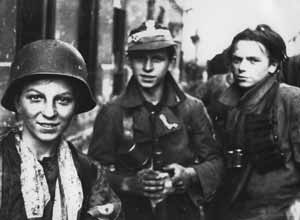 Polish boy scouts – even the young joined the resistance

In 1944 the already five-year-long occupation of the polish capital had left its mark on the city. Especially the Jewish inhabitants of Warsaw as well as the intellectuals suffered heavily under the cruel rule of the Nazi regime. But not before long a few first whispers of freedom began to roam through the streets of the city. Supported by the exiled Polish administration in London the Polish Home Army tried to form the resistance against the oppressors, establishing an own social system for the oppressed. Plans were made to oust the Germans and regain the lost city.

But on July 13th 1944 the situation changed dramatically. The first soldiers of the Sovjet army had crossed the Polish border and forced the Germans to retreat. This development put the Polish resistance under pressure. As the Red Army had already entrusted the self-sponsored Polish Committee of National Liberation with the task of administering the gained territories in Poland, a liberation by the Sovjets was a dangerous thing to wish for. To oust the Germans from the city seemed to be the only way for the Armia Krajowa to secure their claim of Polish independence.

Encouraged by the Allied attack on D-Day as well as the Stauffenberg plot on July 20th, General Tadeusz Bór-Komorowski decided to stage the insurrection at 5:00 PM on the 1st of August. Two days earlier the uprising was foreshadowed by a special broadcast on Radio Moscow in Polish language, prompting the inhabitants to “Fight the Germans!”. However, having discovered scattered resistance troops on dawn before W-Hour, the German occupation forces anticipated the uprising and rallied their soldiers.

As the under-equipped Armia Krajowa – only every fourth fighter possessed a weapon – consisting of 20 000 – 49 000 fighters charged at 5:00 PM, they were met by fierce resistance. Although the Home Army was able to capture important landmarks – namely the main post office and the Prudentia building -, they failed to breach the German supply lines. With this, the insurrection had missed its chief aim. Despite that the Polish Home Army succeeded to bring the largest part of central Warsaw under their control by the 4th of August. But the wrath of the Nazi regime was not long in coming. 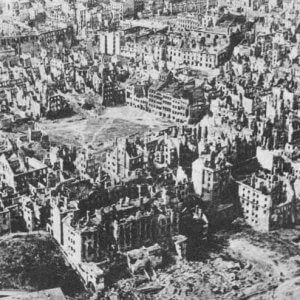 Warsaw after the uprising

Assigned to the task by Adolf Hitler himself, SS-Reichsführer Heinrich Himmler was determined to contain the uprising as fast as possible. Under his command the Germans quickly received reinforcement and turned the tide. Better equipped and supported by heavy artillery fire, they retook the city quarter of Wola on 5th of August, slaughtering over 50 000 civilians in blind rage. Although the german advantage in numbers was rendered useless by the narrow fighting ground of urban warfare, the Polish resistance was repelled street for street, house for house.

At this point the Armia Krajowa was left with no other option but to wait for Allied aid. But help never came. The Sovjet army had stopped their advance just a fews miles short of the city borders and prevented all Allied attempts of air support. Meanwhile, the partisans had to face food and water shortages. With no anaesthetics left, operations behind the lines had to be executed by full consciousness. Finally, on 18th of September, 107 American B-17 Flying Fortresses were allowed to refuel at a Sovjet airport, enabling them to drop relief supplies over Warsaw.

In the end, the airdrop was nothing more than a drop in the bucket. As supplies were finally depleted on October 2nd – 63 days after the outbreak – the resistance was forced to surrender. The Warsaw Uprising accounted for over 16 000 casualties on Polish and 8 000 casualties on the German side. In addition, 150 000 – 200 000 civilians were killed in the wake of the insurrection, mostly through mass executions. The wrath of the German occupiers knew no bounds – Warsaw was razed to the ground, left behind in utter devastation. The city was rebuilt in 1945 after being captured by the Red Army and is – to this day – a monument of fortitude for the Polish people.