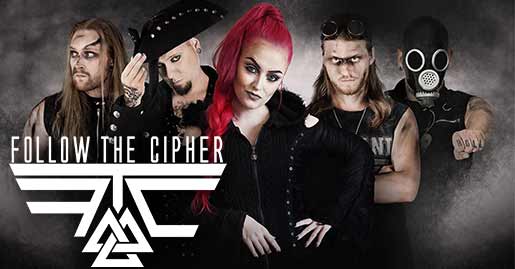 Follow the Cipher is a metal band that started in 2014 when Ken Kängström decided he wanted to do his own thing. Ken is known for writing songs together with Joakim Brodén for Sabaton on the albums “Carolus Rex”, “Heroes” and “The Last Stand” albums.

Ken started to write songs while he auditioned for singers and stumbled upon the fantastic and beautiful vocalist Linda Toni Grahn, and from there on, Follow the Cipher was created.

Follow the Cipher represent a dirty, dry, rusty and lonesome environment in a devastated future, collapsed by a careless consequence of our past mistakes. The rebellion (The Cipher) is a clan of deserters acting as a force against the new world’s brutality and depression.

FTC describes this environment in an adventurous way with the theme of their music and the lyrics within it.