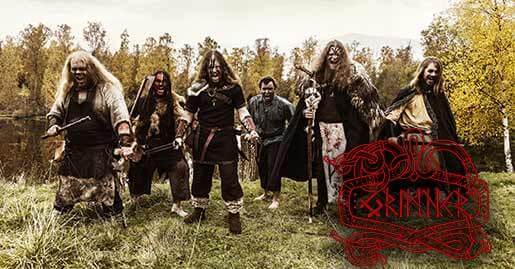 Sweden’s six-headed hird Grimner incorporate folk instruments into their own melodic, yet aggressive brand of metal. With lyrics that honour the norse gods and fallen warriors of old (explicitly sung in Swedish), they have taken enthusiasts of both metal and folk music by storm.

The band has recently performed at major folk metal festivals in Europe as well as being support act for Korpiklaani. Their latest full-length album “Frost Mot Eld” (2016, Despotz Records) has taken Grimner to the next level, an album that gives a new touch to the mix of folk and metal – resulting in outstanding reviews.

On stage Grimner gives a dynamic, intensive and jovial performance.
No matter if you are a fan of folk metal or not – this is something you should check out!