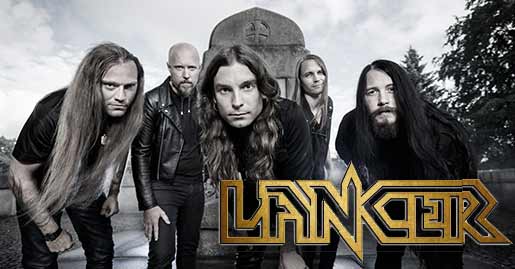 LANCER met at the Music Academy of Ingesund in Arvika, Sweden, and the common passion for heavy metal forged them together and LANCER was born. They invaded the metal scene in the spring of 2012 with their debut EP “Purple Sky”. The EP got a warm welcome from all around the world and gave the band a record deal with the Swedish label Doolittle Group AB, owned by the famous metal vocalist Christian Liljegren (Narnia), and they also signed a deal with Japanese label King Records at this time.

In early 2013 the follow up to the “Purple Sky” EP, LANCER’s self-titled debut album was released worldwide. The album was produced by Tommy Johansson (Sabaton) and Ronny Milianowicz (previous collaborations with Hammerfall, Michael Kiske and Timo Tolkki to name a few!), and it received great reviews from all around the world. Japanese Burrn Magazine gave the album 75/100 and Sweden Rock Magazine 7/10, naming the band a new hope for European power metal, and it received even higher grades from several European and American reviewers. LANCER’s music videos for the songs Purple Sky and Young and Alive have also been aired on Metal Hammer Greece’s own TV channel.

LANCER’s sophomore album “Second Storm” was a lesson in melodic metal and followed a long tradition of outstanding Swedish metal bands like Hammerfall, Sabaton and many more! The album was recorded in the world famous Leon Music Studios with producer Gustav Ydenius (Sister Sin, Mustasch, Enforcer).
Being released on Despotz Records in April 2015, ”Second Storm” earned amazing reviews from metal press all over the world, naming the band future successors to the throne of melodic metal. During the fall of 2015 LANCER joined German power metal band Freedom Call on support act tour, and received a fantastic reception from the fans!

When LANCER announced that they would start the recordings of their third album in May 2016, the renowned German metal label Nuclear Blast Records reached out to the band, and a new record deal was signed. LANCER entered Leon Music Studios once more with producer Gustav Ydenius. This time the band chose to let the world famous producer Miro (Avantasia, Rhapsody, Kamelot) of Gate Studio, Wolfsburg, master the album. In addition to signing with Nuclear Blast the band visited Japan in November and secured a new deal with Japanese label Ward Records.
The third album “Mastery” will be out worldwide in January 2017, and in connection to this the band will embark on a European tour together with HammerFall and Gloryhammer!