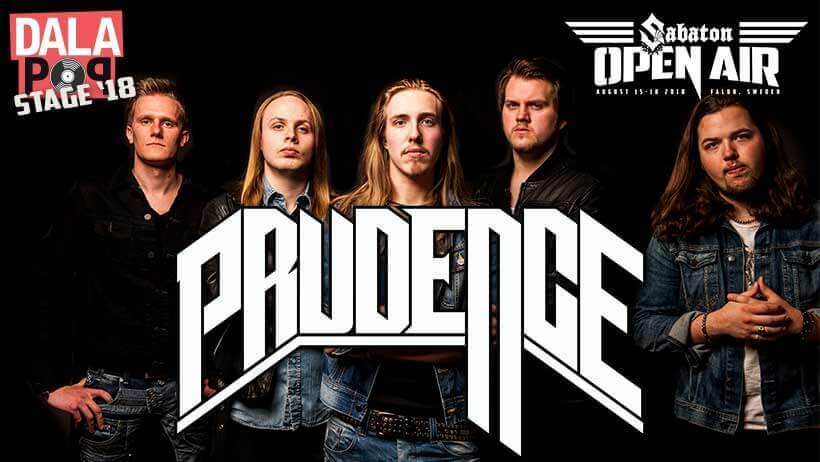 From the dark woods of Småland county, on the east coast of Sweden, rises Prudence – a melodic hard rock-/heavy metal-band influenced by both the 70’s rock and more modern acts. The music smells a mixture between old school bands like Black Sabbath and Graveyard combined with the heavy metal elements of Iron Maiden, W.A.S.P and Dio. With aggresive, hard-hitting lyricism, facing both the world of today and historical events we offer a wide range of storytelling.

Prudence’s debut-EP “Anarchy in Heaven” was released during may 2016 and has been followed by gigs all over Sweden, in Stockholm, Gothenburg etc. The first live recording was done during the first live performance ever, back on the local pub in early 2016, and can be found on Youtube.

Formed in 2015 by the guitarist Hannes Gustavsson, the bass player Andreas Frodig and drummer Jonathan Albertsson Prudence started writing the very first songs. In a tiny basement the first song that was written became “Outbreak” and ended up on the “Anarchy in Heaven” EP, sealing the vision the three had with the band.

Not long after the start-up the guitarist Erik Waldemarson was recruited for the band and the rest of the songs for the EP started taking shape. After auditions with many different singers the band finally found Anton Johansson, about the same time the EP was completely composed – so he more or less learned the songs while recording the vocals in the studio, and took the songs to a whole new level with his raw, yet stable voice.

In Twisting Serpent Studios Lars Broddesson mixed and mastered the EP, and the live-clips aswell. Following the studio adventures the band went out playing gigs with for example Strÿkenine and Mad Man’s Choice.
The newest single “Straight from the Gutter” took the band in a more aggressive and heavier direction. It’s an anthem about standing up for yourself without taking shit in a world of corrupt authorities, greedy leaders and religious bullshit.

During 2017 Prudence have played festivals such as Mörkaste Småland and opened up for Raubtier but also been a lot in the studio since a new record is taking shape.