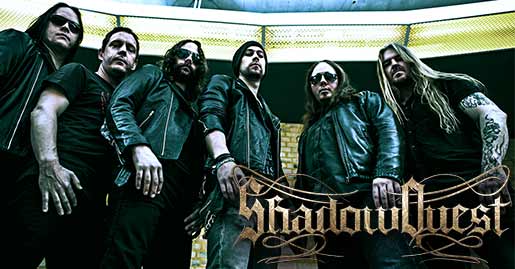 ShadowQuest, in its earliest form, was conceptualized more than two years ago.
Ronny and Ragnar had been writing songs for a long while, when they came across a singer they thought would fit the music perfectly. Patrik, being a fan of both Dionysus and Sinergy, was very interested and happily accepted the spot as vocalist.

Ronny and Kaspar had been collaborating since the years in Dionysus, and it was with honour that Kaspar grabbed the keyboard wizardry position. Both Jari and Peter had been involved in various projects with Ronny, and two phone calls later the band was complete.

”We are extremely happy to have found each other”, Patrik says. ”Six persons that are stable and easy-going, as well as dedicated and having the same taste in music and music writing. It simply is not easy to find. In addition, we all share the same rotten humour. Epic.”

Coming up with the band name was a process. It is hard work to find a name that everyone can agree on and feel for. A number of names was discarded, sooner or later, until the band decided for ShadowQuest.
Artwork magician Thomas Holmstrand, who is known for logotypes and art work for Dionysus, Sinergy and Saint Deamon etc., was hired to design an artwork concept for the band.

Musically, ShadowQuest is a mixture of many influences. Traces of Dionysus can be heard, spiced with heavier guitar work signed by Widerberg/Huss. Ronny’s ambition was to create a musical landscape in the vein of ”Painkiller” and ”Keeper of the Seven Keys”. Patrik added scents and flavours of Avantasia, while Kaspar worked hard to go deeper into the lyrical well he had been exploring with Dionysus and later Ride the Sky.