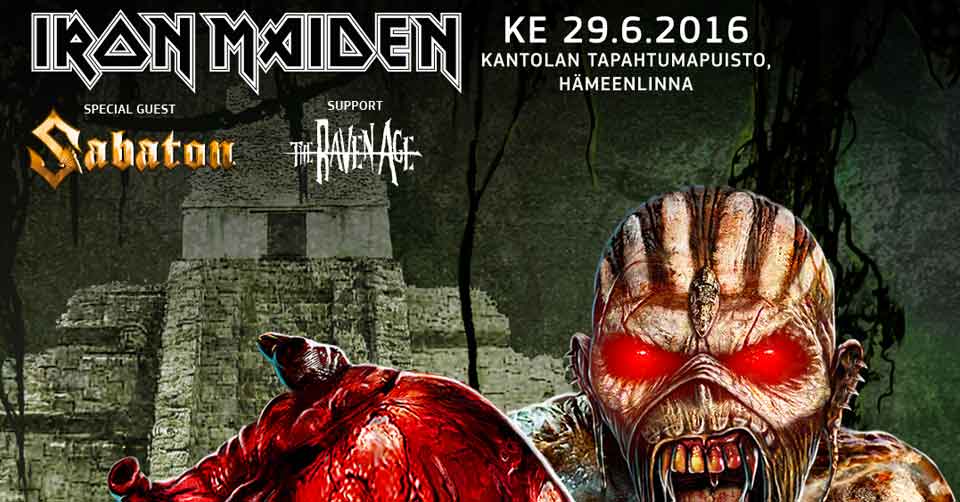 Today we are very happy to announce that we will be Special Guests to Iron Maiden at Kantola Event Park, Hämeenlinna, Finland on June 29:th 2016.

Tickets for this event is available here: http://www.ticketmaster.fi/event/iron-maiden-lippuja/167875

– We hope to see you all there! Iron Maiden, one of the greatest metal bands of all time, will conquer Hämeenlinna’s Kantola Event Park on Wednesday 29th June as part of their massive The Book Of Souls World Tour. We are happy to announce that the special guests of the show will be the highly acclaimed Swedish heavy metal band Sabaton and the British band The Raven Age. Concert tickets are now on sale at Ticketmaster.

Sabaton will release a live-DVD “Heroes On Tour” next week’s Friday. It includes full-length concerts from Wacken and Sabaton Open Air which was arranged in the band’s hometown Falun in 2015. Sabaton played arenas last year on their spring tour in Finland and sold gold with “Heroes”, their studio album that was released in 2014.

The Raven Age is a melodic metal from London, UK and they have toured before with Mastodon, Gojira, Wolf, British Lion and the Finnish band Santa Cruz among others all over Europe. Their self-titled debut EP went straight to #1 spot on Amazon’s Hot New Releases Chart in 2014.

Iron Maiden released their “The Book Of Souls” album last autumn which debuted at the top of the charts in over 40 countries and held the #1 spot on the Finnish Album Charts for two weeks. The band begun their massive The Book Of Souls World Tour from Florida on Wednesday and the tour will take the band to 36 countries all over the world. In the summer the tour will make a stop at Kantola Event Park which was opened last year.