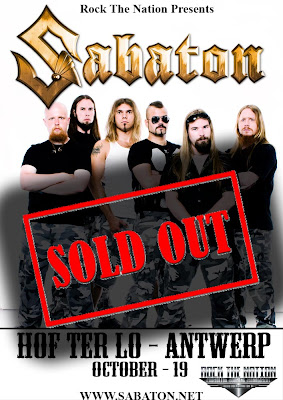 Once again the Belgians proves that they are among the top of the
Sabaton fans in the world, and we are totally shocked but of course very happy to announce that the show on the 19´th of October at Hof Ter Lo in Antwerp is now completely sold out.
This is 3 months before the concert and it’s totally insane.

We had however expected this concert to be sold out and have a plan for such a case, but we never thought we would have to employ it so quickly.

We will add another show at Hof Ter Lo, on the 23´rd of October!

We guess there are a lof of crazy Belgians who will go to both shows so we have printed a special extremely limited, individually numbered and signed single that everyone who can show that he/she went to both shows by bringing the tickets of both concerts to the concert on the 23´rd will get for free.
This CD will not be availible ever again and never anywhere else. For sure it will be a true rarity!
The setlists for these 2 shows will of course differ as much as possible without making those who attends only one of the shows suffer.

Ps. Tickets for several other countries are also running low and we expect to start announcing more sold out shows very soon.
Tickets for the second show are availible from today.

Announcing North America Tour with Judas Priest
BIGGER, BETTER AND MORE METAL THAN EVER! We are...Read More>>
Scroll Up