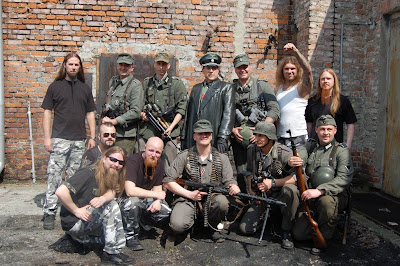 After two times postponing the shooting of the music video we can now inform everyone that we spent the last week in Poland recording the musicvideo for the new song Uprising, and what a video this is! We think we can say it is the biggest heavy metal video ever produced.

For 2 days over 200 people worked around the clock on the set shooting scenes including over 100 actors that were directed by Jacek Raginis and produced by Bogna Janiec of Studio Filmowe N production company.

The premiere show of the new video is scheduled to be on the 1´st of August which is the anniversary of the start of The Warsaw Uprising in 1944.

A big thanks to everyone involved in this project and special thanks to SKOK Group and its producer Mariusz Wielebski, who made this video possible.

Here you can see pictures from the filming.

And here is a link to a videoreport from the set.