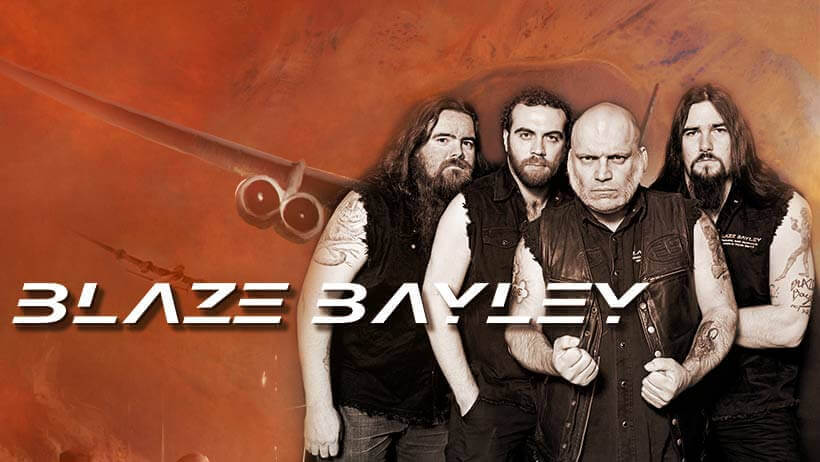 BLAZE BAYLEY is a singer/songwriter born 29th May 1963 in Birmingham, England. Having started his professional music career in WOLFSBANE in 1984, his career elevated to global heights when he joined IRON MAIDEN with whom he released two albums and toured worldwide between 1994 and 1999.

After leaving Iron Maiden, BLAZE BAYLEY embarked on a solo career and in March 2018 will release his 10th album, alongside a truly enviable reputation as one of the hardest working artists currently touring worldwide.

The past 3-4 years has been an exciting period in Blaze’s career, with a real sense of purpose, increased sales and media attention, not least with the recent front cover of Powerplay magazine (November 2017 issue), together with a 3 page tour report from North America. Blaze received further recognition when voted by fans as the 67th best singer of all time in Sweden Rock magazine, whilst a guest performance with Disturbed at the UK’s premiere music festival Download was another highlight.
Blaze’s current release schedule is based on his ‘Infinite Entanglement’ trilogy of albums, following a sci-fi story and concept. Part I ‘Infinite Entanglement’ was released in March 2016, Part II ‘Endure and Survive’ in March 2017 and Part III ‘The Redemption of William Black’ is set for March 2018.

Whilst Classic Rock magazine, Powerplay and more, have provided special features and interviews, the reviews have also been unanimous in hailing ‘Infinite Entanglement’ as a triumph. For example….

For writing, recording and touring worldwide, Blaze is flanked by three musicians from British metal band ABSOLVA – Chris Appleton on guitar, Martin McNee on drums and Karl Schramm on bass, welcomed by the unwavering support of the die-hard fans, also registering with a new younger audience, as well as helping to alert the Maiden fanbase to Blaze’s music.