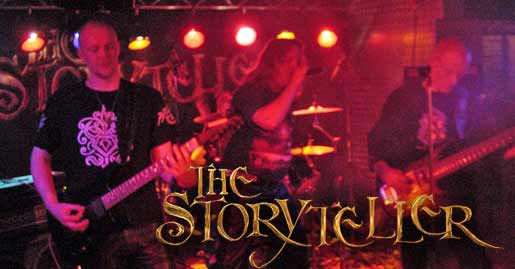 The Storyteller – Heavy / Power Metal with medieval melodies.
That is the band’s own characterization of the style they play.

This is a trademark that really speaks to what the band delivers and together with fast, melodic metal with fantasy lyrics, The Storyteller became one of the major posternames in the Swedish Power Metal scene.

TS is a seasoned band with six studio albums in the backpack, and over the years the band has been appearing with bands like Helloween, Blind Guardian, HammerFall, Stratovarious, Sonata Artica, GammaRay others …
They have also played at the major festivals in the Nordic countries where their live performances have been very appreciated.

L-G Persson Who is the singer of The Storyteller says:
“We are really looking forward to playing on Sabaton Open Air wich is one of the major festivals on offer within the metal scene. We’re just writing material for a seventh album, which will continue the story from album nr 1 & 2 and Sabaton Open Air will be a perfect opportunity to introduce some of the new songs – but we will also deliver all our old favourites that the audience loves.”

So for anyone who likes fast and melodic metal in the style of Blind Guardian, this is the band that you do not want to miss out during this festival.