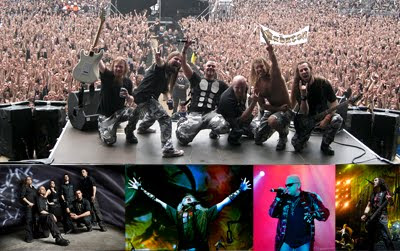 We can now reveal what kind of plans we have for the show at Rockstad: Falun 2011.

Due to the fact that Sabaton will be on the billing on many european festivals this summer, and have lots of other plans for the future, we will only make one big festival show on Swedish ground 2011, and of course that will be in our hometown Falun…

And usual, the Rockstad:Falun shows is something we put quite some extra effort into, so we can now proudly announce that this years show will include several guests that have been of significant importance to Sabaton in one way or another, or simply will make a unique or special addition to the show.

UDO Dirkschneider.
Original frontman of the legendary Accept, and it’s a dream coming true for us to have “The Voice of Metal” join us on stage.
Many U.D.O and Accept albums lies close to the heart of Sabaton and they are often played in our tourbus.

Chris Boltendahl.
Since Joakims voice and singing style has been compared to, as well as claimed to be inspired by Chris of Grave Digger we really need to try it out live.

Frederic Leclercq.
We have just done a tour where Fred temporary replaced our own Rikard.
It was great to share stage with this guy who normally plays bass in the masters of speed guitar heroes Dragonforce. After the tour we did not want it to stop, so we simply had to end it on a special place.

Falun… -Be prepared for a triple guitar attack!

Van Canto.
As Sabatons music feature a lot of vocal harmonies and big choruses we believe that this addition will make this concert EVEN MORE powerful.

As if this was not enough we will do the biggest pyroshow in Sabaton history, spiced up with a very unique lightshow that will brighten up the skies of Falun this summer night.