The failed attempt to occupy Constantinople (Istanbul) during WWI claimed the lives of 44,000 Allied soldiers, more than a quarter of whom were from Australia and New Zealand. The date troops landed on the Gallipoli peninsula is commemorated as Anzac Day in these countries.
JANFEBMARAPRMAYJUNJULAUGSEPOCTNOVDEC
14 Apr23 Apr25 Apr30 Apr

The Gallipoli campaign was a long and controversial attempt to reach and occupy Constantinople (now known as Istanbul) during World War I. The doomed campaign cost 44,000 allied troops their lives, more than a quarter of whom were from Australia and New Zealand. It is the inspiration behind Sabaton’s emotionally-charged Cliffs of Gallipoli, from 2008’s The Art of War. 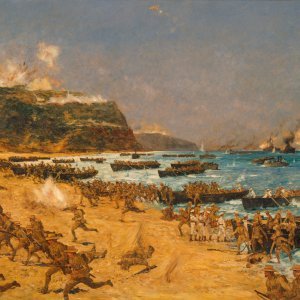 The 38-mile long Dardanelles channel, at Turkey’s Gallipoli peninsula (Gelibolu in modern Turkey), was a potentially-important supply route to Russia in the early 20th century and was controlled by the Ottoman Empire. The British government had previously considered taking action to gain control of this channel between 1904 and 1911 but the armed forces advised against the plans, believing them too dangerous. In November 1914, after the outbreak of what would become The Great War, the operation was reconsidered as an opportunity for England and France to help their ally Russia and weaken the Ottoman Empire. Early the following year Grand Duke Nicholas, commander of the Russian armies, appealed for help and the Allies decided that attacking the Dardanelles would divert the Ottomans and relieve pressure on the Russian frontlines. The campaign was famously supported by Winston Churchill, who was at that time First Lord of the Admiralty.

The campaign would be a combined naval and military operation, with a seaborne attack followed by a landing on the Gallipoli peninsula, with the eventual aim of capturing the Ottoman capital Constantinople.

The naval bombardment began on 19 February but was twice halted because of bad weather. This first attack was repelled by the Ottomans, and with three battleships sunk and three more damaged, the navy withdrew, stating that they could not succeed without help from the Army.

The Gallipoli landings happened in two places in the early morning of 25 April – Cape Helles for British troops and ANZAC (Australian and New Zealand Army Corps) beaches for troops mainly from those countries. The invasion was expected by the Turks because of the prior naval bombardment, and attempts to capture small beachheads were met with a seemingly impenetrable Ottoman defence led by Colonel Mustafa Kemal. The troops facing Kemal’s soldiers were young, inexperienced, and lacking proper equipment – including there being a significant shortage of shells. Conditions were squalid and diseases such as typhoid and dysentery ran rife, leading to more than 100,000 men being evacuated due to sickness during eight months of fighting. Huge numbers of reinforcements were sent from Britain, Australia, New Zealand, India and France, but the Allies made precious little progress.  Another landing was made on the west coast of the peninsula on 6 August, and after a few small gains the assault was stopped. 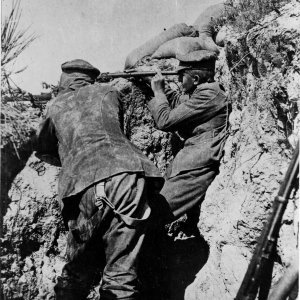 Back in the UK, the invasion was becoming increasingly controversial, causing the head of the British Navy, Admiral Lord Fisher, to resign from his post. By September of 1915 it had become clear that even greater reinforcements would be needed to make any further progress on the peninsula. At this point command of the operation was given to Lieutenant General Sir Charles Monro, who immediately recommended that forces should be withdrawn and the whole campaign stopped. He was supported by secretary of state for war, Lord Kitchener, who visited the peninsula to confirm that the operation was futile. The retreat happened in stages and it was January 1916 by the time the last troops were withdrawn.

By the end of the campaign, Allied casualties numbered more than 213,000 – of whom more than 44,000 lost their lives. The only positive outcome of the campaign was that it diverted large numbers of Ottoman troops away from the Russians. For the most part, the invasion attempt was a total failure, costing the Allies dearly in terms of life and resource, and giving the impression around the world that they were a weak and inept military force. It caused significant repercussions within the British government, humiliating all who recommended the campaign, most notably Winston Churchill, who resigned from government and went to serve in the war in France (but would later redeem himself for his role during World War II, becoming renowned as one of Britain’s greatest wartime leaders), and the Prime Minister H.H. Asquith, who resigned in December 1916.

Gallipoli was the Ottomans’ only major victory of the whole war, but it came at great cost – with an estimated 250,000 Turkish and Arab casualties. In modern Turkey, the campaign is viewed as a final patriotic defence of the land in the dying days of the Ottoman Empire. After the eventual Allied victory in The Great War, the Empire was dissolved, and Gallipoli commander Colonel Mustafa Kemal went on to play the starring role in the events that followed – establishing the Turkish Republic and becoming its first president under the name Kemal Atatürk, carrying out huge reforms and modernisation in the country until his death in 1938. 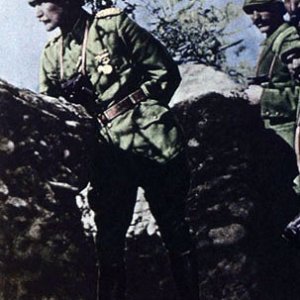 Around a quarter of those killed in the Gallipoli campaign were ANZAC soldiers. For Australia and New Zealand, Gallipoli was an important step toward these countries’ future independence from Great Britain. The anniversary of the landings is now known as ANZAC Day, and is Australia and New Zealand’s official military remembrance celebration, surpassing Remembrance Day – the anniversary of the armistice that ended World War I, which is observed by the UK, France, and many other countries.