Kristallnacht – The Night of Broken Glass

The date was November 9, 1938. The National Socialist leadership of Germany had gathered in Munich to commemorate the Beer Hall Putsch – Adolf Hitler’s failed attempt to take power 15 years earlier. Then, the news arrived that Ernst von Rath had succumbed to his wounds. He was a young German diplomat who had been shot in the German embassy in Paris by Herschel Grynszpan, a Polish-German Jew.

Joseph Goebbels, German Propaganda Minister, now addressed the party officials and spoke vividly of a global Jewish conspiracy that aimed to push Germany into a war with France. Outraged, the men rushed to the telephones, and urged their local Nazi henchmen to act.

The ‘Night of Broken Glass’

What followed was Kristallnacht, the ‘Night of Broken Glass’. A nationwide pogrom against Jewish communities in Germany. 1,000 synagogues and prayer rooms were vandalised or set on fire, while 7,500 shops were wrecked and looted. Jewish neighbourhoods were attacked and 90 Jews were killed. It was the climax of years of anti-Jewish policies and harassment.

Adolf Hitler’s chancellorship had turned anti-Semitic rhetoric into state policy. Since mid-1935, the Jews faced increased harassment. Under Reinhard Heydrich, the German Security Service (SD) began monitoring Jewish organisations and affairs more closely. To the Nazis, Judaism was not only totally alien to German culture, but also the natural enemy of National Socialism. Hitler believed in an international Jewry that pulled the strings behind both Soviet Bolshevism and Anglo-Saxon Capitalism, and Germany must disconnect itself from their influence once and for all.

For the Führer’s planned ’cleansing’ of the Reich, Heydrich recruited Adolf Eichmann, a former desk worker at Dachau concentration camp. It would be his job to implement the stricter policies aimed at excluding Jews from the German economy and everyday public life. By making their lives as miserable as possible, they would push the Jews to ‘voluntarily’ emigrate from the Reich. They were not to feel welcome nor safe in Germany and public opinion was to be swayed accordingly.

Over the following years, Jews were denied entry into theatres, cinemas, museums and restaurants. They were banned from using public transport and from owning bicycles. Shopping was restricted to one hour a day, and there was a strict curfew in the evening. Jews were not allowed to buy certain things, like cigars or flowers. They were not allowed to own telephones or typewriters either. They eventually had to wear a yellow badge to visibly differentiate themselves from everyone else, and they paid extra taxes.

The Nuremberg Racial Laws of 1935 were set in place to legally segregate the Jews. Citizenship was restricted to people of ‘German’ blood. Jews were reduced to mere subjects of the Reich, without political rights. They were fired from the civil service. Teachers and professors were ousted. Jewish-owned shops were attacked. The Hitler Youth organisation chased Jews out of public spaces.

The laws were so strictly enforced that even the smallest misconduct could lead to imprisonment or worse. Jews lived under a constant fear of inspections, house searches and death threats.

And then Kristallnacht happened. Hitler, however, was furious at Goebbels for inciting all the violence in the streets. An unregulated mob roaming the streets not only discredited Nazi authority, but also had a sobering effect on the German people. Many bystanders were shocked by the uncontrolled violence and the lawless behaviour of the mob. Worse for Hitler, they felt sympathy for the Jews that were manhandled and humiliated by the Nazi party members. Hitler actively forbade any such organised pogroms in the future. The Jews, he insisted, were to be expelled from Germany through laws and edicts, and detained far from the public eye. Over the next months, Jews who had broken the laws were sent to concentration camps. To Buchenwald, Dachau and Sachsenhausen, which had previously housed political prisoners and actual criminals. Now, the majority of inmates were Jews.

A self- fulfilling prophecy

The fate of the Jews was to be tightly bound to Hitler’s ambitions. On the road to war, the Führer stylised himself as something of a prophet. In his speeches he repeatedly warned of international Jewish influence, and that if the Jews would steer Germany into another World War, then they would not survive to see its end.

It seemed like a self-fulfilling prophecy, as by December 1941, Hitler had invaded the Soviet Union and declared war on the United States. But his belief in the international conspiracy remained, and his war became a war against Jewish life itself.

On December 20, 1941, in a villa outside Berlin, the Wannsee-Conference began. Prominent Nazi party members met with officials from the Reich Main Security Office and from the occupied territories. Here, they would decide once and for all how to answer their Jewish Question. The discussions were to offer “clarity on questions of principle” about the “preparation of the Final Solution of the Jewish Question in Europe.” Emigration was not enough anymore. The war had changed ‘Judenpolitik’ to something far, far more sinister.

Authority over the Final Solution was given to the SS. Its leader, Heinrich Himmler, envisioned the first Europe-wide deportations of Jews from the west to the east. Eichmann’s office was ordered to prepare the removal of hundreds of thousands of Jews from Germany, Austria, Bohemia and Moravia to the overcrowded ghettos of Eastern Europe.

Since the war began in September 1939, the Jews of Galicia, the Wartheland and Poland, organised as the General Gouvernement, had been forced to live in segregated residential districts, but even though they were impoverished and cramped together in appalling living conditions, these Jewish communities survived. The Final Solution was to even deny them that. SS doctors now came into the ghettos to sort the residents into two categories. The first category was for young and healthy Jews who were able to work for the German war effort. The second was for those that could not – the old, the weak and the sick. Those people were to be liquidated.

The regular concentration camps already had improvised ‘special treatment’ programmes – a euphemism for the outright murder of Jews that could no longer work. Jews that were sent from the Lodz Ghetto to the Chelmno camp were herded up a ramp and through a door. Behind that door, they entered the dark back compartment of a gas van. On their drive to a remote location, the men and women were asphyxiated, either with bottled carbon monoxide gas or exhaust fumes piped into the compartment. Once they reached the designated burial ground, a group of Jewish prisoners was ordered to drag the dead from the van into excavated pits. At the end of the day, those workers had to enter the pit and were shot dead. 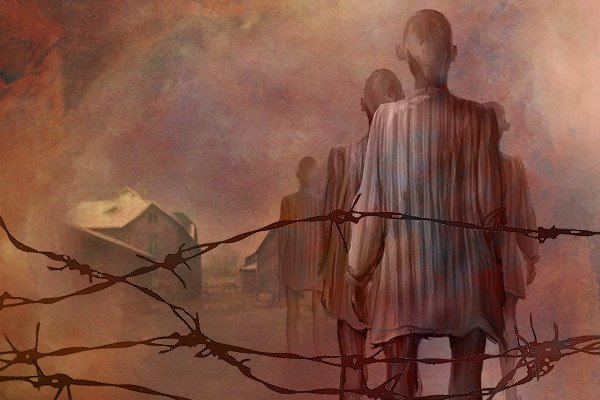 The Belzec Death Camp was the first installation for mass murder on an industrial scale. Belzec was enclosed by fences of barbed wire with watchtowers. When trains full of Jews arrived, usually an SS officer stood in front of the crowd and reassured them that they would only remain in Belzec for a short time. They were told that they would have a shower and receive their valuables and other belongings afterwards. Undressed, the men walked first into a long corridor, walled off by barbed wire. It was there that the Ukrainian guards took over from the Germans; chronic shortages of manpower forced the SS to rely on multitudes of foreign auxiliaries. Known as Hiwis or Trawniki men, Ukrainians, Belorussians, Lithuanians, Latvians and Poles were recruited to serve as guards of the extermination camps. Armed with bayonets, clubs and whips, they broke any resistance with terrifying violence.

The gas chambers themselves were crude, simple buildings, 4 by 8 metres long and 2 metres high, with double wooden walls. Essential was the airtight, rubber sealed door, which also had to be strong enough to resist any strong force from within. Several hundred prisoners were pressed into the small space of the gas chamber. Once the doors shut behind the crowd, the lethal exhaust fumes from a dismounted Soviet tank engine were piped into the chamber. The men were so tightly packed that when the doors were again opened, the dead stood in an upright position. Mouths slightly open, with their hands often pressed against their chests. The women went next, after fellow prisoners came to cut off their hair to be used for industrial purposes. By then, it must have dawned on many of the women what fate awaited them. The SS men also didn’t care that the guards raped many of the young girls before sending them into the gas chamber. The dead were buried in large pits concealed from the train station, and Jewish workers tidied up the station platform before the next train arrived.

The Final Solution was a vicious cycle. Ghettos were refilled with Jews from Central Europe as the former inhabitants were sent to either labour camps or condemned to death. Each wave of round ups meant a death sentence for tens of thousands of Jews. As the SS grew in power over civil administration, the classifications changed and more and more Jews were marked for death. New extermination camps were built as well – Treblinka, Majdanek and Sobibor. 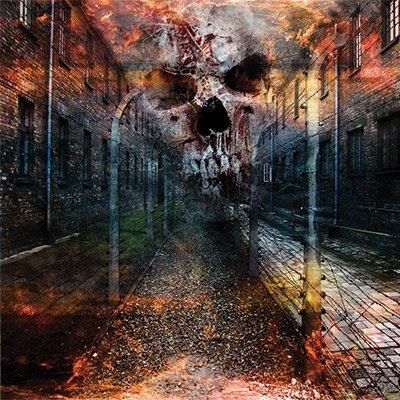 Treblinka had little of the clean and deceptive murder machine the Nazis first envisioned. The massacres often started right at the train station, as the Jews were alerted to their impending fate by the corpses lying on the ground. The camp simply could not kill people fast enough to hide its purpose. It is estimated that Treblinka killed around 4,600 people a day. That’s nearly 200 per hour, every hour.

Auschwitz became the last place designated as an extermination camp, though it had been in use since early in the war as a terror camp for Polish officials and dissidents. In July 1942 it was incorporated into the Final Solution. While Auschwitz I was to remain mainly a concentration camp for forced labour, a second Auschwitz camp at Birkenau would experiment with new extermination techniques. The first gas chamber there opened in March 1942 and it was outfitted with crematoria for disposing of the corpses of the dead. Once the prisoners were inside the gas chambers, SS men wearing gas masks would remove the covers of the ceiling vents, opening cans of Zyklon B poison. The body heat of the people pressed into the chamber caused the Zyklon B crystals to vaporise releasing hydrogen cyanide gas. The Jews painfully choked to death on the fumes in minutes. Auschwitz was also the place where German doctors experimented with mass sterilisation of many Jews that were not destined for immediate extermination.

The darkest chapter in German history

The Holocaust is vital to be remembered, as both a commemoration for its victims and as a warning to future generations of the depths to which humanity can sink, and the atrocities man can commit against fellow humans.

The story of Kristallnacht and the events surrounding it heavily inspired our song ‘ The Final Solution ‘. Take a look at the lyrics we wrote here.

If you’re interested in a more visual interpretation of this story, watch our Sabaton History episode, The Final Solution – The Holocaust: