Diary of an Unknown Soldier

“The dance begins! From a thousand guns came endless howling, crashing and banging. Great flashes lit up the sky as the earth trembled under crushing blows. Then came the screams of the dying! Dear God in heaven, let this morning be past. Pulses racing, each man held on in the jaws of Hell. And we stood firm, shoulder to shoulder, but the enemy kept bringing up fresh troops. Our little band kept shrinking. The deadly hail of lead tore first one then another of us away. We melted away like snow in summer. All around us was death and flames.”

This quote was taken from the diary of a soldier from the Great War. His identity is known, but reading it, could this not be the experience of so many others? Of hundreds of thousands of frontline soldiers? Does it matter if it was on the Western Front, in the Isonzo Valley, the Carpathian Mountains, Palestine, Galicia or in Africa? 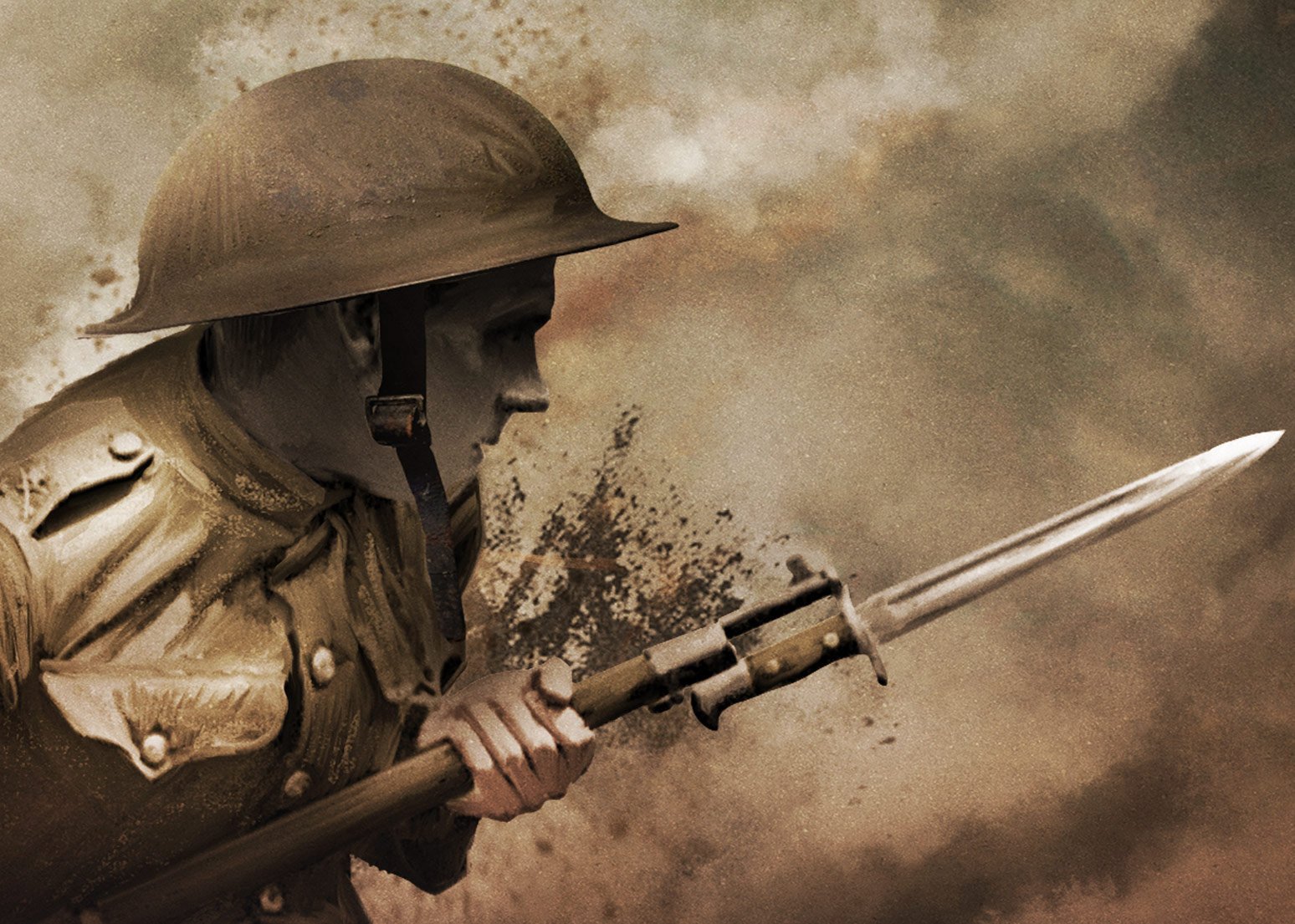 Millions of men on all sides went out to fight the war of wars, only to lose their lives. Many simply vanished, never to be found again, their bodies sinking in mud, water and sand. The German Empire, the Ottomans, Austria-Hungary, France, Russia… they all lost millions of men who are now resting in long rows of graves. But many of those graves are empty or filled with the remains of people who have never been identified. The British Empire lost around 1,000,000 men. Almost half of them were listed as missing at the time of the armistice and were eventually presumed dead. 170,000 of them were never found or identified. They are the unknown, the lost.

They lie somewhere, perhaps in unmarked graves. Their remains might have been dumped with others into a shell-hole or were strewn to all four winds by the violence of war. For the relatives, this was as an unnecessarily cruel fate. Their loved one had given up everything for his country: his life, his future, and now he didn’t even have a final resting place. Devoid of any closure, all they knew was that he had gone missing, presumed dead. Where had he died? What were the circumstances? Was it quick or painful? Or maybe he didn’t die and had been captured. Or was in some hospital, long forgotten. Who could say?

If a rank and file soldier died, it was often just a simple stock message that was sent out. That he was a good soldier, admired by his comrades, that his death was quick and painless. This, of course, helped little to ease the pain. Even after the war ended, the streets were full of women wearing full mourning dress, all in black and shrouded in long veils. They were tragically withdrawn from the rest of the world.

For Great Britain, this was problematic. Their dead lay on the continent, in Belgium and France, and it was debated if they should bring the bodies back to offer closure to the families. At the end of 1915, the French government had made the promise that it would provide a permanent resting place for all French war-dead. Every French soldier would have a grave site after the war, paid by the government. Britain had soon followed suit, preparing to buy land in France and Belgium in perpetuity. But such a promise was easily made during wartime. Now, as it was time to make good on it, the politicians hesitated.

Meanwhile, people began travelling the battlefields on their own, searching for a sign of their loved ones or a hint of their final resting place. Whole tourist groups would travel to the last known battle areas to find some sort of a clue or at least a token or memento that would remind people of their existence. What they encountered were many graves, whose description read nothing more than ‘A Soldier of the Great War’. Nearly every family created some sort of small shrine in their homes, and many local communities created memorials of their own. But for many politicians, such individual forms of remembrance were seen as a growing and dangerous disconnect between the grieving families and their government. So, it was time to act.

At first, Britain created the Cenotaph in 1919. A large monument in Whitehall, that, in itself, signified a symbolic tribute to honour the ‘The Glorious Dead’ and ‘Unknown Comrades’ of the war, though the term ‘Comrade’ would soon be changed to ‘Warrior’ because of it being too closely tied to the Russian Revolution. The term cenotaph stems from the Greek words ‘kenos’ and ‘taphos’, meaning ‘empty grave’, and was specifically meant to be without decorations or glorification. But the empty tomb was, after all, just that. An empty tomb. Despite its strong aura, people felt that something was missing.

Then, the French announced their plan to honour their unknown soldier, their ‘poilu inconnu’, by burying the remains of an unidentified French soldier at the Arc de Triomphe in Paris. The British agreed to do something similar, deciding that the remains of a British unknown soldier should be exhumed from the earth on the continent and be carried back to Britain. He would be an ambassador; a symbolic representation for the dead that never came back, that were still somewhere out there. His funeral was planned for Armistice Day in 1920.

On November 7, 1920, four field ambulances drove to one of the four main battle areas of the British army on the Western Front – Arras, the Somme, Ypres and the River Aisne. Their instructions were kept secret, but they were each to find and exhume a British soldier buried in one of the many graves that were marked as ‘Unknown’. It had to be a grave with not a single piece of information about who the British soldier was or what circumstances had led to his death. It was deliberately random, because the unidentifiable body from the soils of Flanders and northern France was to symbolically stand for every missing soldier.

As each party found their body, they put the remains into a sack, loaded it into the back of the ambulance and drove to the headquarters at Arras. Each ambulance had a different time of arrival that evening, and the men were immediately ordered back to their units after delivery. Then, the corpses were re-examined to make sure that they were indeed British but had no other marks that would identify them. The four bodies were wrapped into the Union Jack Flag and put in front of a specially made coffin. At exactly midnight, Brigadier General Wyatt entered the chapel. Without any further information, he pointed at one of the bodies. The chosen body was placed into the coffin, while the others were quickly reburied in an unknown grave in the nearby cemetery.

A French honour guard kept watch over the body all night, as the British filled sixteen barrels with earth. The Unknown warrior was to lie under the earth for which he gave his life. He was ‘Tommy Anonyme’. The next morning, the coffin was put into a carriage and drawn by six black horses to the docks of Boulogne. There, French Marshal Ferdinand Foch was waiting with another honour guard to pay tribute to the British Warrior who fell in the Great War for King and Country. The coffin was brought on board the British destroyer, HMS Verdun, and with a salute of the French shore batteries, returned to the British Isles.

The French had done something similar for their ‘poilu inconnu’, who was taken to Paris in the evening of November 9. The French authorities had gathered eight different bodies from the main French battle areas. Initially, it was supposed to be nine, but in one area it was seemingly impossible to be 100% certain that the remains were solely French. Such was the devastation on that battlefield that French and German bodies were intermingled even in death. It was never revealed what area it was, although rumour has it, it was Verdun.

Early on November 11, the British Unknown Warrior was draped in a special flag, one that had served as altar cloth at Vimy Ridge, Ypres and Cambrai, and was prepared for his final journey. A steel helmet, field webbing and a sidearm were placed on the coffin, and the carriage made its way through London towards the Cenotaph in Whitehall. It was a funeral procession worthy of a Field Marshal, but it was also simple, without fanfare or celebration.

All of London was quiet. Silence fell over the city like a shadow, as the carriage moved slowly through the main streets. All along its route, people stood and watched. At precisely ten minutes to eleven, the carriage halted and King George stepped forward, lay a bouquet of red roses – the commemorative symbol before poppies took over – and a wreath of bay leaves on the coffin. The note on the wreath read: “In proud memory of those who died unknown in the Great War.”

The overwhelming, oppressive silence was interrupted by the eleventh hour, as Big Ben struck. Life in all of London, all of Great Britain, all of the empire, grounded to a halt. Everywhere people stopped what they were doing and turned to their inner thoughts and prayers. Similar scenes were reported from outside the empire, in France, Belgium, Portugal and Italy, in Germany, Austria and many other countries. What followed was the Great Silence of two minutes. The first minute was to remember those that fought and came home. The second minute was for those that didn’t. For everyone who was missing a father, a son, a husband, a brother or a friend, the man inside the coffin of the Unknown Warrior represented hope. But not only in what he symbolised. His anonymity meant that there was the slim chance that it actually was that person. This man could be that missing son, father and brother. This made the coffin of the Unknown Warrior such a powerful memorial.

Both the Cenotaph and the Tomb of the Unknown Warrior became cherished symbols of commemoration. People had places to mourn and to put their minds to rest. Every year they attracted thousands of pilgrims and tourists from Britain and the Commonwealth, and each Armistice Day they were the centre of remembrance. To this day, they are still here to remember the Unknown Soldier – he who fell in war and never made it back home.

The soldiers who lost their lives fighting for their countries during the Great War heavily inspired our song ‘ Diary of an Unknown Soldier ‘. Take a look at the lyrics we wrote here.

If you’re interested in a more visual interpretation of the above story, watch our Sabaton History episode, Diary Of An Unknown Soldier – Lost in the Great War: