In the 1920s, Brazil was haunted by internal conflicts, both politically and socially. Radicals both left and right fought for control of the state and a series of coups and insurrections destabilised the country. The rise of Getulio Vargas in the wake of the Brazilian Revolution of the 1930s meant that on the one hand, Brazil began an era of industrialisation and social reforms, while on the other hand, the country slowly shifted into authoritarian dictatorship.

By 1937, Vargas was basically ruling the country by martial law, but although he had been inspired by and copied from the European fascists on his rise to power, he did not officially align himself with them. One major reason he did not was the growing influence of the United States.

The US felt that Brazil, as well as most of central and south America, was part of its sphere of economic influence and watched carefully for any signs of foreign influence. Indeed, there was a growing German influence in South America, especially in Argentina, Brazil’s major enemy and rival, though both countries comprised significant German and Japanese minorities who influenced public opinion.

When the US joined the war after Pearl Harbor in December 1941, American politicians acted quickly. In January 1942 they met with leading figures from all over South America and made an alliance with most of the nations, except Argentina and Chile. Brazilian politicians would still have gladly traded with the Axis, especially after Germany promised favourable arms deals for raw materials, but the US made it perfectly clear that this was not approved of and consequences would follow, so Brazil joined their South American alliance.

The Axis Powers were well aware of the importance of raw materials from South America to the Allied war effort, so German and Italian submarines began targeting cargo vessels from Brazil en route to the US.

In August 1942 alone, German submarine U-507 torpedoed and sank five Brazilian ships, and hundreds of dead Brazilian sailors caused a huge public outcry. Although the isolationistic Vargas government did not want to be involved in the war, public opinion forced his hand and Brazil declared war on Germany on August 22, 1942.

This meant mobilising the army and navy, though both were in a rather poor state. Brazil did not have a large army nor the equipment to outfit one. In fact, they were equipped with an amalgamation of European weapons, so they turned to the US for help. The US wasn’t all that keen on helping out, since American industry had its hands full with equipping their own units, but they couldn’t turn down the Brazilians without insulting them so they offered to supply them with uniforms, rifles and some older artillery pieces, but everything else would have to wait.

Brazil began training a division of three regiments, with service and support companies attached to it. The Brazilian Expeditionary Force, or FEB, was a 25,000-strong division. Although they were outfitted from head to toe with American helmets, field jackets, boots and knives, they still had to train with old Springfield rifles instead of the standard M1s. By July 1943 they were ready, but the tanks, halftracks and jeeps that had been promised had still not arrived, as they were not prioritised by the American quartermasters.

But where would the FEB be deployed? Guard duty on the Portuguese islands of the Atlantic was suggested, then there was talk that they would ship out to North Africa, but nothing happened for a whole year. In the meantime, the Brazilians waited and trained.

By mid-1944, the war in the Mediterranean had progressed from North Africa to Sicily and then bogged down in Italy. With the Americans now engaged in Northern France, they could use all the help they could get in Italy, where there was already a multinational force fighting at Monte Cassino. In July 1944, the first Brazilian regiment reached Italy, but the Americans there did not really know what to do with them at first. They didn’t even have enough barrack space for them.

By now there was a lot of discontent with the whole waiting around to do what they trained to do. The Brazilian soldiers were eager, but had been held back for so long, that by then they had the saying: “Mais fácil à uma cobra um cachimbo fumar, do que à FEB embarcar” – “It is more likely for a snake to smoke a pipe than for the FEB to go into combat.” The smoking snake became so popular that they made patches of it for their uniforms.

By September 1944, FEB approached the frontlines in Tuscany, at the Arno River. Here they had their baptism of fire. Most of the Brazilian troops were dangerously green despite their extensive training. Only a few older officers had actual combat experience from the Brazilian Revolution, but they fought skirmishes against German and Italian units until the winter came.

Allied high command was determined to make a Northern Italian push in spring 1945 with the aim of capturing Bologna. For that, they would have to first secure the high ground in northern Tuscany. In the winter of 1944/45, the Brazilians were sent out to fight in the mountains in temperatures below -20°C, and often against veteran German Gebirgsjäger. Most of the Brazilians hadn’t even seen snow before.

Fighting in the mountains was as tough as you might imagine, the terrain was difficult and the Brazilians engaged German forces at Monte Castello, a well defended artillery position. They were often sent out at night on combat patrols to infiltrate the German lines, probe their defences and capture prisoners.

As the 1945 campaign season began, Allied High Command began Operation Encore. This was a combined American-British offensive to finally drive the German 10th and 14th armies out of Italy. The Brazilians, supporting the Americans, would send out their whole division. They were tasked with attacking Montese, a major German strongpoint in the south of the Po Valley. The attack on the city was planned for mid-April and the Brazilians would advance on the left flank of the American thrust, this time supported by armour. 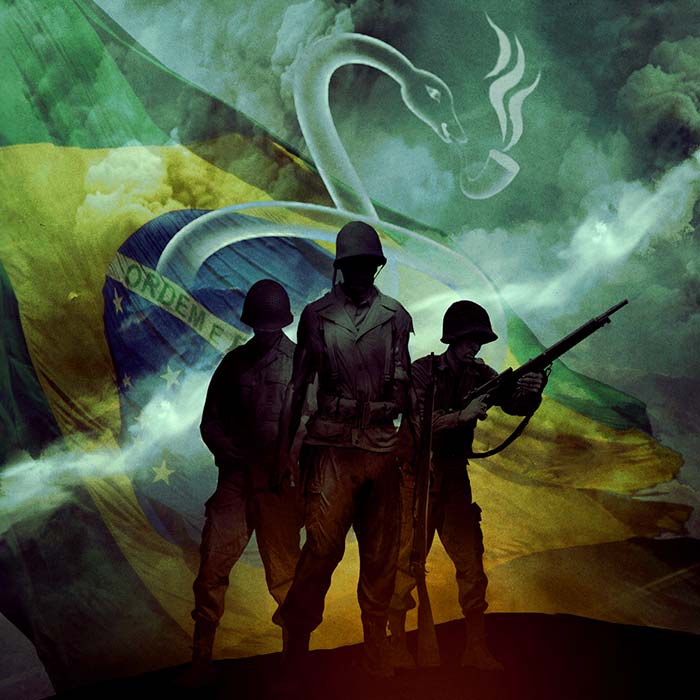 Prior to the attack, the Brazilians sent out patrols to reconnoitre the heights and villages around the city, or to clear minefields and update the maps, but the German infantry lay in wait, and on April 14th, right before the main attack, the Brazilian mountain infantry patrol consisting of Geraldo Baeta Da Cruz, Arlindo Lúcio Da Silva and Geraldo Rodrigues de Souza, was ambushed by a large German force. Spotted by a German machine gun, the three men ran for cover. They were heavily outnumbered and could not be reinforced, but they did not surrender. Instead, they returned fire until their ammunition ran dry and mortar shells began falling around them.

According to the legend, the Brazilians still refused to surrender and instead fixed their bayonets and advanced on the Germans. The three were killed. Their opponents were so impressed by their bravery that they buried the men and placed a cross by the graves with the marker “Drei Brazilianischen Helden”, which translates to “Three Brazilian heroes”.

The battle for Montese began and the three heroes were not the only Brazilians to die that day. Montese was liberated by the Brazilians after several days of house-to-house fighting, and this battle was both the heaviest and also the final major battle the FEB fought in the Second World War. Fighting continued after the battle as the Germans retreated, but once Mussolini was killed by Italian partisans on April 28th, the unconditional surrender of the Axis forces in Italy was signed.

The battle for Italy was over and so was the war for the FEB. For the Brazilian national conscience, the death of the three heroes became synonymous with their struggle in a war far from home, in an unfamiliar land on unfamiliar ground.

This fight has become legend and we will never know what exactly happened on that day, but the story of those brave Brazilian men helps us make sense of the seemingly senseless death of millions on the battlefields of the world.

These three young men died fighting against the Nazis to save others, the lives of strangers, and that is the ultimate sacrifice. Today, there is a permanent monument in Montese honouring these men, and their Mountain Infantry comrades who fought to liberate the town.

The Drei Brasilianischen Helden incident inspired us to write ‘Smoking Snakes‘. Take a look at the lyrics we wrote here.

If you prefer a visual representation of this story, watch our Sabaton History episode, Smoking Snakes – Brazilian Expeditionary Force.