The story of Witold Pilecki is as tragic as it is heroic. He was born in the Russian Empire near the Finnish border in 1901, spent his youth as part of the nationalistic Polish pathfinders and fought in independent Poland’s new army against the Soviets in the Polish-Soviet War. He lived a peaceful life for much of the interwar years, but eventually returned to the army reserves, and in 1939, was mobilised against the German invasion.

Pilecki’s Ulan regiment was shattered by the advancing Wehrmacht, but he joined other Polish stragglers and kept fighting until the fall of Warsaw. In late October, he disappeared into the underground, where he joined the resistance movement of the Tajna Armia Polska, an arm of the Armia Krajowa, the Polish ‘home-army’. One of their tasks was to get inside knowledge about German prisoner of war camps, and one camp in particular, in the small town of Oswiecim, Auschwitz in German, where many Poles simply disappeared. It was suspected that they were sent to Germany as forced labour, but no one knew for sure.

Pilecki came up with a dangerous plan. He would personally infiltrate Auschwitz, uncover the truth, and organise resistance in the camp. On September 19, 1940, using the alias Tomasz Serafinski, he intentionally walked into a German security sweep on the streets of Warsaw. SS-men seized him and the next day he was herded alongside other Poles into trucks at the Warsaw train station. All day they drove east, the men pressed together without food or water. The rest of this story is told directly from the source material, from Pilecki’s personal report about his experiences in the camp.

Arriving at the camp, Pilecki and the crowd of men were driven forward by brutal beatings from the guards. Some men were pulled out of the group at random, unprovoked, and shot in the head to break any thoughts of resistance. Accompanied by the laughter of the guards, they were then pushed on past the barbed wire and towards the parade ground, where a group of men in striped clothes was waiting for them. These men jumped the newcomers with fists and clubs – some were beaten to death. The men in the striped clothes asked them questions about their background and jobs, and those who said academics or doctors were knocked to the ground. With boots kicking against their heads, their murderers proclaimed that this is the “Concentration Camp Auschwitz, my good man!”

His head shaved, Pilecki hurried out of the bathhouse, though a guardsman knocked out two of his front teeth because he did not hold the sign with his prison number between them. From now on, Pilecki was neither himself, nor Tomasz, but a number – prisoner 4859. In his paper thin blue and white striped uniform and a pair of ill-fitting wooden shoes, he found himself on the parade ground once again. There, he encountered the murderous men again. They were called “Kapos”, prisoner functionaries. Often German or Polish criminals, they were tasked with keeping things in line inside the camp, since the regular SS-men lived in barracks outside. Most of the Kapos were violent sadists who enjoyed brutally beating and torturing the helpless prisoners. Wearing yellow armbands with the Kapo label, they also oversaw the labour companies, to one of which Pilecki was assigned. 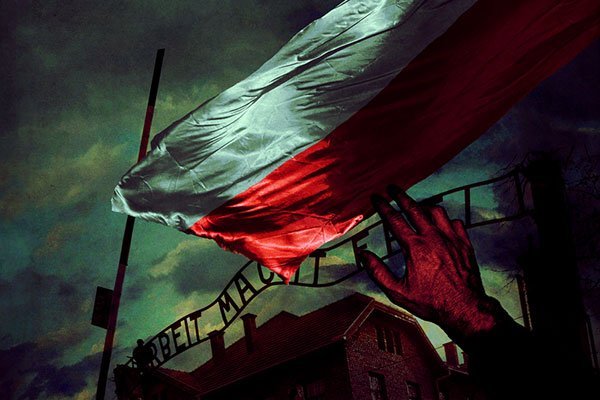 In that labour company it became clear that Auschwitz aimed to first exterminate the Polish intelligentsia. Prisoners with academic backgrounds who were not used to demanding physical work, or who lacked the experience and the dexterity to work in the quarries, were mercilessly beaten to death by the Kapos. Being too exhausted to lift another brick or push a wheelbarrow was also a death sentence. Every evening fewer people returned to the main camp.

Every walk to the latrines and every trip to the bathhouse was accompanied by beatings and harassment. Those who came late to morning parade or tried to hide away were hunted down, dragged to the parade ground, and either hanged or shot in front of the others.

Many tried to kill themselves, usually early in the morning before the day of torture began. If anyone tried to escape, the whole block was punished for it, standing out in the open for hours, or doing punishment sports, where men too exhausted to lift their arms fell and died under the boots of the Kapos. Often, the only time to catch your breath was when they were busy murdering another prisoner. Pilecki’s good physical condition saved him from this fate, but for how long?

Pilecki set out to build his first resistance cell – a group of five men. Later he would create other groups, but none of them knew of the existence of the others, so in case they were captured and tortured they could not betray the whole network. Those groups would either organise food or clothing, or would help other members to get a job, since it was clear from day one that staying in the worker groups, even well-conditioned men like Pilecki would soon die. So many of those worker prisoners did, in fact, die. that the prisoners had to build the first camp crematorium. Pilecki noted that the “camp became one big mill, which ground living people to ash.”

In 1941, as more and more prisoners were brought in, the camp grew. Larger fences were needed, as well as more barbed wire and more guard towers. And as Auschwitz grew, it needed to feed itself and this opened up jobs for the older prisoners. With careful planning, Pilecki got his groups into the carpenters, the postal service and the barbers. He eventually got himself a job as a repairman for an oven inside an SS-man’s house outside the camp. Upon leaving the living hell of Auschwitz, he returned to a world of lavish gardens, laughing children at play, and villagers having normal everyday conversations with one other.

Pilecki felt the questions burning inside him. What was the real world? What was the real nature of man? What was the culture of the 20th century? Since mankind had advanced so far from the barbarism of old, how was this still possible? Or was it the true face of humanity? Would the whole world look like this if the boundaries of civilization disappeared?

Each morning he and the other prisoners found themselves surprised to still be alive, their bodies thin to the bone, black and blue from the daily beatings, riddled with lice and fleas, living on a starvation diet. Only his daily mantra: “You’re not giving up”, helped Pilecki keep on, and he tried to inspire others to do the same. Survival was only possible through friendship and mutual help. Loners didn’t last long.

Now, up until May 1941 it was possible for ordinary Poles to be released from Auschwitz, mostly by their families paying enormous sums to the Germans. Those released prisoners smuggled Pilecki’s notes to the Armia Krajowa, but when the war between Germany and the Soviet Union began, this stopped. Instead, new groups began arriving to the camp. Many were now Jews, and by the end of August the first Soviet prisoners were transported to Auschwitz.

The start of the gas chambers

Pilecki reports that one day 700 officers were tightly packed into a room all day, until finally, a group of German soldiers with gas masks on threw gas containers inside. This was the first act of gassing people with Hydrogen Cyanide at Auschwitz, according to Pilecki. Soon after, on his way to work, he passed groups of naked Soviet prisoners waiting to be led into to the crematorium, where they were gassed and burned.

The Kapos were often brutal savages, but the bestiality of some of the SS guards was even worse. Pilecki tells of guard dogs trained to go for the throats of prisoners, the torture of smashing testicles with a hammer and many stories far too nightmarish to tell. Now with his cells set up in important positions all over the camp, Pilecki was ready to start a revolt, but needed help from the outside to be successful. The prisoners were thirsty for revenge and ready for anything, since they did not fear death after everything they had endured. But even if they managed to overwhelm the guards and take the camp, they would not be able to hold it for long. Pilecki believed that the Armia Krajowa had received at least one of his messages. He had urged them to stage an attack, send in paratroopers from the free Polish army over in Britain, or drop a crate of arms onto them – something. But so far, nothing.

Without help from the outside, Pilecki’s third Christmas in Auschwitz came and went, and Auschwitz was now changing. There was no longer collective punishment, no outright murder or even everyday brutality, or at least it was toned down. Auschwitz became a factory, which would now systematically murder its prisoners instead of individualistic, random killing. Not with the batons of the Kapos but with Phenol and Gas. There were three crematoriums working simultaneously, able to burn corpses within minutes.

By April 1943, more and more of the surviving Poles were sent out of Auschwitz to make room for Jewish prisoners from all over Europe and the Soviet Union. This meant the end of Pilecki’s network, as its members were sent to other camps. After two years and seven months of surviving in Auschwitz, Pilecki decided it was time to break out, since an uprising was no longer possible.

He got a night shift job at a bakery outside the camp. Shortly after Easter, as one guard was asleep, he and two other men pushed the door open and ran. Shots cracked behind them but they ran all night and all day until they reached a small town. With help of patriotic Poles, Pilecki smuggled himself back to Warsaw where, on August 23, 1943, after nearly 1,000 days in Auschwitz, he met with commanders of the Armia Krajowa, telling them of his experiences, all the death and torture, but people hesitated to believe him. It all seemed too unbelievable, even for the hated Germans to do all this killing. They knew it was bad, but not this bad.

Pilecki would stay in the underground army and fight in the Warsaw Uprising of 1944, he was later interned in prisoner of war camps, and after liberation in 1945 was assigned to the II Corps of the Polish Army in Italy, where he turned in his report about Auschwitz to the British.

For Pilecki, Auschwitz was the symbol of the Polish struggle for existence. He himself could never go back to a normal civilian life after his experience. He maintained contact with the underground resistance – now against the Soviet Union – after the war, and indeed returned to Poland in late 1945 to report on the Soviet occupation.

He lived and worked undercover, but on May 8, 1947 the Ministry of Public Security captured him. He was tortured and dragged before a kangaroo court and accused of many things, including espionage and planning an armed uprising. The sentence was death. On May 25, 1948, in the Mokotow Prison in Warsaw, Witold Pilecki was executed. His final resting place is unknown. In 1990, Pilecki – and others from that show trial – were rehabilitated and today, he is celebrated, and for good reason, as a Polish patriot and hero.

If you prefer a visual representation of this story, watch our Sabaton History episode, Inmate 4859 – Witold Pilecki: