The Battle of Castle Itter

At the beginning of the end of the Third Reich in World War II, the Allies planned the invasion of the German homeland. Rumours had long circulated about an impregnable alpine fortress, stretching over the north western part of Austria, into which Hitler and his loyal followers would retreat if the war came to the Reich itself. The Allies were concerned about deep underground bunkers blasted into the high mountains which could stockpile guns and supplies. Such a fortress could prolong the war for several months. Most of their fears were of course unfounded, but deep within northern Tyrol, there stood an old fortress.

Schloss Itter had been a medieval castle, its foundations can be traced back to the 13th century. Over the centuries, the castle had fallen into ruin until it was rebuilt in the 19th century. In 1943 it had been seized by the SS and incorporated into the Dachau concentration camp system. The old fairy-tale-like castle became a prison for high-profile inmates. Some of France’s most influential politicians and generals, such as Édouard Daladier, Maurice Gamelin, Michel Clemenceau and Paul Reynaud, were held there.

By the end of April 1945, the noose was tightening around the Germans. The Red Army marched deep into Hungary from the east; the German forces had surrendered in Italy to the south; and the Western Allies advanced towards Tyrol from the west. What was left of the shattered remnants of the German army flooded back into Austria, and Tyrol grew full of the last die-hard Wehrmacht and Waffen SS troops, whose mere presence would keep many other soldiers from surrendering.

But there was also another group there that is often overlooked: the Austrian resistance. After the Anschluss in 1938, there had always been a number of native Austrians who stood against the Nazis. For many years they could only offer passive and non-violent opposition, but with the Allies just a few miles away, they could finally act. They provided valuable intelligence about the German defences and directed the army spearheads through the Inn River valley. Their most important goal was to protect the Austrian civilians from bloody reprisals by the SS. People were already hanging white flags and Austrian flags from their windows, and the SS did not hesitate to open fire on these ‘defeatists’.

The French VIPs draw up a plan

The mood inside Castle Itter was dark. The French VIPs – Very Important Prisoners – feared that the SS guards would rather execute them than release them to the Allies. But on May 4, after the last commander of Dachau shot himself in his quarters and the SS officer in charge took this as his cue to disappear, the castle was suddenly empty. Reynaud and Clemenceau took a stroll out of the castle gates and into Itter village, but quickly turned around. The roads were still full of patrolling SS troops setting up roadblocks and machine-gun posts. Back in the castle, the French VIPs discussed their situation. It was clear that they were still trapped, and that it probably wouldn’t be long until the SS reminded itself of their existence, so they came up with a plan. First, they would sew together a French tricolour banner and hang it from the inner walls to alert Allied aircraft of their presence. Next, they would get in contact with a rather unlikely member of the Austrian underground resistance. SS Captain Kurt-Siegfried Schrader was highly decorated and had served as a bodyguard in Hitler’s headquarters. After being severely wounded in desperate fighting in France, he broke with the Führer and defected to the resistance. Schrader promised to help, but he knew that his authority could only buy them some time. If any higher ups in the SS decided to storm and kill everyone inside, his rank could not prevent it. All agreed that only the quick arrival of the US Army would save their lives.

They sent out the Czech cook to establish contact, but halfway to the American lines, in the town of Wörgl, he was nearly caught by a patrol, but being pulled into a nearby house saved his life. His saviour was Major Josef Gangl, who was a career soldier in the Wehrmacht since 1935. From the war’s beginning, to Stalingrad, Normandy and Bastogne, Gangl had seen everything, but he too had returned a disillusioned man, and like Schrader, chose to betray his oath to the Nazis. It is not known how such decorated soldiers gained the trust of the resistance, but at that moment it mattered little. Gangl and the Czech cook set out to find the Americans.

Driving just a few miles cross country, they suddenly spotted several Sherman tanks in a small village. Slamming on the brakes, Gangl, still wearing his uniform, got out with his hands in the air. He was led to the nearest US officer, Captain John Carey Lee. After listening to their story, Lee radioed headquarters, and after a quick exchange, the 27 year old former college football star from New York enthusiastically declared that they were going on a rescue mission.

Lee’s unit was part of the 12th Armored Division, which now, after Hitler’s death, was not quite as enthusiastic as their captain to risk their lives fighting die-hard Nazis in the final hours of the war. Lee, however, was determined, and set off with his ad hoc task force of seven Shermans. His own tank, the ‘Besotten Jenny’, took the lead. At the next river, only four of his tanks were able to cross a wooden bridge before it gave way. His force reduced, the column rumbled on. Arriving in Wörgl, they were warmly received by the Austrian resistance and joined by a group of German soldiers, loyal to Gangl. Although the Waffen SS had left Wörgl, Lee left two of his tanks behind to support the resistance in case they came back. The two remaining Shermans, ‘Besotten Jenny’ and ‘Boche Buster’, moved on with the Germans in tow. Close to Itter village, they had to cross another bridge, which had already been wired with explosives. Lee ordered ‘Boche Buster’ to stay behind and guard their only route back. Without further incident, ‘Besotten Jenny’ and around a dozen American and German soldiers arrived at the castle gates. While the men went inside, Lee ordered ‘Besotten Jenny’ to turn around to block the entrance.

In the castle, perhaps one of the most unlikely scenes of the war then took place. An American Army captain, a Waffen SS officer and a German Army Major made a plan to defend French hostages from loyal Nazis in a medieval Austrian castle. Schrader reported seeing several Waffen SS trucks moving around, carrying anti-tank guns. Lee, knowing that American reinforcements were on their way, ordered the French prisoners to seek shelter in the keep while the soldiers took guard at the castle walls. They were only lightly armed, with rifles and submachine guns, but the firepower of ‘Besotten Jenny’ would give them a chance. Lee went to bed, but it would be a short night.

It all kicks off 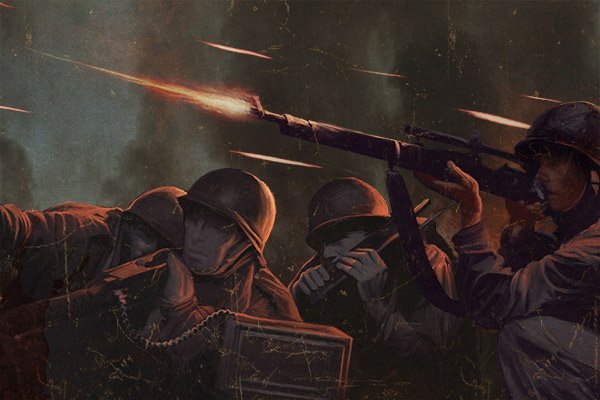 At 04:00, he awoke to the sound of gunfire. A German MG42 was firing at the gatehouse and Jenny’s 50.cal was answering. Tracer rounds were flying through the dark as the men on the western wall suddenly spotted SS men carrying grappling hooks. The SS was clearly looking for a way in, but the fire from the defenders had spoiled their plans so far. Gangl, Schrader and their ‘Castle Krauts’ kept them at bay, firing from the upper floors while the Americans defended the gatehouse. Trust between the Germans and Americans had been shaky at best, but now none of them would survive if the SS got in.

Shortly after 08:30, things got real. They spotted a 20mm anti-aircraft cannon and an 88mm gun northwest of the castle, with truckloads of Waffen SS soldiers arriving. The first 88 shell smashed into the castle and the whole structure shook. Then a staccato of 20mm shells began blasting small gaps into the walls. Things went from bad to worse. ‘Besotten Jenny’ rocked violently backwards. Seeing fire spurting from the engine access grills, the crew jumped out of the burning Sherman tank, just in time, before a second anti-tank shell sealed its fate.

With their chances of survival now seriously reduced, the French VIPs took up arms and joined the defenders at the gatehouse. The elderly Reynaud – France’s Prime Minister early in the war – fired his MP40 through the open window and Gangl ran over to help, but he didn’t get far. The man who had seen the European part of the war from the beginning to its final battle was killed by a sniper. With more 88mm rounds smashing into the castle walls, however, there was no time to mourn him. Waffen SS soldiers were moving up the slopes, pressing the attack home. With the radio blown to pieces, Schrader directed Lee to the castle telephone. Reaching the resistance back in Wörgl, Lee yelled into the telephone that they were in need of immediate assistance or they would soon be shelled to pieces. Then another round exploded against the castle, and the line went dead.

Germans, Frenchmen and Americans fought for their lives, but ammunition was running low. With Gangl dead and several Wehrmacht soldiers wounded, they were close to being overrun. Lee began pulling the defenders off the walls and deeper into the keep, as he saw a squad of Waffen SS close to the gatehouse. Just as they brought a Panzerfaust into position, a sudden rattle of heavy machine guns tore into them. The cavalry had arrived, and just in time! With the additional firepower of the American tanks, the battle took a decisive turn. The remaining SS troops quickly dispersed into the woods, and the castle was saved. All the French VIPs had survived, thanks to one of the least likely alliances of the war.

The incredible story of the Battle of Castle Itter inspired our song ‘ The Last Battle ‘, which is featured on our album, The Last Stand. Take a look at the lyrics we wrote here.

If you’re interested in a more visual interpretation of the above story, watch our Sabaton History episode, The Last Battle – The Strangest Fight of WWII: